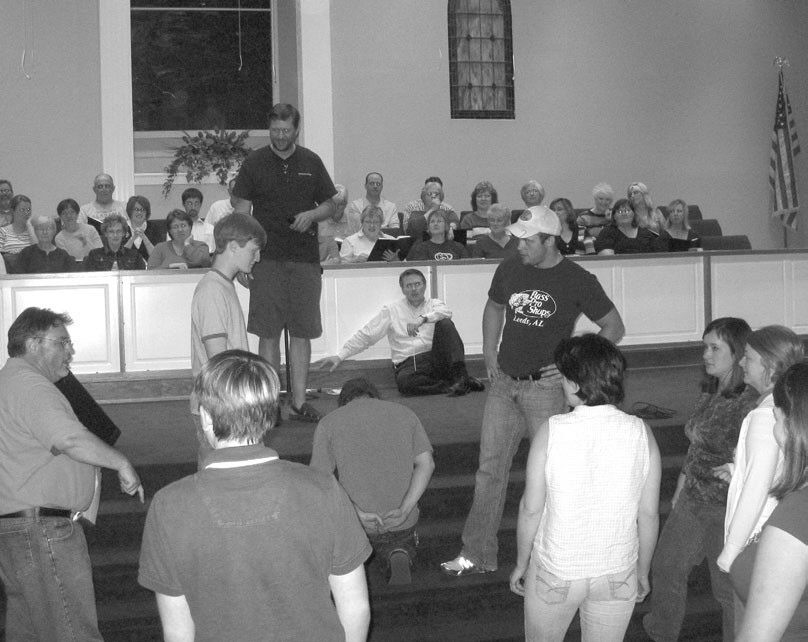 Pastor Rick Dill, left, directs a rehearsal of “Once Upon A Tree” at Cleveland First Baptist Church, while the choir looks on. The program, starting out as an Easter musical, has been transformed into a musical drama with Dill drawing triple duty as dramatist, stage director, and choir member.

Cleveland First Baptist Church will present a musical drama “Once Upon a Tree,” Palm Sunday, April 5, at 6 p.m. The score features solos by choir members Darren Wade as Jesus, Benny Green as Pilate, Judy Tatum the lead in “Guilty of Innocence,” and Kelly Moon as Mary, singing the lyrical “Now It’s Time to Rest.” Soloists and singers from neighboring churches will join the Cleveland choir and soloists.

“This is one of the most powerful pieces of music we’ve ever sung,” said Chris Green, Cleveland First Baptist minister of music, who will lead the choir. “I think it’s fair to say it breaks the mold for Easter musicals that many of us have heard and sung over the years….You’ve got to hear it – and feel it – to understand….I’ve never directed a work where the solo performances are so moving. This is going to be a program we all remember for a long time. We invite the entire community to come share it with us.”

Cleveland First Baptist pastor Rick Dill adapted the script to provide stage directions and speaking parts for members of the dramatic team, who will represent characters of the time such as the disciples, Pilate, the crowd during Jesus’ triumphal entry and later at the crucifixion. The last supper and the arrest scene in the garden of Gethsemane are also dramatized.

“We started with a conventional musical with narration and transformed it into a musical drama,” said Dill – dramatist, stage director, and choir member.

“There are a number of speaking parts in the drama, and in other places the people in the drama are acting out the action described in the narrative. About 40 people are in costume including the crowd scenes. Sometimes they’re coming in and going out four different doors; that gives you an idea of the challenge of staging the production,” Dill said.

Dill said a high point of the program is Pilate’s confrontation with a crowd of about 30. Drama and music converge, as Pilate first addresses the crowd, then sings his powerful protest to the shouts of the crowd and the throbbing chants of the choir to “Crucify Him.”

Dill said the production is a complex collaboration between the choir, the dramatists, and the sound system technicians. “This is the first time we’ve done anything of this magnitude. It’s all local church people, and I think it’s going to be unforgettable,” he said.

He said the program takes the Easter story through the crucifixion, leading up to, but not including, the resurrection. That will be the theme of Dill’s sermon on Easter Sunday.