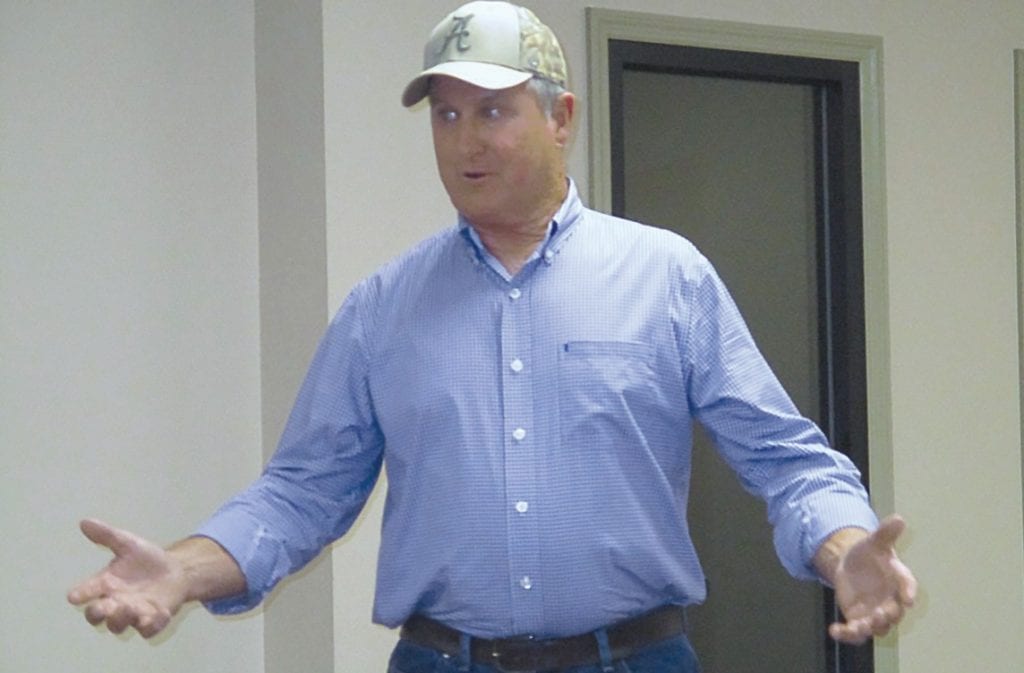 Bud Adams of B&B Tire Landfill, who wants to open a tire landfill near Cleveland, faces a barrage of questions at last week’s meeting whose primary purpose was to answer questions from the public.

A public meeting at Cleveland Community Center last week about a proposed tire landfill location off Hazelrig Road near Cleveland generated energetic questions from the audience of about 100. The meeting was conducted by Bud Adams, operator of a tire landfill off County Road 9 in west Blount County that is at or nearing capacity.

Adams made a brief statement describing his operation, then took questions from the audience during the remainder of the two-hour meeting. He said the size of the landfill site proper is about 20 acres, although he owns and leases about 140 more acres that will not be affected. The life expectancy of operation at the site is 15 years.

Details of the expected impact of the operation are summarized below. Some are taken from Adams’ initial presentation, some from his answers to audience questions, and some from the application submitted to the Blount County Commission for approval of the proposed site. Audience questions, stand-alone facts

• Will household garbage and materials other than tires go into the landfill? No. Permit is only for rubber materials: tires, rubber conveyor belts, and some other rubber fragments.

• ADEM (Alabama Department of Environmental Management) regulation: Adams: Regulation is intensive; inspections for compliance occur every one to two months, sometimes more often. “If you get out of line, they come down on you hard with fines and penalties. I like to ask the inspectors what they’re looking for when they come to do an inspection. They don’t mind telling you, and then I make sure I take care of any problem they see. I try to do more than what they require. Anything we do, any change we make, ADEM must approve.” B&B Tire Landfill at the existing location has operated 21 years without a written violation from ADEM.

• Are prohibited materials ever slipped in? Adams: “I live here! I don’t do that. A man from Chicago called several years ago and wanted me to take a lot of barrels – said other landfills in Alabama were doing it. I told him no. He called back later and said name my price to take those barrels. I told him I wouldn’t do it and told him to lose my telephone number and never call back. Should have turned him in to ADEM, but I didn’t think of it at the time.”

• Will rain water collected in exposed tires be a health hazard due to mosquitoes? Adams: ADEM requires exposed tires to be sprayed for mosquitoes every seven days and buried after 30 days. ADEM inspects regularly for compliance.

Pollution and the river, etc.

• How far will the landfill be from the Locust Fork River, and will runoff from tributary streams pollute the river? The landfill is about one half mile at its closest point to the river. Adams: Rainfall falling inside the landfill area will not affect the river since buried tires are chemically inert to water. So the leachate entering the water table by saturation will not be contaminated by passage over the chemically inert rubber. Tires are degraded by air and sunlight, which they are protected from by at least three feet of dirt. Some of the runoff from rain falling on the exterior slope of the landfill is captured by the engineering design for recycling inside the landfill. The remainder flows into one of two settlement ponds, thus meeting ADEM surface water drainage requirements.

• What’s to prevent the landfill owner from selling its permit to another operator? Adams: “I wouldn’t do that. This is a family business. If it doesn’t make a profit, I’ll close it, reclaim it, and go home.”

• How many trucks and what kind of trucks will typically haul tires to the landfill? Four or five 18-wheelers and 10 to 15 gooseneck trailers per day. Approximately 20 a day total.

Why not recycle used tires? Adams: Recycling used tires is not economically feasible so far. It’s cheaper to make new tires out of raw materials rather than recycled materials. Firms that have tried it have gone bankrupt. The few rubber products that can be made using recycled rubber have a neglible affect in reducing the volume of the vast number of tires to be disposed of.

The source for most of the information above is Bud Adams, the operator of the landfill applying for permission for the new site near Cleveland. It’s fair to ask to what extent the public can rely on his answers.

District 1 Commissioner Allen Armstrong has known Adams well from his years as a commissioner in the area which includes B&B Tire Landfill and has had dealings with Adams in that capacity. In addition, Armstrong is responsible for the county’s sanitary landfill located in District 1, and has had his own encounters with ADEM. So his answer to the following question is qualified.

What kind of a landfill operator is Bud Adams? Does he operate lawfully and consistent with the economic, environmental, and esthetic interests of the surrounding area? Armstrong: “He does. He runs a jam-up operation. He wants to do the right thing. Bud Adams has never told me a lie. If he tells you he’ll do something, you can take his word on it. You can take it to the bank. And he does as much as he can for the quality of life of the area.”

The process for approving or denying B&B Tire Landfill’s proposal to relocate its operations to the Cleveland site entails three more public meetings listed below.

• A public hearing conducted by the Blount County Commission on Nov. 14, at 9 a.m, at the courthouse, to hear public expressions in favor or opposed to the proposed new landfill.

• A meeting of the Blount County Solid Waste Authority on Nov. 29, at 4 p.m., at the courthouse, to develop a recommendation to the Blount County Commission on approval or denial of the B&B Tire Landfill application.

• A business meeting of the Blount County Commission on Dec. 10, at 9 a.m., at the courthouse, at which the commission will vote to approve or deny the B&B application.

The process then moves to the Blount County Circuit Court for approval, then to ADEM for final approval or denial.