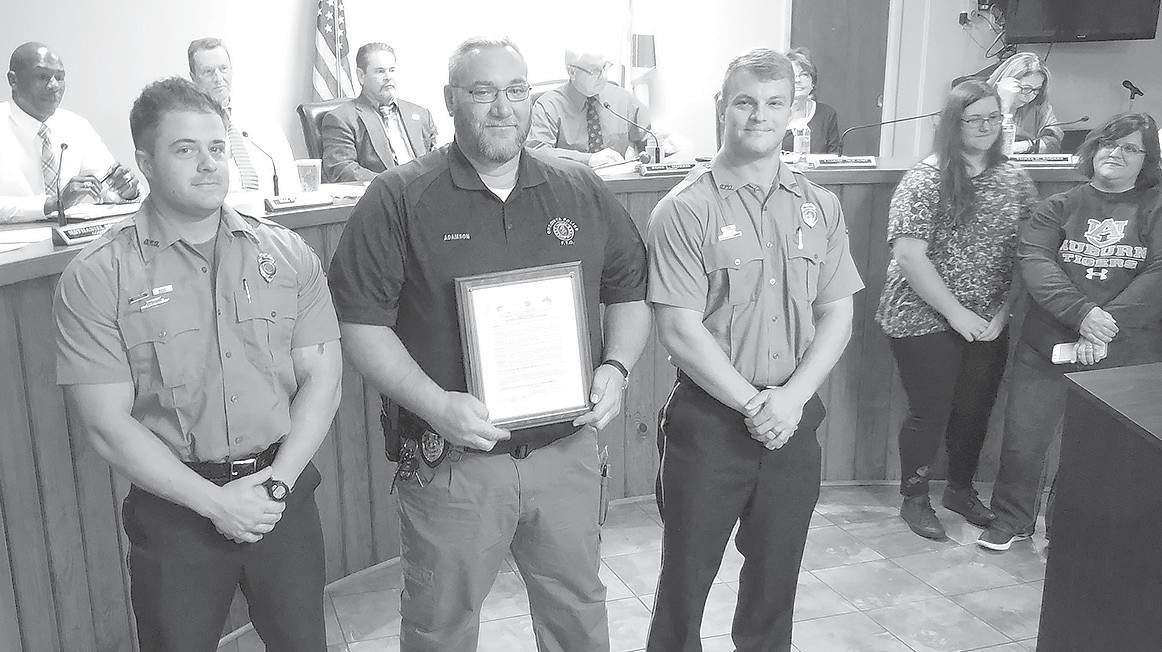 Speaking later, fire Chief Arthur Willis emphasized that some 250,000 people annually experience similar situations and that the first 10 minutes prove critical to their survival. He noted Adamson acted within that time window.

While not diminishing the role of his officers, Willis noted that they are trained for these situations and that such is part of their regular jobs. He praised city officials for their wisdom in providing police the CPR training. Clifton said that Adamson had had previous occasions to act similarly in circumstances which most officers never experience in their careers.

Clifton apologized to Adamson for lying to him to procure his attendance at the surprise presentation. Adamson’s wife, son, daughter, Dodd, and Page joined the corporal for the presentation. Mulkey recently retired from the department. Wrecker impoundment charge

Prior to the Nov. 28 regular meeting, the council held a public hearing, receiving information relevant to rotational wrecker service providers asking for an increase in city fees for impoundment. Public safety director – administrator Brandon Horton offered that the city’s present $75 charge for the service with an additional $10 administrative fee falls well below that of the county and many other nearby municipalities. The county charges $150 and several municipalities charge $200 or more.

Jason Moore of Skint Knuckle Garage and Towing and Tonya Glover of Glover Wrecker Service spoke in favor of the increase. Councilman Richard Phillips indicated his belief that should the council raise the charge, it should also raise the administrative fee.

Councilman Hal Blackwood verified that the previous charges had been set in 2015. Councilwoman Tonya Rogers noted her awareness that Tuscaloosa charges $180.

Horton noted that the city would still expect those whose vehicles are towed would have daily opportunities to retrieve their vehicles within reasonable hours. He also explained that neither the companies nor he were seeking action that evening but hoped the council would consider the request and act upon it positively and soon. Personnel and other

Council members voted to hire Anthony Vaughn as a full time public works employee. They also added Jonathan Ballew and Ryan Pinyan as part-time police officers. They confirmed the reappointment of Barbara Andersen and Daniel Warden to the zoning board of adjustment and accepted the resignation of Rebekah Hollingsworth from the police department.

Members voted approval of the proposed 2018 employee holiday schedule. That schedule matches the county’s and provides the usual state holidays with an additional day at both Thanksgiving and Christmas. In another holiday matter, councilors accepted Mayor Ross Norris’s recommendation to move their regularly scheduled Dec. 26 meeting, a city holiday, to Thursday, Dec. 28.

The council voted to declare the structure at 100 First Avenue West, as surplus, a precursor to likely later sale. Members voted to award the contract for construction of the Wallace State – Oneonta main campus building, across from the surplus property structure, to Carmon Construction Inc. of Albertville.

City manager – economic developer Ed Lowe reported Carmon had the low bid of $3,384,844. City attorney Alex Smith noted that contractors had reviewed the bid and determined it met all required specifications. On recommendation from Norris the council recessed into executive session to discuss current and potential litigation. Councilmen Nathaniel Butler and Danny Robinson joined Norris, Phillips, Blackwood, and Rogers for the meeting. The council has designated the second and fourth Tuesdays of each month and 5:30 p.m. as its regular meeting nights and time. Members meet in council chambers at city hall.