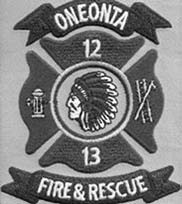 Oneonta city councilor Tonya Rogers announced her city’s fire department has received an almost $175,000 grant. She and other council members praised the work of firefighters Josh Gibson and Jonathan Ledbetter who wrote the grant which entails a 5 percent ($8,714) match from the city.

Fire chief Arthur Willis elaborated on efforts of his men, including Dalton Teal who played a role in editing the application. The FEMA grant will be used for new equipment, including new lighterweight air packs for use inside burning buildings.

In other action at the rescheduled regular June meeting, councilors voted to advertise in-house for a revenue clerk to succeed retiring Deana Johnson. In a related matter, members also voted to advertise for a clerk/receptionist. City manager Ed Lowe explained that the present clerk/receptionist has expressed interest in assuming the revenue clerk slot.

At the absence of an OBA (Oneonta Business Association) representative, Lowe explained that that organization’s members were meeting while the rescheduled council session was underway. Those members were helping prepare for the June Fling set for June 6.

Other members (Mayor Ross Norris, councilmen Hal Blackwood, Mark Gargus, Tim McNair, and Danny Robinson) joined Rogers for the June 2 session. The council held the meeting a week early due to commitments for their usual second Tuesday of the month. The next regular meeting will be the fourth Tuesday of the month at 5:30 p.m. in city hall.