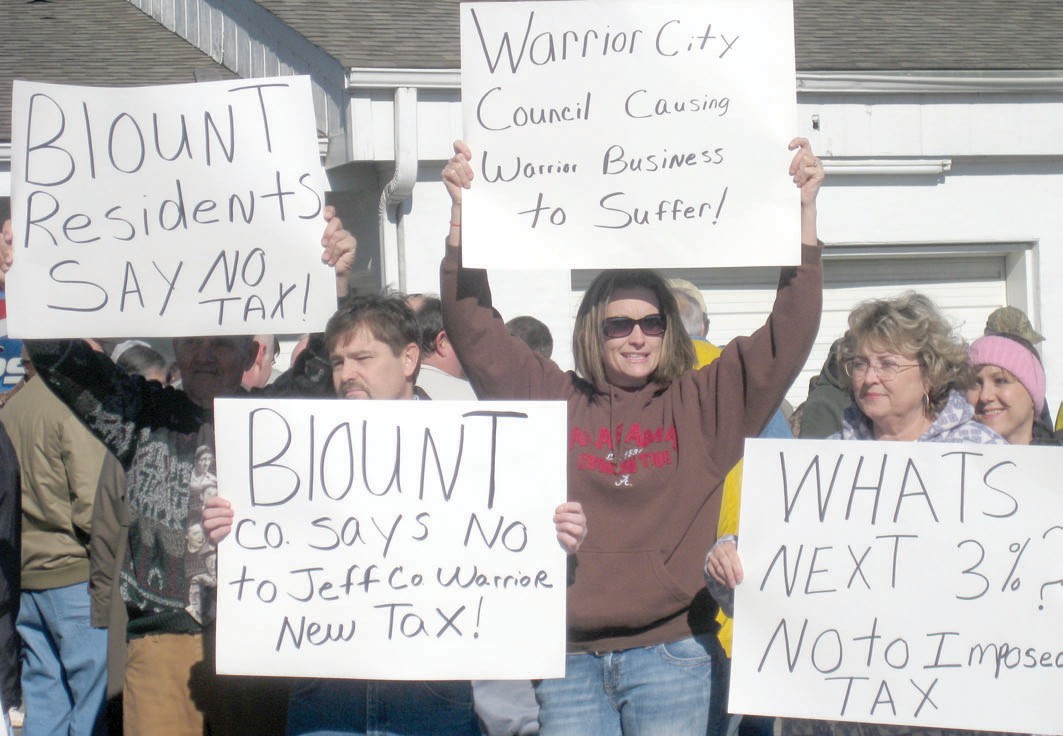 A dozen of the 200-odd citizens attending the rally at Logan’s Store Saturday carried signs protesting the Warrior Town Council’s action imposing a tax on Blount County businesses lying within its police jurisdiction.

A crowd of more than 200, with what appeared to be that many or more vehicles, swarmed the area around Logan’s General Store Saturday afternoon to attend a rally protesting what many of them consider a “tax grab” by the town of Warrior.


The group stood in 30-degree weather for almost an hour to hear county officials and two state legislators speak on resisting the town’s plan to cross county lines to impose taxes on Blount County’s citizens. (Background: the Warrior town council
passed an ordinance on Dec. 7 resolving
to collect sales taxes equal to half of that
imposed within its corporate limits on
businesses lying outside its corporate
limits, but within its police jurisdiction.
Warrior’s police jurisdiction, as defined
by statute, extends roughly 1.5 miles
into Blount County.)

Projected probable location (red curved line) of Warrior police jurisdiction in west Blount County. Map is based on projecting a perimeter 1.5 miles beyond Warrior city limits as shown on current U.S. Census Bureau records. The boundary would cross Ala 160 about two miles east of I-65, near the location of Hydra Service. It would take in more than 40 Blount County businesses along the Ala 160 corridor, and would also include most of West Blount Industrial Park.

The action infuriated a group of Blount County business owners and officials who attended the Dec. 22 Warrior town council meeting to ask them to reconsider taking the action – only to be told the ordinance had already been passed two weeks earlier, with no consultation with or notice to any of those affected. 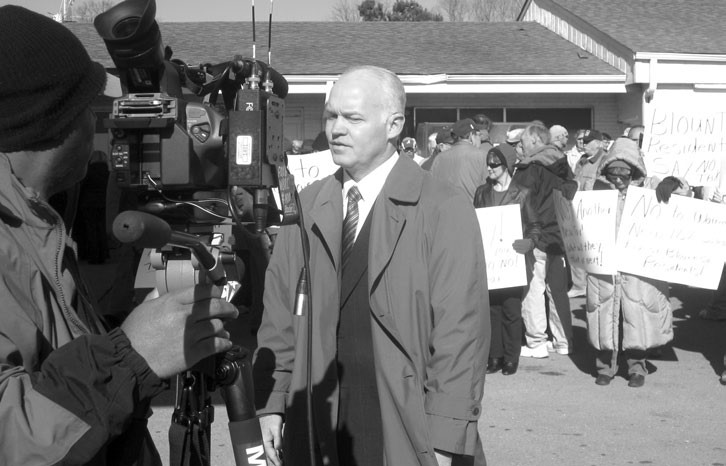 Questioned by Blount County representatives as to what services the town would provide in exchange for the taxes imposed, attorney Joe Wilson, speaking for his law partner and town attorney Jim Ward, said the town has the authority to extend the tax within its police jurisdiction without providing any services beyond those currently provided. Wilson avoided questions aimed at detailing exactly what law enforcement services are currently provided.

“We’re going to do whatever necessary to stop this action,” Blount County Probate Judge and Commission Chairman David Standridge told the reactive group of citizens on Saturday. “This is just wrong. It goes against everything this country is founded on – taxing people without their consent and without providing services in exchange. We’re committed to looking at court action. We passed a constitutional amendment (in the 2008 election) to stop this kind of thing. If they wanted to do this the right way, they could’ve asked the people of Blount County to vote on how they feel about this action. I don’t think they want to know how you feel.”

Standridge continued: “The Blount County district attorney is considering filing suit, and the county commission is looking for ways it can provide support. Our state legislators Elwyn Thomas and Scott Beason have told me they’re going to do whatever they can to stop this action in the Legislature, both for now and in the future.” Standridge was interrupted by applause three times during his informal talk.

State Rep. Elwyn Thomas also addressed the crowd: “Last year you voted overwhelmingly to prevent annexation by an outside municipality without a vote of the people of Blount County. This is exactly the kind of situation that amendment was intended to prevent. The intent of that amendment will weigh heavily with the judge if this comes to court. But if we don’t win the legal issue, we’ll win it in any way possible – by a boycott or whatever is necessary.”

State Sen. Scott Beason opened with a lighter touch: “If they were going to do this,” he said, referring to the Warrior Town Council, “the least they could have done was to wait until June when the weather was decent. They have no respect.”

Referring to the legislation allowing municipalities to extend their taxing authority into their police jurisdiction, Beason said, “When the Legislature passed this six, seven, maybe even 10 years ago, nobody anticipated a town crossing a county line to collect taxes on another county’s citizens for services they’re not providing. The best thing for everyone would be for Warrior to quietly pass a motion rescinding it.”

District Attoney Tommy Rountree, put the matter in more dramatic perspective: “Two hundred years ago or so, a man by the name of George over in England decided to tax a ragtag bunch of colonists in this country for tea – without their consent. They didn’t stand for it then and we won’t stand for it now. They can tax themselves, but they can’t tax us. My staff and I will have a lawsuit ready to file by the end of next week,” he said.

District 1 Commissioner David Cochran encouraged citizens to stick together, inviting them to attend the Monday, Jan. 4, Warrior council meeting and to support the effort to prompt Warrior merchants to put pressure on the council to rescind the ordinance.