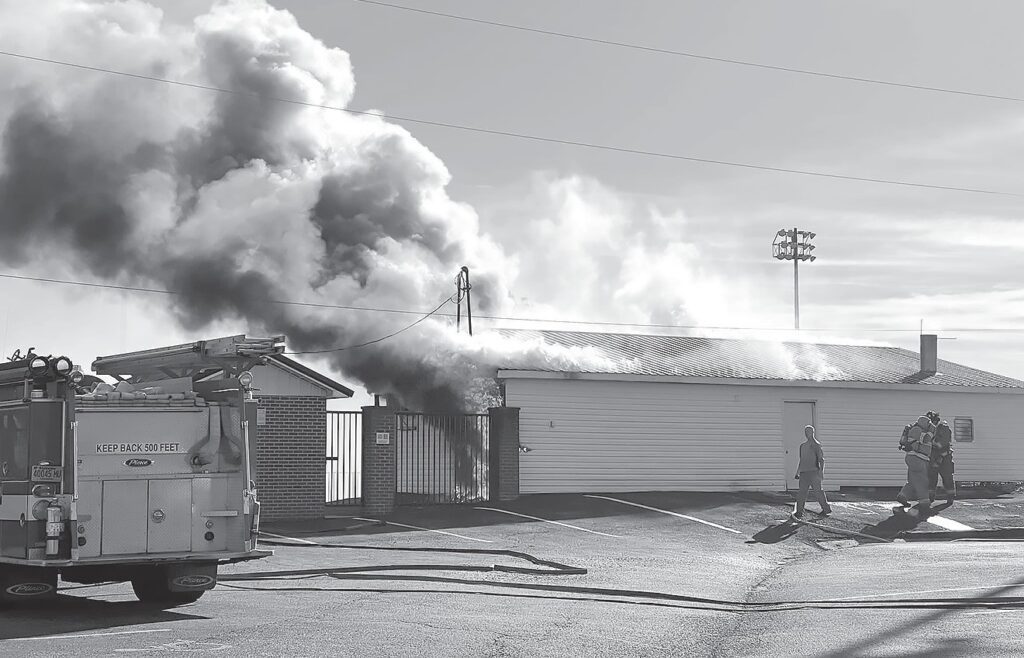 As the Cleveland Panthers were preparing for what was then their biggest football game of the season last Thursday, members of the Golden Force Marching Band Boosters were finalizing the stocking of the concession stand with necessities to keep the fans happy and content while watching the semifinals take place at their home stadium. But the latter would not happen. Sadly, the building was likely a complete loss when it became engulfed in flames Thanksgiving morning.

According to CHS principal Brandon Smith, he received a call at approximately 8:45 a.m. from the football coach advising him that the concession stand was on fire. Smith immediately traveled to the school where he found the fire department, local police, and Alabama Power on site.

Although the flames had primarily been extinguished, the fire continued to smolder. The building remained erect; however, the fryers, coolers, additional food/drinks, and other equipment and supplies were gone, a total loss. Initial reports indicate the fire started in the corner electrical panel and traveled across the building. A combination of old grease and the fire caused the contents to burn quickly.

When band booster president Ray Makofsky and his son stopped by the school early Thursday morning, they too witnessed the devastating sight. The concession stand was in flames. It was bad, and after more than 25 years in existence, the building was no longer usable. Not only did it mean the building was lost, it meant that the marching band would also lose monies generated from the profits each time there is a home JV or varsity game.

Because the majority of the band’s funding comes from sales at the concession stand, they would temporarily lose out on buying new instruments they cannot get through school funding and maybe even the new band uniforms they were hoping to purchase for the 2022 season. The band would take a huge hit financially.

As news of the loss spread throughout the community, people began immediately stepping up to help. After all, the show must go on. Offers of donated trailers, food, and money began pouring in. Local schools immediately reached out to help. The community support was amazing despite it being Thanksgiving Day.

After the fire was under control and extinguished, Chris Lackey contacted Coca-Cola about the situation. Coca-Cola stepped up to the plate, and had a mobile drink truck at the field by 4:50 a.m. Friday. In addition, Tim Jones with J’s Cafe in Cleveland provided a food trailer to use, and S&S Foods donated part of the order needed to stock the trucks. There would be concessions.

And who was there to support the football team? The Golden Force Marching Band. Yes, they have temporarily lost their main source of funding, but it in no way negated their purpose last Friday night. They were loud and proud. And, to top it off, this group of band members will be the first in Cleveland’s history to perform at the state football finals on Friday. For the seniors, what a way to end your high school band career.

The fire remains under investigation. Anyone wanting to make a donation to the band can send a check to Cleveland High School Band, 71 High School Street, Cleveland, AL 35049, or drop it off at the school office. Smith said they are extremely thankful for not only the local community support, but the support extended from throughout the entire county.