Chase leads to car in pond, arrest of two women 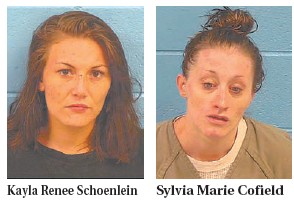 An attempted traffic stop in Sardis turned into a two-hour chase with speeds in excess of 100 mph in the early morning hours of Tuesday, June 20.

The ensuing pursuit went through Etowah County and Altoona before coming into Blount County on Ala 132, according to Altoona Police Chief Eric Doran.

Blount County deputies deployed spike strips to stop the vehicle and the car either hit the strips or wrecked while attempting to avoid the strips.

The car left the road and landed in a pond along the roadside, submerged in approximately 12 feet of water.

Two 25-year-old females – Sylvia Marie Cofield and Kayla Renee Schoenlein, both of Gadsden – were taken into custody at the scene and are being held in the Etowah County Jail.

Both are being held on charges of reckless endangerment and attempting to elude and Cofield is also charged with a probation violation. Their bond is set at $2,000 each. However, other charges from Altoona, Blount County and other jurisdictions could be filed later.

Divers had to be brought in to search the vehicle and to attach a tow line.