Growth, opportunity, teamwork, and cooperation. Those are ideals Blount County- Oneonta Chamber of Commerce strives for in its efforts to make a very good community even
better,
the motto furthered by Charles Carr, executive director, and the theme of the chamber’s 27th annual dinner May 11 at the World Outreach Center.

Carr said, “Each of us, as an individual, group, municipality, organization, county government, church or association, has a part to play in forming this beautiful mosaic called Blount County. 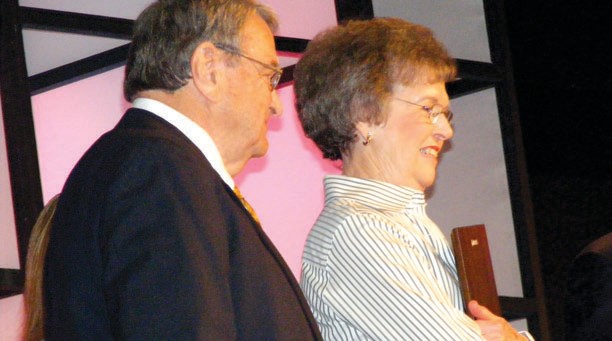 “Tonight, we will recognize an individual, business and industry leaders, and teachers whose work makes Blount County one of the best communities in the state.”

Dr. Charles Payton received the Pat Bellew Award for Outstanding Citizen. Dr. Payton came to Oneonta in 1968 when he took over the Animal Hospital from retiring veterinarian Dr. Ned Prickett. He extended the operation from a one-man practice to a partnership with Dr. Joe Hastings, including two associate veterinarians, one part-time veterinarian, three licensed veterinary technicians, and clerical and clinical staffs. In June 2005 after 37 years’ practice, Dr. Payton retired, although he continues to do some veterinarian relief work.

A 1961 graduate of Collinsville High School, Payton in 1968 graduated from the Auburn University School of Veterinary Medicine, which in 2008 granted him the Wilford S. Bailey Distinguished Alumni Award. He also received the 1998 El Toro Award for Excellence in Food Animal Medicine.

Dr. Payton has held membership in the Rotary Club, Blount County Cattlemen’s Association, the chamber of commerce, and Blount County Treasured Forest Association. He also helped establish an animal shelter in the county.

Payton is an ordained deacon of First Baptist Church of Oneonta, where he has taught Sunday school for at least 35 years. He is a charter member of Gideon’s International – Blount County Camp. He has worked with Christian Veterinary Missions and on Southern Baptist mission trips to Guatemala and Colombia.

He and his wife, the former Anne Boynton, have two children, Chuck and Rachel, and one grandchild, Payton, daughter of Rachel and husband Jay Baker.

Blount County’s industry of the year is Fieldstone Meats of Alabama. Owned and operated by Don Wilson, Fieldstone opened its doors as a state-inspected meat processing plant in 1975, when it employed 16. Today, Fieldstone employs 32 full time with a payroll exceeding $1 million.

The plant in 1992 added five smokehouses to its existing three, a maintenance shop, and new processing room, chill coolers, and raw-meat cooler. Since then new equipment, load areas, warehouse, and offices have been added.

Logan’s General Store is recognized as the Blount County business of the year. Located since June 1969 at the west end of Ala 160 at the Hayden-Corner exit off I-65, the store is owned by Bill and Lela Logan.

The Logans began with one employee and now have 12. Some employees retired with 22 years’ service, and most present ones have been at the store for 10 to 15. Over the years, Logan’s has employed some 130 different students.

Jim Carr, county school superintendent, introduced the two Blount County teachers of the year. Sheila Fallin teaches fourth grade at Cleveland Elementary and Nancy Caffee, seventh- and eighth-grade science at Cleveland High. Caffee was a finalist for the Alabama teacher of the year.

Fallin and husband Randy have five children, Nathan, Ashley, Joshua, Christian, and Micah, and four grandchildren. She has been teaching for 23 years, the last 11 grades three and four at Cleveland.

In her 24th year of teaching, Caffee is in her 11th year at Cleveland High. She and husband Scott have three children, Susan, Scotty, and Caroline.

Phillips and husband Terry have two children, Lindsay and Matthew. She has taught third grade one year and first grade six years.

A graduate of Oneonta High School, Faust and husband Neil have two sons, Dylan and Drew. She taught fourth and fifth grades at Hayden Elementary eight years and first grade for four. This is her 10th year teaching second grade at Oneonta.

Keith Bender, Oneonta High principal, recognized Don Camp as city high school teacher of the year. Camp, a graduate of Oneonta, returned to teach at his alma mater in 2000. He teaches advanced placement history and social studies. He is married to Brooke Hicks.

Carr also took the time to recognize the chamber board and staff.

“I would like to thank the chamber board of directors for their support, guidance, and leadership,” Carr said. “Energetic, civic-minded individuals who have the county’s best interest at heart describes the board and chamber officers.

“Kelley Cochran has done an outstanding job as chairperson. Our chamber is organized and focused due to the hard work of Aimee Wilson, the assistant director, who plays an important leadership role.”

Keynote speaker Stephen Foster Black concluded the evening festivities with a message about local community involvement. Black is the senior lecturer and director for the Center for Ethics and Social Responsibility at The University of Alabama as well as the creator of Impact: A Student Service Initiative.

“While Blount County has not been immune to the hardships brought on by the deepest national recession in many years, it remains a transitional area with constant change and growth,” he said. “Yes, Blount County is a special place with special people.”