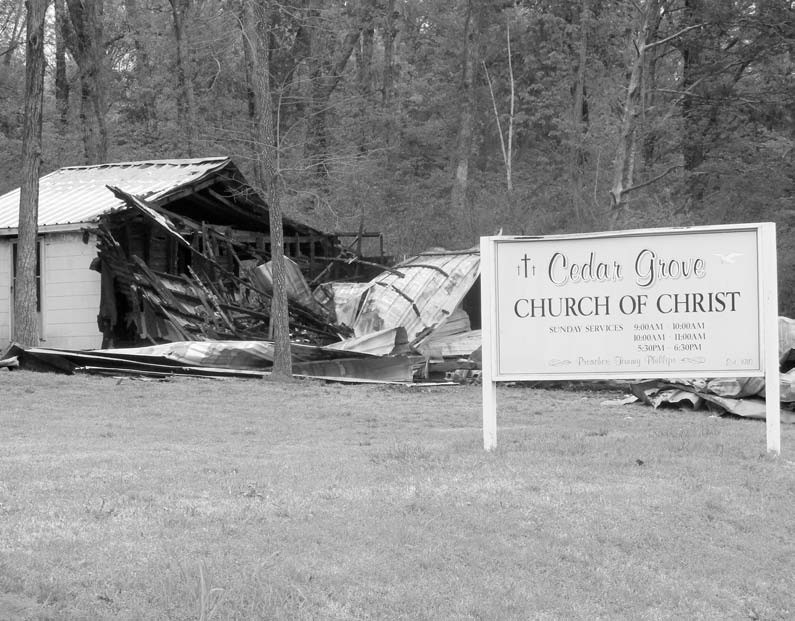 Cedar Grove Church of Christ, located on County Road 25 in Blount County about a mile from the Marshall County line, was destroyed by fire in the early morning hours of April 10. A criminal investigation of the fire as possible arson is being conducted by the Alabama State Fire Marshal’s Office. Anyone with leads or information about the fire is asked to contact the Alabama Arson Hotline at 1-800-654- 0775 or the agency’s website as www.firemarshal.alabama.gov.

Sherry Vanzandt, a member of the church, said the congregation normally consists of about 25 to 30 members, they intend to rebuild on the same site. The church was established in 1910, according to the sign in front of the building. Vanzandt said the burned building was built shortly after the founding date by another member of the Vanzandt family, Herman. Tommy Phillips is pastor of the church.

Daniel Blackmon, killed in a shootout with officers from Blount County and Marshall County on April 19, was originally considered a “person of interest” in the Cedar Grove fire by the state fire marshal. He has since been cleared of any involvement.