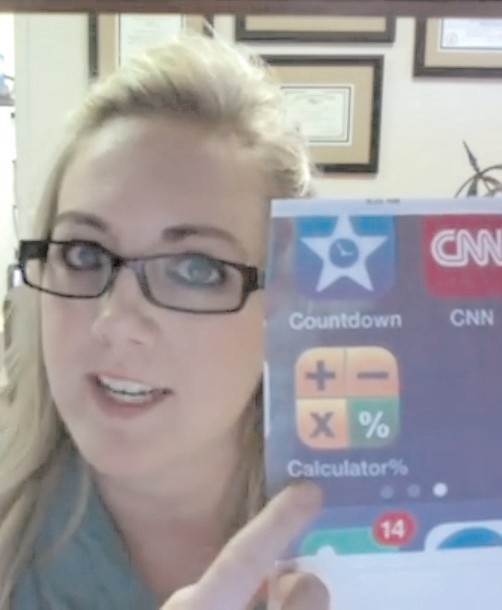 When District Attorney Pamela Casey posted a Facebook video last week to inform Blount County parents about a cell phone app, what happened afterward stretched farther than she could have imagined.

Now, she’s been featured on Good Morning America and interviewed by the British Broadcasting Company (BBC). All because her 2-minute video went viral with 5.4 million views.

It began when Casey was alerted by a concerned parent about an app called Calculator %. What looks like a normal calculator is actually a way for people, especially teens, to hide pictures by using a secret passcode typed into the “calculator.” Casey’s main concern was children and teenagers using the app to hide photos from their parents.

“I wanted to take a minute and let parents know about this,” Casey said in the video.“I encourage you to look at your child’s phone, and if you see Calculator % you are going to want to talk to your child about what their secret code is. In Blount County a parent of a student here called about this and as you and I know, if one child knows about it, many children know about it.”

Casey has been making these videos for months now and posting them on the Blount County 41st District Attorney Facebook page.

“It’s been a great way to interact with the public and inform about such things as scams that the media might not cover,” Casey said.“It’s also efficient because Facebook travels quicker than anything nowadays.”

This latest video is proof of that. After posting the video on Tuesday it has reached 7.8 million people and has been shared with others 120,000 times on Facebook. That doesn’t count the number of people its reached through other news outlets, and those who have seen it when it has been featured on news sites throughout the country and even all the way to Australia.

“It really wasn’t meant to reach that many people,” Casey said.“I could have never anticipated this sort of response. But from it, I’m glad parents have learned about these sorts of apps because there is a huge generation gap in the generation that uses phones constantly and the other generation that doesn’t know that much about it. I’ve received a lot of great feedback telling me how thankful they are I made this video, and I’m happy about that.”

Casey says she’s received more information about other types of apps that do that same thing as Calculator%, and she plans to post videos on them as well. Look for her next video in the coming weeks.