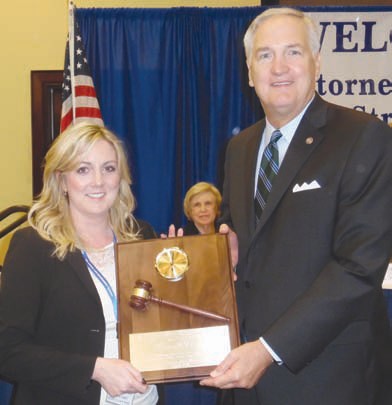 Blount County District Attorney Pamela Casey was awarded the State of Alabama Prosecutor’s Award at the annual Governor’s Conference held in Montgomery recently. The award is given annually by the Alabama victims’ advocacy group VOCAL (Victims of Crime and Leniency). The Alabama Sheriff’s Association and VOCAL sponsor the Governor’s Conference.

Nominations are sent from across the state and the award recognizes a prosecutor who exhibits exceptional perseverance and determination to get the job done and work with the victim and/or their family.

Casey has been appointed to serve as special prosecutor in Marshall, Walker, Cullman, Etowah, and Bibb counties by Attorney General Luther Strange. She received a record 27 nominations for the award, said Shelley Linderman, who serves on the selection committee.

“I am honored and humbled to have been selected to receive this award,” said Casey.“So many great prosecutors across our state, who I look up to, have been past recipients of this award. I am blessed to get to serve a county that I love and to get to pursue my passion to help others. I am also thankful for a wonderful staff that works with me to get the job done.”