CASA: looking out for the children 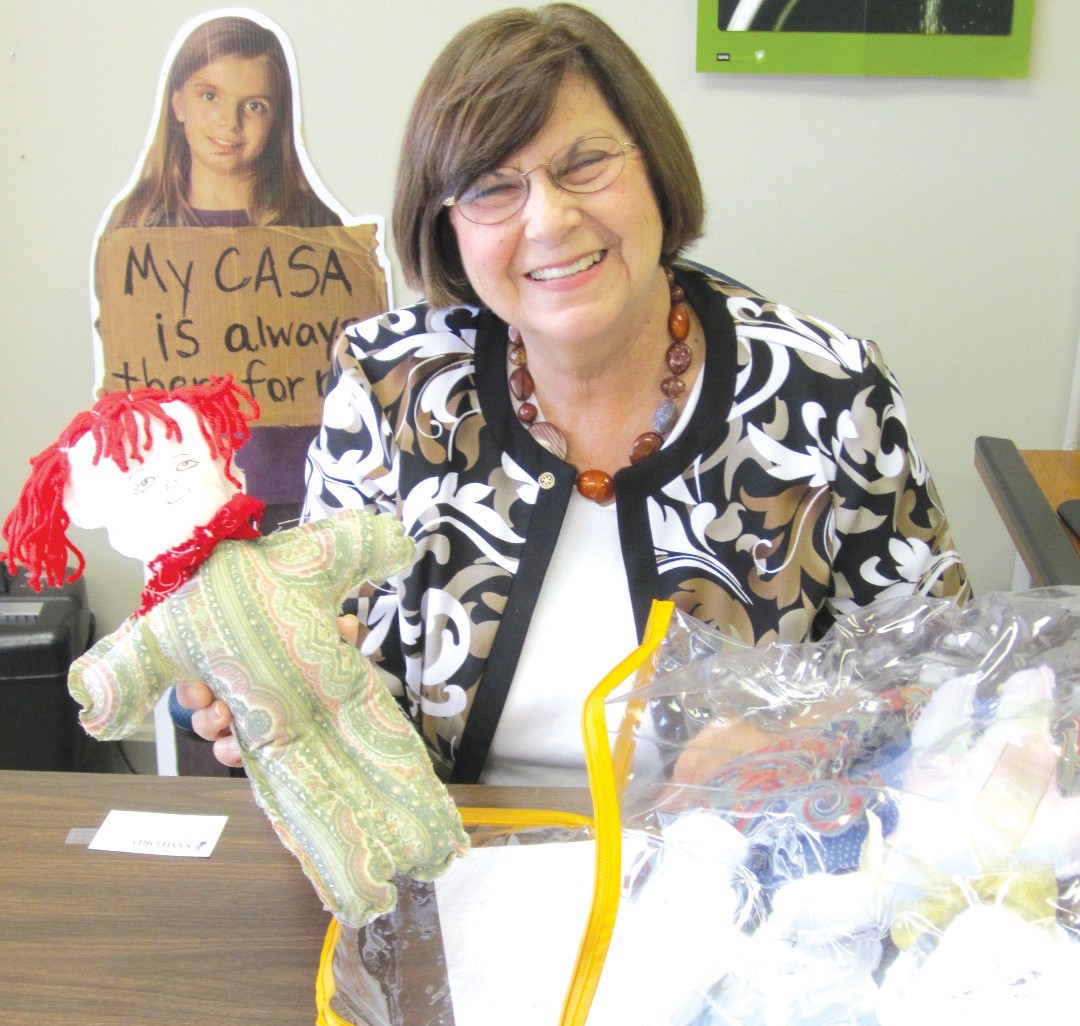 CASA executive director Sarah Calvert displays one of a sackful of rag dolls given to young children when they are initially assigned a CASA volunteer. The dolls were donated, along with a cash contribution, by women of Pleasant Mount Baptist Church. Other churches have pitched in to help the cash-strapped CASA organization as well.

CASA stands for court-appointed special advocate. It is a small cadre of dedicated, stress-tested volunteers who are appointed by the court and trained to protect the interests of neglected, abused, and/or abandoned children who have come before the district court for a dependency hearing – a legal proceeding to decide where and with whom a child shall reside after having been removed for the child’s own welfare from the home where the child resides, usually with a natural parent or parents. Many of the same considerations apply for CASA when the legal proceeding is a custody petition.

In a nutshell, the CASA volunteer provides information – sensitive, intimate, often crucial information concerning the child’s (or children’s) living conditions, the quality of routine care they’re getting (food, shelter, safety, emotional support) and any risks or hazards to their welfare they are exposed to in the home, such as physical, emotional, or sexual abuse. That level of fact-finding applies not only to the home where they’re living, but also to any other home and caregivers to which the child might be assigned by the court – relatives, foster parents, or other interested parties.

The volunteer gathers this information by talking to the child, the parents, relatives, teachers, neighbors, professionals (doctors, psychologists, etc.) and others with whom the child has contact. CASA has court-ordered access to all records – school, medical, dental, mental health, police. The object is to provide a comprehensive view of the child’s world – from the point of view of the child, but as seen through an adult’s eyes. That information is then made available to the child’s legal representative – the guardian ad litem appointed by the court – and to the court itself.

The CASA volunteer is often required to testify in court concerning the information they have provided, and that requirement can create substantial stress. They’re subject to cross examination, which is often no picnic. From the standpoint of the volunteer – who may feel they know more about the totality of the child’s life than either “side” in the discussion – no less than the child’s life and future is on the line.

Needless to say, the CASA volunteer and the children to whom they’re assigned often develop a close and emotional relationship.

The environment in which CASA factfinding takes place is usually a difficult one. In layman’s terms, many of the situations would be described simply as dreadful. The volunteer’s work occurs in a setting where parents, relatives, and others often give conflicting, ambiguous, argumentative answers. Sometimes they lie. More often they shade the truth. Frequently, the children themselves are coached on what to say, and may be threatened on what not to say. What’s needed is a detective’s modus operandi, a psychic’s sense of intuition, and a guardian angel’s devotion to duty.

Getting down to cases

( The following is the story of a CASA child from another state, taken from her own words.)

Lauren’s story: When she was seven, she, her mother, and little sister escaped from her mother’s abusive second husband and made a cross-country journey from Ohio to Colorado. The mother drank and was frequently abusive. Lauren lashed out and rebelled.

Her mother then had Lauren medicated. At age 10, she was on Ritalin, Prozac, and other drugs. Lauren began running away from home to escape. Then her mother had her institutionalized, and Lauren began her journey through foster care. After her experience there, she met the CASA volunteer who would change her life.

“I felt like Stephanie would protect me the way I tried to protect my younger sister,” Lauren said. “I could tell Stephanie would never let me down. I never felt like there was anything more important to her than her time with me. I trusted that she would stand up for me and speak on my behalf when I needed a voice more experienced than my own.”

Stephanie helped Lauren discover that serving others was what she wanted to do with her life. She is now a student at Denison University with a full scholarship, a part-time job, and a fellowship in her major. She is also still involved with CASA, as a spokesperson at national events.

As reported last week (Feb. 29, pg.1 CASA calls for reinforcements as budget crunch approaches), CASA is facing a serious threat to its continued existence when a major grant source dries up at the end of 2012. The Blount Countian asked CASA executive director Sarah Calvert what the agency plans to do in light of the impending crisis.

“There are two options,” she said. “Either we find more money or we close the doors.”

There is the prospect of some assistance from the national CASA organization next year but that’s seen as something of a long shot due to funding difficulties at the national level as well.

“We’ve discussed appealing to the churches in the county for support,” Calvert said. “We’ve been trying to develop a letter to mail out to all the churches asking for a chance to come talk to them and ask for their help. We would ask them to view us as a home mission opportunity. That is one of the things our volunteers value highly – whether there is evidence of a steady religious influence in the home. We haven’t actually gotten that done yet, but that’s an idea we’re working on,”she said.

And though Calvert didn’t mention it, there’s always the county commission and the health care authority.

So far, no request for a CASA volunteer to assign to a child has been turned away, but with 12 active volunteers and 38 children assigned, the current corps of vol- unteers is at or near capacity. The CASA national organization says a ratio of one volunteer per child is ideal, but up to three children per child is manageable. At present, the ratio in Blount County is just over 3 to 1.

What’s required to be a CASA volunteer? The formal requirements are to pass a background check and entry interview, to attend 30 hours of training, to work without pay or even reimbursement for mileage, to work 10 to 12 hours a month on average – longer if needed, to testify in court, and to be sworn in by the judge as a special advocate. Calvert doesn’t say so in so many words, but what her answer to that question amounts to is someone who is both emotionally compassionate and mentally tough. Would she like to appeal outright for volunteers? Yes.

Calvert: “I would say if you love children, if you have deep concern – I would even say a burden –for neglected children, if you wish to make a real difference in their lives, and if you’re tough enough to tolerate the stress that goes with the job, CASA may be just what you’re looking for. It’s a tough job. Not everyone can do it. It’s stressful and an occupational hazard is that you can’t let yourself get too emotionally involved or you can’t function. But you’ll be well trained, and I will tell you, you haven’t lived until one of these kids who has lived through unspeakable things sees you and lights up and comes running up to throw their arms around you. Right now, we could use some younger volunteers, but a lot of younger people are working and can’t be available at the odd hours that are sometimes required. It’s the older, retired people who have the time to do this, and thank goodness for them, but some younger ones would be able to do some things with the kids – like play ball – that the older ones really can’t.”

The Blount Countian will print the final article in this report on CASA next week.