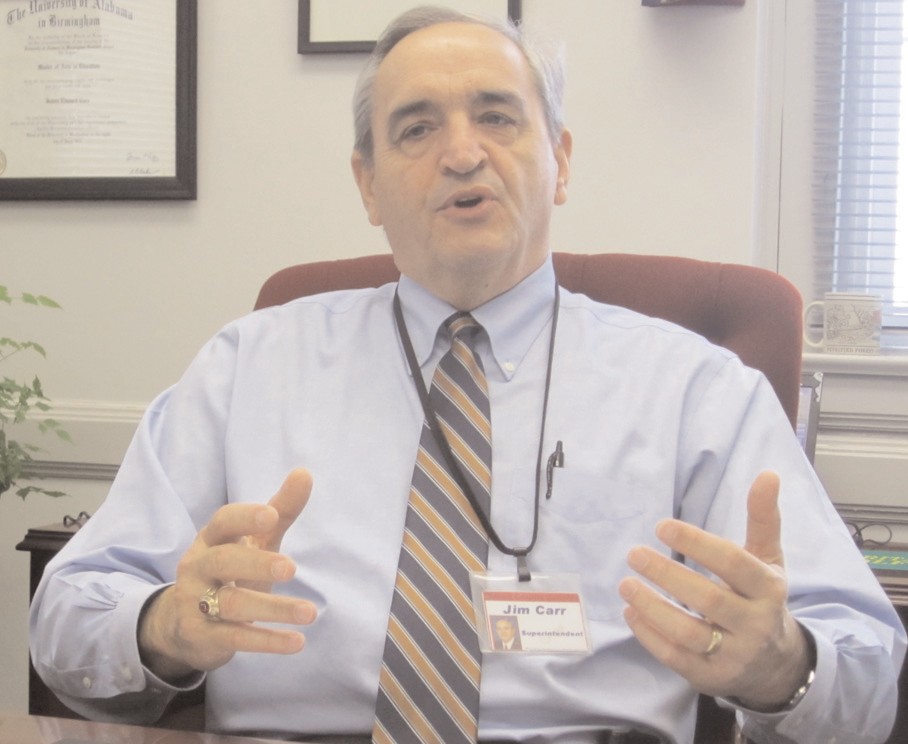 On March 13, James Edward ( Jim) Carr’s name will appear on the Republican primary ballot as the only candidate for the job of Blount County school superintendent. No Democratic candidates have qualified for the job. Carr will run unopposed for the third time in his career as superintendent. To date, he is serving the second of two full terms as superintendent, plus an unexpired term to which he was appointed in 2003.

This article profiles the career of the county school system’s long-serving superintendent, summarizing some of the system’s accomplishments during his tenure and challenges it faces in the coming years. Personal profile: Carr, 61, is the middle son of J.C. Carr, Blount County’s longestserving sheriff from 1963 to 1987 and younger brother of former Blount County civic leader and chamber of commerce president Charles Carr, who died in December 2010.

The younger Carr was born in the Rock Springs community of Blount County, moving to Oneonta at an early age. He graduated from Oneonta High School in 1967 and attended college at Jefferson State and UAB where he was awarded a bachelor’s degree and ultimately the class A. A. degree, a post-master’s degree in advanced studies in education.

He is married to Brenda Waugh Carr, and they have two grown children, Jennifer Dean, 38, and Andy, 32.

Professional background: Carr began work with Blount County school system in 1971 at Locust Fork High School teaching physical education and coaching football. He transferred to Appalachian in 1973, where he taught history, government, and physical education, and coached the basketball team. In 1976, he was promoted to principal at Appalachian, remaining in that position until he was appointed superintendent, to complete Donnie Breaseale’s remaining term in 2003. He has been twice elected to that job since then.

Accomplishments: Carr lists accomplishments in three major areas of school system administration. •improvements in teaching and academic progress, to which he credits the efforts of an professional central office staff, a cadre of outstanding principals, and a group of excellent, committed teachers. •a sound program of infrastructure maintenance and improvements which has touched every educational community in the county during his time in office, including a new, completely renovated middle school at Hayden; a building addition at Blountsville Elementary and a new roof at J.B. Pennington High School; a new addition at Locust Fork High School and a new gym at Locust Fork Elementary – along with renovating the old gym into a multi-purpose cafeteria/auditorium; a new addition and emerging new high school at Southeastern; a classroom addition at Appalachian; a new elementary school and multiple building renovations at Susan Moore; and new gym, renovated lunchroom, additional classrooms and renovated home ec and ag building space at Cleveland. •a program on continuing technology improvements; an example is replacing and updating computers in school computer labs.

Most challenging part of job “The biggest challenge we face is the budget,” Carr said. “That’s true of school systems all over the state. Fortunately, we’ve been able to maintain a two-month operating balance. Blount County is one of the lowerfunded school systems in Alabama (from the standpoint of the annual state allocation). It’s not something we brag about, but it’s something we have to live with. Dealing with finances, and making the adjustments we’ve had to make as a result of loss of revenues from the state – particularly over the last three years – is the most difficult part of this job. “We try to be efficient in all areas, and for the first two of those years, we were able to do that and make adjustments without affecting classrooms. We’ve trimmed staff positions in an attempt to keep those adjustments to a minimum. We’ve been able to handle many personnel reductions by attrition. And yet, over that period of time, we had to cut teaching positions at a time when student enrollment was growing. Because of proration, we actually lost teacher units. It really troubles me when we have to make adjustments that affect the classroom,” he said. “I’m just thankful to have the opportunity to continue serving the people of Blount County as superintendent. We are going through a period of challenging financial times in the schools, like everywhere else, and I think my experience will help us make it through them. Our schools are in good shape, and we’re blessed – I’m blessed – to have great people throughout the system to work with. I want to continue to improve our schools’ academics and to provide the tools teachers need to improve instruction. I always enjoy seeing a project completed, and we’ve got a number of them scheduled in our fiveyear plan. A significant project that will complete in 2015 is the first graduating class at Southestern High School. That’s the first new high school we’ve brought on-line in Blount County since the 1950s. I continue to enjoy every opportunity I have to get involved with students, and I still get excited about going to work every day. I guess that means I’ve chosen the right profession, and as I said, I’m thankful for the opportunity I’ve been given.”