Candidates look back on campaign, forward to runoff 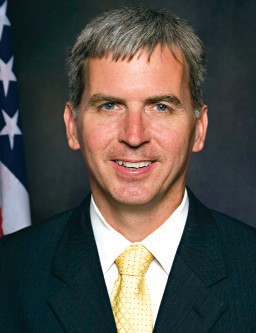 The initial phase of the campaign featured a six-way free-for-all characterized by an air of apparent civility as candidates encountered each other frequently on the campaign trail and treated each other politely in three separate forum venues during the frenetic seven-week period preceding the election to determine runoff candidates. 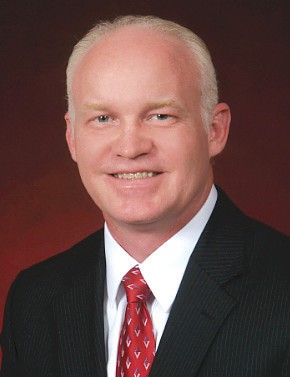 The campaign took a dramatic turn in the final days before the election with a strongly negative direct-mail piece challenging the leadership credentials of former Probate Judge David Standridge, who resigned his office before the end of his term. He nevertheless led the vote total by a comfortable margin, the mailer notwithstanding. Ironically, it can be speculated that the candidate most critically affected by negative voter reaction to the negative mailer may have been Jim Murphree, who missed the runoff by only 25 votes and whose campaign was thought by some voters – in error – to be responsible for the mailing. 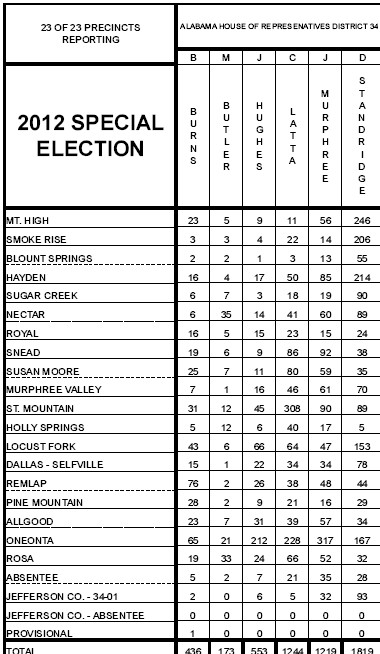 The negative mailer was pro- duced with money contributed by a forestry-related political action committee, via the campaign of Chris Latta. Latta said he was talked into approving the mailer by his advisors, but that the points made were justified, in his opinion. He said he did not intend it as a personal attack on Standridge, but as an illumination of his record, which voters needed to be aware of. The forestry industry, via its trade association has long been in contention with the Blount County Commission, especially District 1 Commissioner Allen Armstrong, over use and abuse of county roads.

The Blount Countian spoke to all six candidates concerning their thoughts about the initial stages of the campaign, as well as the impending runoff. Below, in alphabetical order by candidate, are some of their thoughts.

Bill Burns: “I did the best I could do in the short campaign window we had to work with. I didn’t get the name recognition throughout the district that I needed to win. I think the results were consistent with the money raised, and that will be my priority if I do this again. I haven’t made that decision definitely yet, but I’m leaning that way.” He added it also depends on developments between now and the next election.

Asked his opinion of the negative direct mail piece, Burns replied: “I tried to run my campaign on a positive note. My problem with the mailer is that the responsible party was not identified, so people would know who it was coming from. Some people thought that I did it, but I didn’t. I frankly think it galvanized some of David Standridge’s supporters, who went out to vote as a result, whereas they might not have otherwise.”

Burns declined to indicate who he would support in the runoff, leaving his supporters to make that choice themselves.

Mark Butler: “I have no regrets whatever. I wish it had been a full-fledged campaign instead of the short period we had. I’m glad I ran. It was eye-opening. It’s easier for me now to speak in front of crowds. It also made me study and realize how much I didn’t know about government and policy and so on. I’ve now got about a year to decide whether to run again.”

Butler noted that by the time of the next state representative election, redistricting will result in his being in a different district – District 11, which now includes portions of Blount, Cullman, and Morgan counties.

On which candidate he supports in the runoff, Butler said “If I had to vote today it’d be Chris. I’ve known him a long time. We used to play a lot of golf together.”

As for the mailer, Butler said, “I really think it should have come out earlier. It didn’t give the other candidate time to respond. If I had done it myself, my name would have been on it. It really should have been brought out in the forums.”

Joe Hughes: “I’ve thought back about the whole six-week sprint out of the blocks we had to make, and I don’t think I would change anything I did if I had it to do over. I think my positions were correct and they wouldn’t change. I was continually humbled by people who supported me, both in spirit and in contributions.”

Does he plan to run again in two years? “Let me answer that this way: the day after the election I went around the county collecting my signs. It’s very important to me to clean up Blount County from the election signs. Beyond that, I took’em home and put’em in my garage – in case I need’em again.”

On the negative mailer, Hughes said he had several calls from angry people who thought he was responsible because he took a campaign contribution from a political action committee with a similar name to the one that paid for the mailer. “I thought it was unfortunate the way it was done,” he said. “If the individual who’s responsible for sending that out didn’t have enough control over his contributors to prevent that from going out, how can we trust him in Montgomery? I thought it was cowardly.”

On who he would like his supporters to favor, Hughes declined to name a candidate, leaving them to use their own judgement. On who he personally intends to support in the runoff, he said, “I have been contacted by only one candidate looking for my support. I’ve told him that I’d like to sit down and talk to him about it. I wouldn’t support the guy who tried to take me out, though.”

Hughes added that campaign reporting requirements need to be reformed in order not to constitute such a hardship on some candidates. The weekly report forms are due on Friday, and can’t be received in the Secretary of State’s office before Friday. Neither can they be e-mailed or faxed on Friday. They must be sent by overnight mail to arrive during the day Friday, he said. In some areas of the county, it is difficult to find a Fed-Ex or UPS drop to meet the Friday requirement.

Chris Latta: “I wouldn’t do much different from what we did so far in the campaign. The runoff will be a lot more challenging. Talking about our school board efforts, talking about what’s going on in communities, sitting down and talking to people over a cup of coffee – the personal interaction and relationship building – I really enjoy that.”

How will he differentiate himself from his opponent during the runoff? “I think that will involve our records of leadership. I think I have a much better record – serving on the school board and being involved in the community.” Specifics: (1) “For eight straight years during tough economic times, the Blount County School System has weathered the challenges well, maintaining a two-month operating reserve, which some school systems no longer do. (2) “Leadership of KARE (Kids’ Athletics in a Rural Environment) an organization on Straight Mountain that had the vision of building a recreation park for young people, and carried it out.” (3) “Leadership in the banking industry – 20 years of strong decision-making.”

On the negative mailer: “It’s a public record that the forestry industry produced it, and they’re supporting me. We don’t need to get into specifics. I don’t need to be speaking for them. Ask them about that. The points that were made were justified. It represented conversations that all of us as candidates had with voters during the campaign.” Latta declined to go into further details on the record.

How does he see the tone of the runoff in the remaining weeks? “I think we’ll talk mainly about our records and qualifications and issues that face Blount County. The challenge in the runoff is going to be turnout. People are tired of politics and in December are going to be thinking about everything but politics. I just intend to engage with people in the community and work as hard as I can.” He added that the campaign will continue to be a valuable educational experience for his three young daughters, who have

Jim Murphree: “Overall it was a great campaign and it was a very rewarding experience. I met a lot of great people, including, of course, my supporters themselves.”

Will he consider running again in two years? “I have alluded many times to the fact that I’m passionate about this process. I don’t have any set plans, but I wouldn’t rule it out.”

On the negative mailer: “I saw it. I didn’t have anything to do with it. I would say it most likely did affect the outcome of the election. People have mixed feelings about that kind of thing. I definitely think it should have been identified.”

David Standridge: “Obviously, I feel honored to have gotten the most votes to qualify for the runoff. I appreciate all the support I received. I feel good about my race, although I was disappointed by some of the negative stuff at the end. People in Blount County don’t like negative campaigns. I do think it affected the race. I had quite a few calls at home from people District 34 election vote totals by precinct who thought various other people were responsible. It took people a few days to figure out where it came from. But he has spoken to me, and I’m ready to move on. I hope he will too.”

On what to expect during the remainder of the campaign and how he will differentiate himself from his opponent: “I want to run a campaign based on my qualifications – and let the people decide. I feel like I’ve got a lot of experience – on the school board, in law enforcement, and in county administration – in addition to the statewide connections I’ve made in those jobs. My focus will be on me and my preparedness for the job, not on my opponent.”

Standridge said he thought more light should be shown on circumstances behind the negative mailer, including out-of-county influences behind its development, as an issue in Blount County’s control over its own affairs. Some of those influences were confirmed by the newspaper. Others were not indicated and are not covered here.

“I would appreciate voters’ consideration as we go forward. I hope voters will concentrate on the candidates’ qualifications and experience as we do so.”