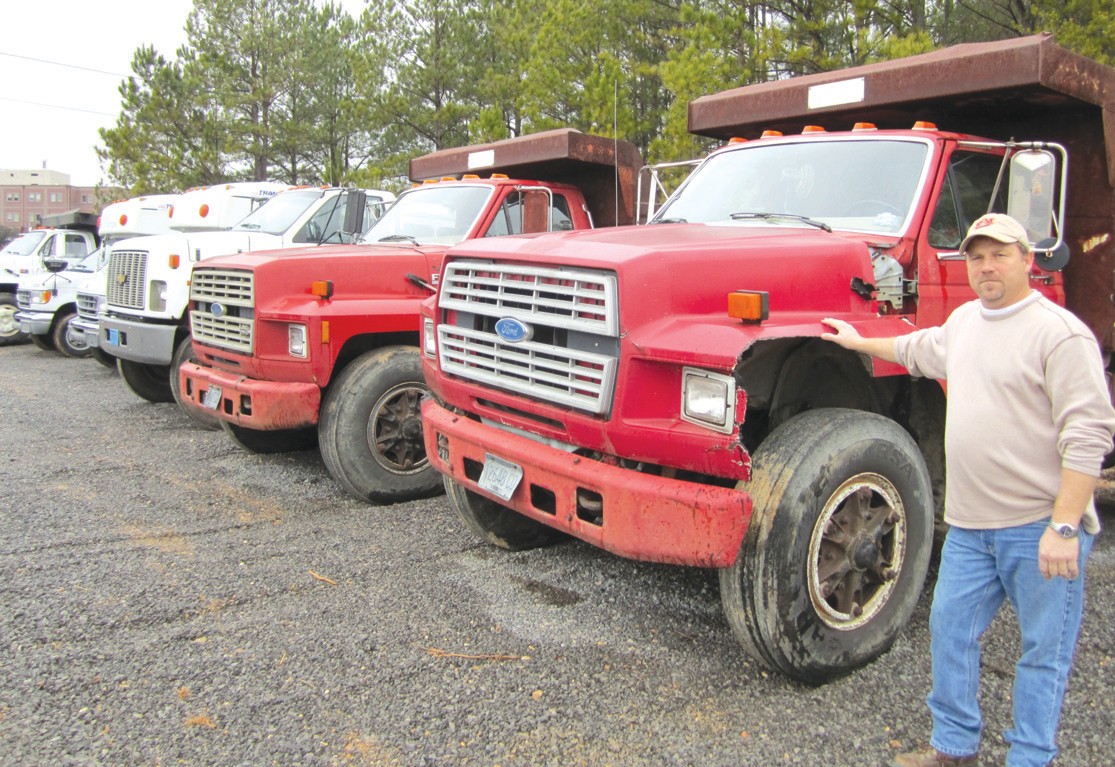 District 3 Commissioner Dean Calvert indicates several of the 29 county vehicles and other pieces of work equipment that he has been instrumental in declaring surplus. They will be sold at auction or for scrap, whichever brings the most money to the county. “If equipment isn’t working or isn’t being used, it shouldn’t still be carried on the inventory where it’s costing the county money,” he said.

District 3 Commissioner Dean Calvert announced his repaving program for 2011 will include necessary patching and sealing on three important farm-to-market arteries, along with reclaiming and tar-and-gravel repaving of five county residential roads. Patching/sealing

County road 27, 9.25 miles from its intersection with county road 29 at Highland Quik Stop to the St. Clair county line en route to Springville.

County road 36, 2.99 miles from its intersection with Ala 75 just north of Horton Mill Covered Bridge to the District 3 boundary at Tugalo Road.

Calvert said these roads will be patched and sealed as necessary where the pavement is badly cracked and deteriorated, rather than being treated continuously over their entire length. Sealing refers to applying a thin layer of asphalt over pavement that is seriously cracked and subject to breaking up. The liquid asphalt fills the cracks and crevices and slows the rate of pavement breakup and deterioration caused by traffic volume and weather conditions.

“We can’t afford to completely resurface these roads. Any one of them would take more money than we’ve got in the whole annual budget for District 3. We’ve got to preserve them as best as we can to keep them from breaking up for as long as possible. That’s what we’ll be doing this year,” he said. Tar-and-gravel repaving

Calvert said the following roads are scheduled for tarand gravel reapplictions. In addition to paving these roads, he said reflectors will be installed on six miles of county road 24, where frequent foggy conditions make them needed for driving safety.

Work on tar and gravel roads to prepare them for repaving will begin this spring, with the actual repaving work scheduled for late June to early July.

Calvert said his efforts to improve roads for residents in the district are hampered by the amount of debt it is saddled with. Total debt for equipment still being paid for is $215,258. Of that amount, $80,806 must be paid out of District 3’s 2011 budget. That would translate to three to four more miles of road he could resurface with tar and gravel if he didn’t have to make those debt payments, he said.

“Counting the $75,000 of District 3’s budget that had already been spent when I took office, that’s like starting off $155,000 in the hole for this year, compared to what I could have had to work with,” he said. Other District 3 projects

Cleaning up the District 3 work center. Calvert and his crew have conducted a major site cleaning and clearing at the work center, pulling down two sheds that were dangerously deteriorated and collecting unused, nonworking, and obsolete equipment from the severalacre site and consolidating it in one place for disposal.

Also consolidated was all the scrap metal from the site into a massive pile that will be sold with the proceeds going toward materials to be used to build a new pole barn to accommodate large equipment such as the reclaiming machine. Construction on the new barn has begun and will proceed as funds from sale of scrap allow.

“I think it’s important to have this place looking clean. It helps me and helps the men to have a proper mind set in how we deal with the public. We’re organized; we know what we’re doing,” he said.

•Developing a positive mind set. Calvert said he is trying to help his work crew develop a customer-centered mind set toward citizens the crew serves. “They’re our bosses. They’re the ones who pay us. We need to treat them accordingly,” Calvert said. He said he is trying to encourage the mindset by posting thank you calls from the public and calling them to workers’ attention, thereby encouraging them to serve people well enough to trigger such responses. “These guys are really hard workers, and they don’t get much recognition for it. They deserve more than they get, and these calls are one way of letting them know people appreciate them,” he said. Countywide concerns

The budget crunch. Like fellow Commissioner Waymon Pitts, Calvert warns of growing budget pressures, particularly resulting from tax revenue decreases and their likely impact next year. “We’re going to have to make some hard decisions. That means doing without things. People won’t like that.”

Oneonta Utilities water meter connection fees. “The Oneonta Utilities meter fee to get water connected is $3150. People around here don’t have that kind of money. I cannot understand why it would cost $3150 to connect to a water line. It doesn’t cost that much at these other water systems. That’s hurting us. I’ve had several mention this to me, including one just recently. As commissioner, people call me for help when they run into things like that. I may be able to help them, or I may not, but I am going to start raising some of these kind of questions when I think they need to be raised. $3150. That’s what it is. Cash.”