Calvert admits it was him 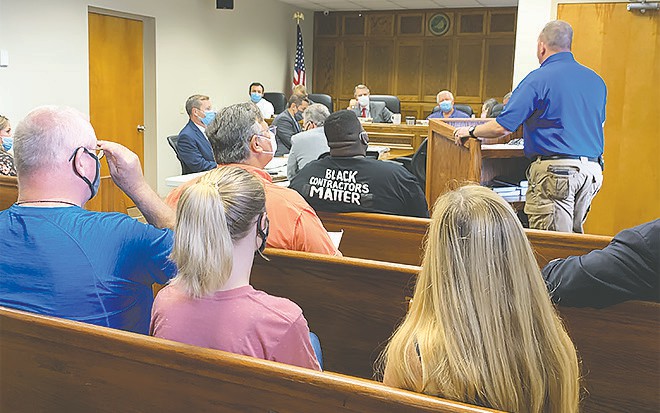 Dean Calvert, District 3 Blount County commissioner, admitted during Monday’s commission meeting that he is the person in a recording speaking with a Warrior police officer and said to the officer, “Them is just throwing them together,” referring to homes being built in Oneonta by an African-American contractor. The recorded conversation is also awash with multiple sexists and misogynistic remarks, as well as sexual references.

Calvert first acknowledged accountability in responding to a question from Blount County Sheriff Mark Moon (pictured above at the podium), who asked Calvert if he took responsibility for the remarks. Calvert said, “Absolutely, I already have.” There is no record that Calvert had previously publicly acknowledged he is the person in the recording. A Facebook post he made, which can be viewed on the Alabama Political Reporters’ website at www.alreporter.com/2020/09/04/county-commission-association-president-elect-apologizes-for-racial-slur/, was vague on the issue, and Calvert refused to respond to The Blount Countian last week when asked about his role in the recording. He had previously told TBC he did not know if it was him in the recording.

Moon was followed at the podium by Clarence Muhammad, a self-described community organizer in Birmingham. Muhammad, who was accompanied by several people that probate judge and county commission chairman Chris Green termed a delegation, said he was a member of several organizations including Birmingham’s Community Affairs Committee.

That organization, Muhammad said, works for inclusion and diversity, as well as to fight racism. Muhammad told the commission Calvert’s words may have been a mistake and acknowledged Calvert had stepped down as president-elect of the Association of County Commissions of Alabama, but that action “was not enough.”

Muhammad spoke directly to Calvert and said, “You need to step down from this position (county commissioner). Just step out of the way so Blount County can grow.” He added that he, and inferred others, would continue to attend the commission meetings until Calvert did so.

Calvert responded by saying, “Mr. Clarence, the words that was spoken was, the remarks was very insensitive. I’m very sorry I said them [sic].” He did not react to the call to resign, but did imply that he and his family have become the victims in some way in this incident, saying his family has been threatened, but did not elaborate.

Still in jeopardy because of this controversy is the extra jobs for Blount County deputies who perform security services at Inland Lake, a major reservoir of the Birmingham Water Works Board. Directors of the BWWB met Sept. 9, and the remarks by Calvert were part of the agenda. Even though the board was cautioned by one of its attorneys to limit the public discussion because it could involve the “good name and character” of an individual, board chairman Ronald Mims said he wanted some opinions expressed in public. For his part, Mims said, “Some of the things said about [the black contractor] were just awful.”

Staff of the BWWB told the directors there is not a formal agreement with the BCSO and each deputy was essentially a 1099 private contractor. In 2019, the Board paid out $551,000 for security services at Inland Lake, and thus far this year, the cost has amounted to about $375,000. The Board was also told that since there is no contract, they can end the arrangement at any time. Mims said that if they choose to terminate the use of BCSO deputies, they could use the Board’s current security company initially until they find a suitable replacement.

Board director William Muhammad (no relation to Clarence Muhammad) talked about “the elephant in the room.” He said, “It was the county commissioner in Blount County that made some racist statements about a Blount County resident, a black contractor.”

Board director Dr. Brenda Dickerson said, “I think we need to look at it from a cost stand point.” She and other Board members asked for more information in order to make a decision about ongoing security at Inland Lake.

The Board meets again on Wednesday, Sept. 23.

The complete dash cam recording can be found on YouTube at www.youtube.com/watch?v=9AzP7SIBM40. Please use discretion because the language is graphic and profane.