Busy in the Bay 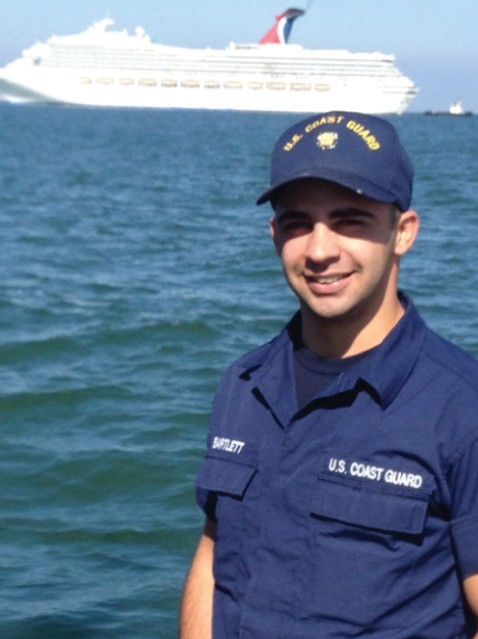 Cody Bartlett says he is a homebody and misses his hometown of Hayden every day. But as a Mobilebased member of the United States Coast Guard, he hasn’t had much time to return home. Instead, he has remained busy with national newsbreaking events this year.

After graduating from Hayden High School in 2010, Bartlett began college. Then, he got a job working at Lowe’s in Cullman. A seemingly normal thing for a post-high school grad to do. However, one person he met while working changed his life.

A co-worker, who had just come off active duty with the Coast Guard, told Bartlett about the opportunities he could have if he joined.

Bartlett said the combination of traveling the world, serving his country, and having numerous opportunities open up to him, was convincing enough for him to decide to take his co-worker’s advice.

Now, the 21-year-old, resides in Mobile and works with a 12-men crew on an 87-foot cutter. And, for him to be in the Coast Guard for only a little over a year, Bartlett has experienced, firsthand, his fair share of national news.

Remember the Carnival Triumph, or as many called it, the “nightmare” cruise?

In February, 3000 passengers along with 1000 crew members were stranded in the Gulf of Mexico after an engine-room fire left the ship without power or propulsion and passengers and crew with no working toilets and a short supply of food.

While the cruise ship was slowly – 3.6 mph slow, according to Bartlett – making her way back to shore, Bartlett and his fellow crew were a mile away from the ship in case of an emergency. For 19 long hours, they followed the Carnival Triumph while a tug boat pulled it to back to land.

Then, once the cruise ship was safely back in one of Mobile’s shipyards, it broke loose, and once again, had to be retrieved.

If that wasn’t enough national news participation for Bartlett, one night back in April, he was the only crew member on his cutter when two fuel barges exploded on the Mobile River. The explosion left three people with critical burns.

Bartlett says he was only a mile away from the explosion but heard nothing. Once he realized what had happened, he called the rest of his crew and they went up the river to stop incoming traffic. Bartlett and his crew remained there for 9 to 12 hours.

Still, Bartlett says he enjoys the work he is doing.

“It’s a chance to serve my country, and the community really appreciates what you’re doing. People want to shake your hand,” he said. “I attend Spring Hill Baptist Church here, and when people found out about me being in the Coast Guard, they were coming up to me to talk about it. That’s really rewarding.”

Luckily, escorting “nightmare” cruises back to shore or diverting traffic from an exploding fuel barge, isn’t a normal day with the Coast Guard. Bartlett says most of the time he and his crew patrol the waters from Pascagoula to Pensacola looking for fisheries and small boats to inspect. However, they continue to remain on high alert in case of emergencies.

“We have to be ready to be recalled if something happens,” said Bartlett.

During his four years with the Coast Guard, the small-town guy from Hayden does get chances to make the four-hour drive back up to Blount County. He gets vacation days and takes advantage of long weekends.

But, for now, Bartlett says he loves the opportunities he has been given.

“I want to travel and see the world for a while,” he said.

With all the adventure Bartlett has been a part of while in Mobile, he says his future may not be so erratic. In 10 years, he says he sees himself as a high school history or math teacher.

Bartlett is the son of Benny Bartlett Jr. and Angie Bartlett. He has two sisters, Jessica and Micah.