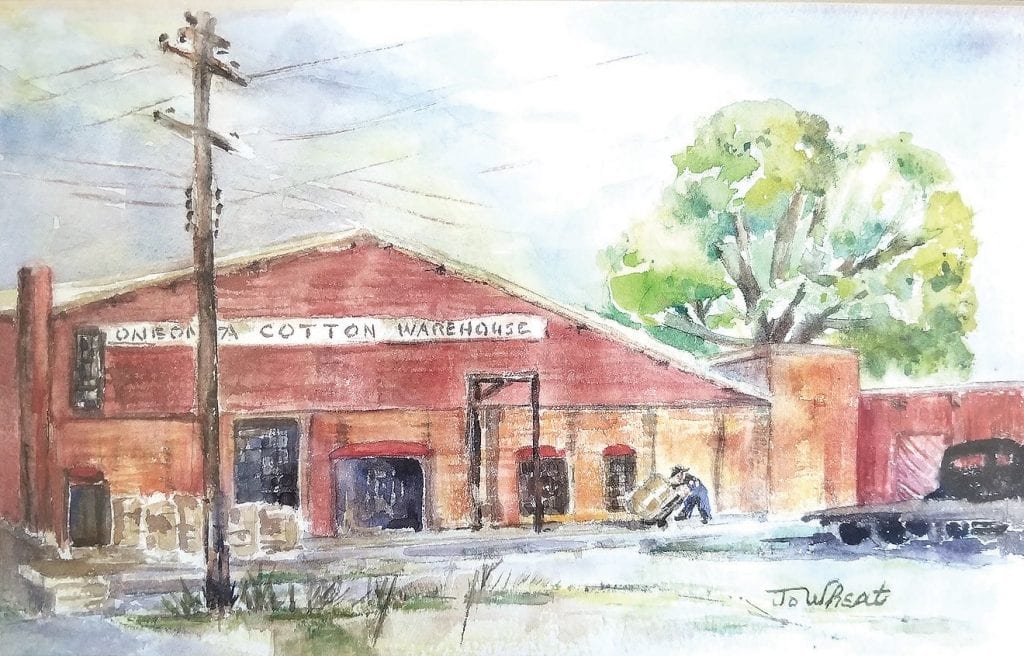 Continuing the 1955 remembrances of Main Street (actually, First Avenue), this series reaches the four and five hundred blocks. The last segment ended at E.H. Horton’s gin on Fourth Street South. Across the street from the gin lay J.P. “Pass” (John Pastal) King and Sons, Inc., listed in his obituary as a commercial egg production packing company.

The obituary details that King served reportedly as the first Republican probate judge and local county commission chair since Reconstruction. His son Royce would later hold the same office, having won election in 2000.

Some of the business advertisements indicate feed and seed may also have been available there. Sources place the establishment at the later Tom Malone NAPA Auto Parts building which lay behind and across the street from the city’s present downtown restrooms on that eastern end. 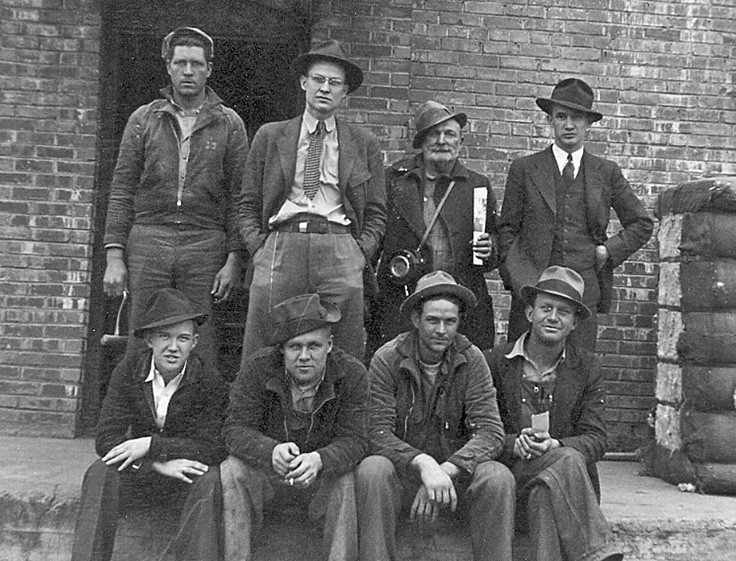 On First Avenue, at 400, the 1955 telephone directory lists Broadway Motors. Most of the sources consulted had trouble recalling that business. Verlon Tipton, however, offered some information. 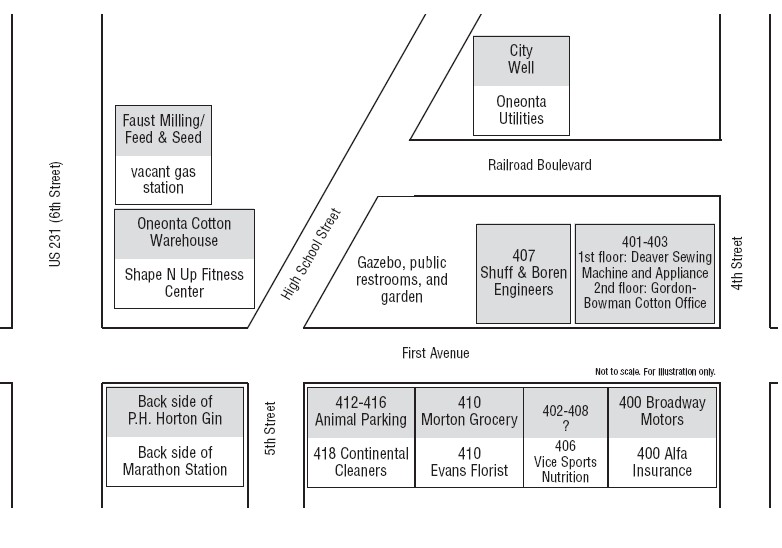 Tipton reports Jess Dixon owned that used car lot. Without much additional detail, Tipton recalls Dixon came to Oneonta from Gadsden through the encouragement of Max Bynum. In addition to the used cars offered, Dixon could also obtain new vehicles at customer requests. The town and county offered many automobile services at the time with Oneonta’s Garner Motors, Hayward Motors, McCay Motors, Moore Motors, and Oneonta Motors; Cleveland had a Mercury dealership and Blountsville had King Chrysler Plymouth.

The Broadway location had a transportation background, previously having hosted a mule barn. Accounts have varied on that, with some crediting Street Lowery as the owner, others questioning that, and with Tipton pronouncing D.C. Paris as the owner.

Tipton contends Street Lowery’s Mule Barn lay across from his present Tip’s Cabinet Shop on Railroad Avenue. He also says that A.A. (Arthur Allgood) Tidwell operated a basket factory there in a two-story wooden building at some point prior to relocating it to a Second Avenue West site.

R.A. (Robert Arlington, Sr.) Gordon along with Charles Bowman operated the Gordon-Bowman Cotton Office above 401-403 on First Avenue. The two had come to work for the Cotton Producers Association (CPA), which originated in Carroll County, Ga.

By the 1950s, CPA had a Tucson, Ariz., location, where Gordon, a severe asthmatic, would spend portions of the year. His son Bob (Robert Arlington Gordon, Jr.), reports that his dad and Bowman would normally alternate between those two sites. Approaching school age in Arizona, Bob believes his parents asked him where he would like to attend school, and he says he told them he thought he wanted to go “home.”

His dad would continue with the Oneonta business until somewhere in the early 1970s when, according to Bob, “the cotton business had just about run its course.” Bob believes Bowman went into insurance and later plot sales for Elmwood Cemetery in Birmingham.

One additional note of the business, several have commented that the partners maintained a stock ticker. Various local businessmen would visit the ticker room, the only such in town, to check on commodities and stock prices. Bob, in fact, says that he later assumed that then empty room to begin his first dental prosthetics laboratory.

With the railroad spur close behind, the buildings on the odd side of the 400 block ran farther east and west than their north-south width. Some say that likely most of those businesses lay on land leased from the railroad, which seldom appeared ready to sell its holdings.

On the ground floor, below Gordon-Bowman lay Deaver Sewing Machine and Appliance. Few contacted recall the business. Advertisements in The Southern Democrat for 1955, place its location at the corner of Fourth Street and First Avenue. Those notices also proclaim the business carried Pfaff Sewing Machines as seen on NBC’s the “Today,” “Home” and “Tonight” shows.

Tipton reports T. B. (Thomas Benton) Deaver had at one time traveled to Texas and encountered some trouble with the law there. Later in Oneonta, a man spoke with Deaver about the Texas events and asked if he were related to that Deaver. According to Tipton, Deaver ignored the question.

The telephone directory lists Shuff and Boren Engineers at 407. Fitzhugh “Hugh” Shuff and Russell Boren apparently had their office at the location in 1955. That year had significance for the two as they saw the completion of the dam at Highland Lake.

The article reads, in part, “Hugh Shuff who conceived this idea for the dam and lake, began work on this project about a year ago. Though he has supervised the construction he stated, ‘The successful execution of my plans has been largely through the excellent, co-operative work of Russell Boren who assisted with the engineering; Pee-Wee Burgess of Birmingham, who did the drilling; Marvin Owen, who was in charge of construction; Virgil Phillips, chief blaster; and others who have assisted me.’

“The lake possibly the highest in elevation for its size in the southeast, is ready now to be filled with the coming winter rains. Its anticipated water supply will be sufficient to irrigate 7000 acres of the surrounding vegetable farms.

“The artificial lake and its fourteen miles of shoreline will furnish a large recreation area. The southeast shore will be a beach area of natural sand ideal for picnickers and swimmers. Concessions for water sports and fishing will be announced later.

“The completion of this project sees the creation of another Blount County enterprise by Blount County people. Of special interest has been the use of a locally manufactured drill and locally-manufactured blasting explosives.”

Asked of those locally-manufactured blasting explosives, Tipton says explosive supplies lay stored on land behind the present Charlie B’s Restaurant at the site of the ARC center. He notes an Allgood site held still more. That site would offer one of the most memorable stories in Oneonta a few years later when would-be thieves set off explosives which blasted almost all the downtown windows and surprised some burglars at then Miller Drug Store. Ramon Lowry believes the Hercules company operated the explosives enterprise.

Across from the engineering firm lay Morton Grocery at 410. Tipton reports brothers Homer and Wallace opened the store at that location. He asserts a Mr. Bynum built the building and offered the brothers that structure upon extended payment.

Tipton says Homer had worked for TCI (Tennessee Coal and Iron in Jefferson County) before coming to Oneonta around the beginning of World War II. Based on the Tipton account, Homer bought Boyd’s Rock Store building on Second Avenue and remained there several years before selling to Joe Tidwell.

That transpired before his move to First Avenue and Tal Cornelius’s later purchase of that building for his grocery. Following the sale, Homer moved to his corner store at U. S. 231 and county road 29.

Past Morton’s grocery lay an area frequently used by some for wagon parking. Ruth Kimbrell Walker, aunt to Bob Gordon, disagrees over that use saying she had a garden in at least part of the area, near her family’s home in the 400 block of Second Avenue. Some have said the city designated the area for wagon parking to prevent animal waste over many of the city’s streets.

Any needing a radiator repaired headed to Joe Cornelius’s welding and repair shop which sat across from the parking area, according to Tipton and frequent source Leto Curl. Lowry describes the building as a relatively small concrete-block structure with openings at its east and west ends. He says the building sat a little past the vehicle entrance to the present city utilities board office. So far, research has not revealed dates of operation for that shop.

Lowry, who headed the city’s utilities department for some time, agrees with Charlie Hendrix that the city’s first water source lay at the now-capped well beside the department’s present headquarters by High School Street. Around 1947, the city would drill the still-used well on Jefferson Avenue and later find still other resources.

Lowry and his family lived in the rock house by the well. A front room of the house served as the utility board headquarters in its early days. He reports the city bought the water facility from a firm he recalls as Alabama Water Services, which operated in several state communities.

The Oneonta Cotton Warehouse consumed all the lower 500 block, although it too faced High School Street. Some details on it and the Faust Milling and Faust Feed and Seed it partly encased appear in an accompanying article. Opposite the warehouse’s First Avenue side lay the back of P. H. Horton’s gin, which faced Second Avenue.

The accompanying information that addressed the 1955 fire at Faust did not give any significant background for the business. The business had other locations before its final U.S. 231 site. That site, by most accounts, lay near the presently vacant former service station south of the back of Shape N Up Fitness Center.

A clipping found at the Blount County Memorial Museum has a photograph of the Faust building from an undated Southern Democrat article referring to businesses which had opened in Oneonta within the last two years. The article says Faust opened in September 1948.

The March 3, 1955, Southern Democrat reports, “Faust Feed and Seed Store began last week the moving of their business to . . . Highway 231 at the corner of 1st Avenue East.” By the time of the almost five weeks later fire, the article dealing with that refers to the business as “Faust Milling Company and Faust Feed & Seed Store.”

The article identifies William Dean Faust and Johnny Faust as operators and as having leased the mill from Jimmie Tidmore. It reports Tidmore had previously run the business there as Oneonta Milling Company. The article credits William Dean as saying, they “will [now] devote their time to the operations of Faust Hatchery and Faust Poultry Farm.”

A September 29, 1955, Southern Democrat article adds still another wrinkle with its “New Seed, Feed Store To Open” headline. That report reads in part, “A. E. (Ed) Davis announced” he is opening the new store, known as Oneonta Seed and Feed Company in the former Faust Feed and Seed Store at 607 First Avenue, East.