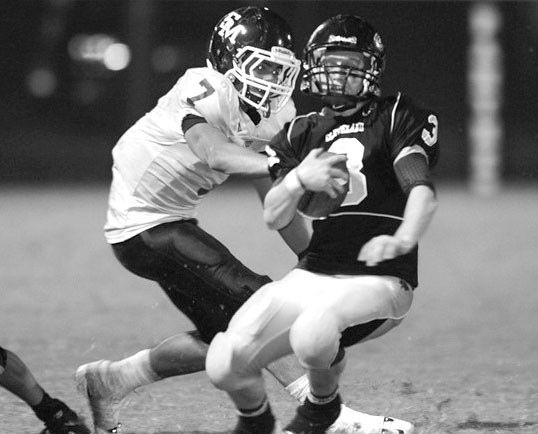 Cleveland’s Trevor Yates tries to get away from Susan Moore’s Sergio Olguin.

The Susan Moore Bulldogs bounced back from an early 7-0 deficit to post a 35-21 victory at Cleveland last Friday night. The Bulldogs improved to 2-0 overall, 1-0 in 3A Region 5, while Cleveland dropped to 1-1 overall, 0-1 in the region.

Susan Moore led 21-13 at the half but Cleveland answered early in the third quarter on a 20-yard touchdown run by Trevor Yates. After Yates added the 2-point conversion run, the game was tied 21-21.

The Bulldogs regained the lead on the following possession when Sergio Olguin scored on a 3-yard run and the extra point by Jesse Reeves put the visitors up 28-21 with 6:15 left in the third quarter.

Neither team did much again until Preston Kent iced the game for Susan Moore with a 13-yard run with just 4:44 to play.

Yates gave the Panthers an early lead with a 4-yard run in the first quarter but Susan Moore countered early in the second quarter when Olguin broke loose for a 49-yard touchdown run.

The Bulldogs extended the lead to 21-13 just before the half when Brown hit Matt Jones with a 17-yard touchdown pass.

The teams piled up plenty of yards – 461 by Susan Moore and 314 for Cleveland.

Cleveland had two players go over 100 yards on the ground. Yates had 138 yards and a pair of touchdowns on 17 carries while Scotty Caffee added 108 yards on 19 attempts.

Kent had a huge game for Susan Moore with 215 yards and a touchdown on 23 carries. Olguin added 128 yards and a pair of touchdowns on just 10 attempts.

Collum completed 4 of 13 passes for 52 yards and an interception.

Brown completed 8 of 15 for 102 yards with one touchdown and one interception for Susan Moore.

Kyle Blackwood led the Panther defense with eight tackles while Micah Collum and Patrick Johnson each had six. Emanuel Terry had a fumble recovery.

Susan Moore got a game-high nine tackles from Olguin while Dylan Bishop added eight. Matt Jones added a fumble recovery for the Bulldogs.