Bulldogs named to 1A soccer All State team 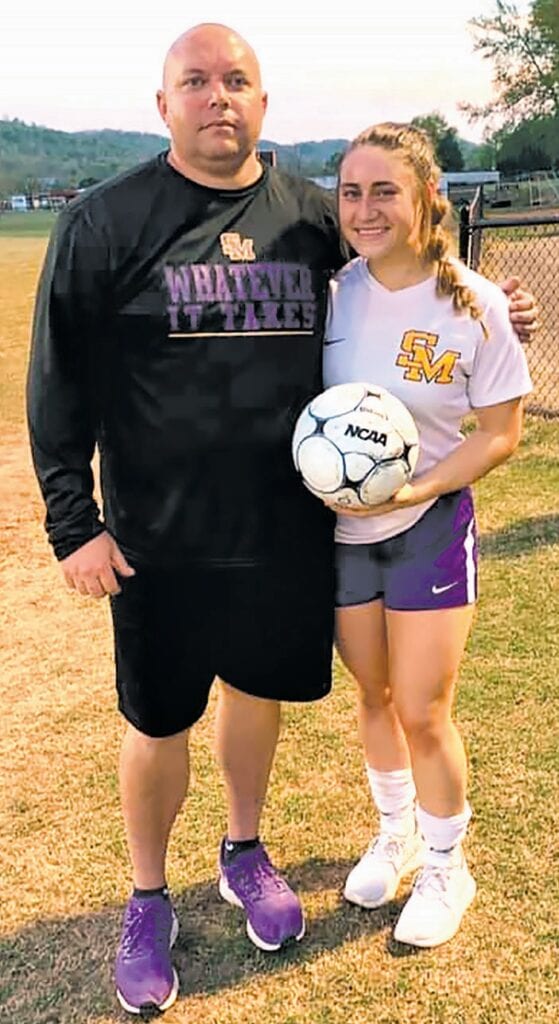 Claire Perkins is pictured with coach Nick Butts and the game ball with which she broke the AHSAA single season goal record. -photo courtesy of Nick Butts

The Susan Moore Lady Bulldogs finished with a 24-2 record on the season and won the soccer program’s first region championship in school history. The Bulldogs captured the first No.-1 ranking in school history and scored an all-time record of 149 goals while allowing only 19 goals on the year. The 149 goals is the most scored by any team in all classifications from 1A-7A schools in the AHSAA.

The Lady Bulldogs also made history shattering AHSAA records along the way. Claire Perkins scored 92 goals on the year breaking the AHSAA record and also broke another AHSAA record with 12 Hat Tricks (three goals in 12 consecutive games) for the season. Perkins also led the nation (all 50 states) with the most goals scored in a single season.

Kristy Cervantes broke the AHSAA assists record with 44 assists. She also scored 26 goals. Claribel Robles reeled off 39 assists on the season, which ranks third in the AHSAA record books. She finished with 16 goals.

Perkins, with her aggressive style of play and scoring ability, caught the attention of coaches throughout the state which garnered her a spot on the AHSAA North All Star roster. She will play in the North vs. South All Star game in Montgomery July 21. Perkins is also in the running for the Girls Gatorade Player of the Year award, which will be announced June 21.

Perkins was also named to the Super All State Team, which includes top players in all classifications. Named to 1st Team All State for 3A were Cervantes, Perkins, Samantha Zavala, and Audrey Lauderdale. Robles and Maricarmen Gonzalez received honorable mention recognition.

“This season has been one for the record books for sure,” head coach Nick Butts said. “This team has built a foundation for our program here at

Susan Moore and next season looks very promising since we have everyone coming back. I believe in this team and I have no doubt that we can make a run at a championship next season.”