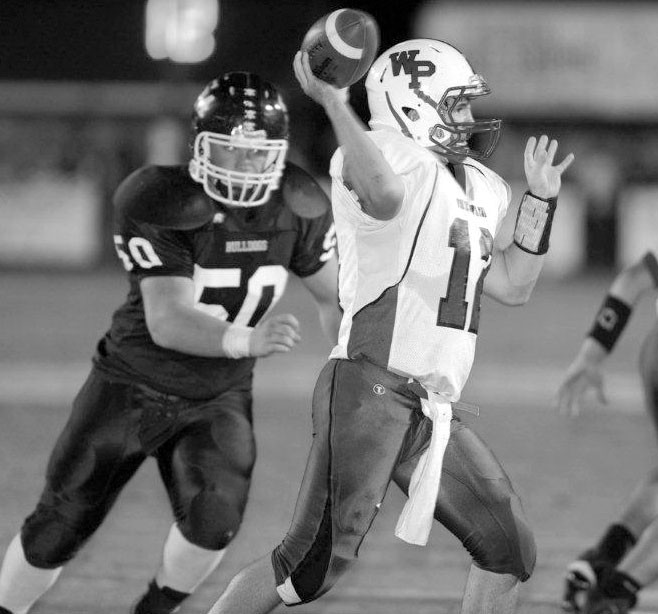 The Susan Moore Bulldogs led 10-6 after the first half and then held off pesky White Plains down the stretch for a 16-12 victory at home last Friday night.

The Bulldogs appeared to be in trouble on the next drive when Justin Hawkins’s punt was blocked but the Bulldog defense stuffed the White Plains running game and Freddy Hernandez intercepted a Wildcat pass.

Two possessions later, the Bulldog offense finally got on the board. Hawkins capped the 69-yard drive with a 5-yard run and Nestor Hinojosa’s kick put the home team up 7-6.

On the next possession, the Bulldogs moved into field-goal range and Hinojosa boomed a 31-yarder to give the home team a 10-6 lead at the break.

The Bulldogs were in position to take command two possessions into the second half when disaster struck.

White Plains defensive back Dylan Randall stepped in front of a Hawkins pass and streaked 95 yards on the return. The try for two failed but the visiting Wildcats led 12-10 midway through the third quarter.

The Bulldogs turned the ball over on downs at the Wildcat 23 early in the final quarter but the defense got the ball back on a three-and-out.

From their own 39, the Bulldog offense needed just one play to find the end zone. Hawkins found Cody Sanders behind the Wildcat secondary and the senior streaked 61 yards with what turned out to be the winning points. The try for two failed but the Bulldogs led 16-12.

With 5:39 to play, White Plains got the ball at their own 25 and went to work. Using a double-wing set on every snap, the Wildcats moved the ball into Susan Moore territory.

The Susan Moore defense grudgingly gave up yardage until White Plains reached the Susan Moore 29. From there, a pair of Wildcat passes fell incomplete and the Bulldog offense took over and ran the final 1:12 off the clock.

Hawkins had a good night with 103 yards and a touchdown on 15 carries. He completed 14 of 25 passes for 201 yards with a touchdown and an interception.