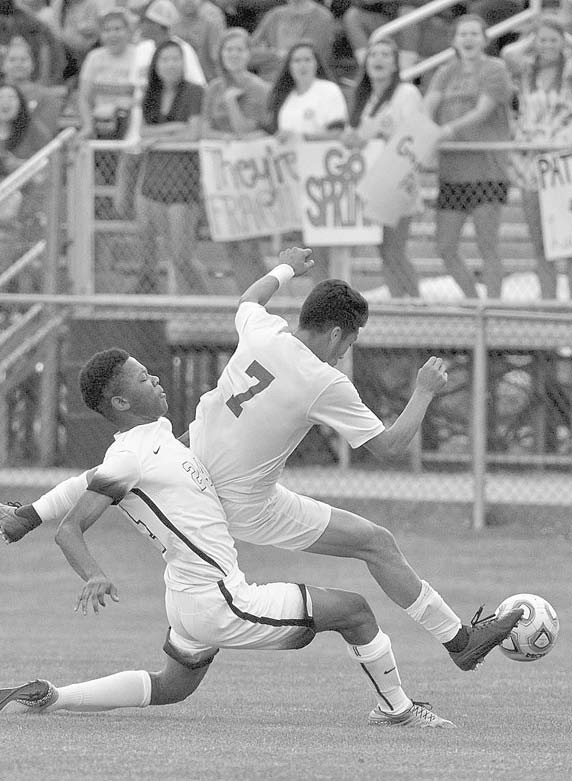 Susan Moore’s Angel Duarte is brought down by an Indian Springs defender.

One of the most impressive – and unexpected – runs in Alabama high school soccer history came to an end last Friday as Susan Moore fell 2-1 to Indian Springs in the 1A/3A boys final at John Hunt Park in Huntsville.

Under new head coach Bob Austin, the Bulldogs put together the best season in school history at 20-4-1 and became the first team in Blount County history to play for a state title in soccer.

In the playoffs, Susan Moore knocked off No. 3 Collinsville (3-2) on the road and then took care of Tanner (3-2) at home to advance to the semifinals in Huntsville.

In last Wednesday’s semifinals, the Bulldogs found themselves matched up with No. 6 Altamont once again and this time it wasn’t even close.

Susan Moore jumped out to a 4-0 lead and Altamont never was in the game after the first few minutes of the half.

Angel Duarte scored two goals and added an assist and Jason Mejia had a goal and an assist in the 4-1 victory. Mauricio Castro also had a goal as Susan Moore outshot Altamont 18 to 6.

In the championship game, the Bulldogs faced No. 1 Indian Springs, which had beaten Bayside Academy (3- 1) in the other semifinal.

Indian Springs controlled possession for the first 10 minutes of the game but the Bulldogs gradually began to loosen up the Indian Springs defense.

Indian Springs head coach Rik Tozzi had started the game in a 4-4-2 formation with one of the midfielders shadowing Duarte – basically double-teaming Susan Moore’s most dangerous striker with the next nearest defender.

That strategy worked for the most part as it kept Duarte from making runs off the ball and forced him to give up possession early.

However, the Bulldogs made an adjustment on the fly and it paid off when Mejia pounced on a through ball and banged it past the Indian Springs keeper at the 37-minute mark of the first half.

The Bulldogs bunkered in on defense for the rest of the first half, conceding possession but running out the clock and took the 1-0 lead to the half.

At halftime, Tozzi switched from the 4- 4-2 to a 3-5-2 to try to establish control of the midfield and stretch the Susan Moore defense horizontally.

Just five minutes into the second half, the switch paid off as Justin Chapman pounced on a rebound off the crossbar and tied the game 1-1 with a low shot into the corner past the Bulldog keeper.

Susan Moore immediately pushed to regain the lead but the Indian Springs defense headed away one cross and then cleared a dangerous ball in front of the net to stop another scoring opportunity.

What turned out to be the game-winner came at the 67-minute mark when Donald Wilson somehow put a shot through a tightly-packed Bulldog defense and over the keeper into the net from 12 yards out.

Trailing 2-1, the Bulldogs made several runs at the Indian Springs defense over the final 20 minutes but couldn’t come up with the tying goal.

It was Susan Moore’s first trip to the state tournament while it was the third title and 10th trip in 15 seasons under Tozzi.

“I tell you what, we didn’t play very well,” he said, “but that’s because of them. That is a very athletic team and they played very good soccer.

“I’m proud for our kids and I thought we played well,” said Austin.