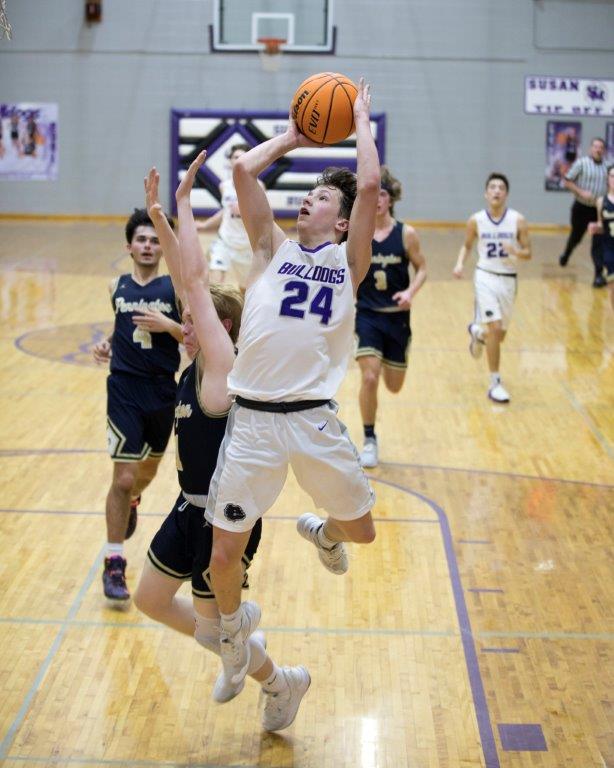 Susan Moore’s Logan Blackwell scores against J.B. Pennington. They beat the Tigers sending them to the Area Championship for the first time since 2005.-Sherry Abercrombie

According to AHSAA records, the last Susan Moore boys team to play for an area championship was in 2005. That team knocked off Oneonta in area tournament play before finishing as runner up and falling to Weaver in Sub Regionals.

The 2021 Bulldogs played a familiar foe in the area semifinal game as they hosted the J.B. Pennington Tigers on Feb. 9. Logan Blackwell’s deep three-pointer with about 3 seconds left on the clock gave Susan Moore a two-point lead. As the clock hit :00, the Bulldog faithful celebrated the 59- 57 victory, which sent the boys to the area championship game and guaranteed these young Bulldogs a spot in the Class 3A Sub Regional.

“I don’t even know where to start,” Susan Moore coach Adam Wilson said. “What a night! We have been through some struggles, but with each struggle we gain a little bit of strength.”

On Friday night, the boys headed to Brindlee Mountain for the Class 3A Area 13 Championship. After four quarters of hard-fought basketball, those young Susan Moore Bulldogs were champions beating Brindlee Mountain 61-53. 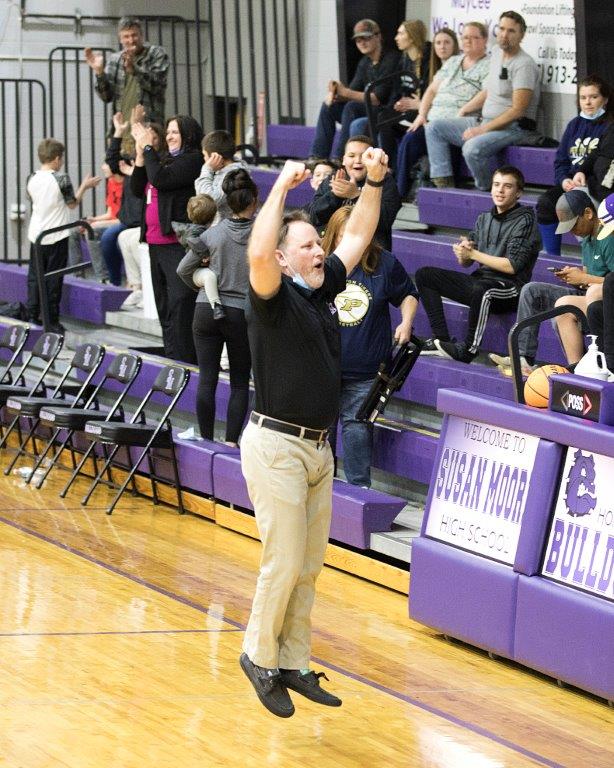 “The love and support from the Susan Moore community is secondto none, and it has always been that way,” Wilson said. “It has not been easy, but through hard work you will be rewarded. In life, you never know when that reward will come, but it will come in God’s time and in His way.

“These young men deserve this. With all that said, these guys want more. They are ready for the next challenge. We may win, we may not. But, they are going to put on that Susan Moore jersey and represent a school and community with everything they’ve got.”

The Appalachian Eagles also played some phenomenal ball over the last two games in the 1A Area 11 tournament. In round one, they put up 91 points and held Jefferson Christian to 63. Senior Noah Driggers scored 41 points helping the Eagles get to the area championship and guaranteeing a spot in Sub Regionals.

On Friday night, the Eagles hosted Sumiton Christian for the title. The boys got behind early and were down 21 in the third. But, they kept fighting back and with 1:46 left in the game, the Eagles took their first lead. Sumiton tied it up at 54-54 with 8.6 left. A foul on Driggers sent him to the free throw line. He hit one giving the Eagles a 55-54 victory.

“When you don’t quit this is what a team looks like,” said Matthew Helms as he described the celebration that erupted. “Hugs, high fives, chest bumps, tears, smiles. Down by 18 in the third quarter and didn’t have a lead until less than two minutes to go in the fourth quarter. The boys only had two leads the whole game and one was when it counted at the end 55-54.” 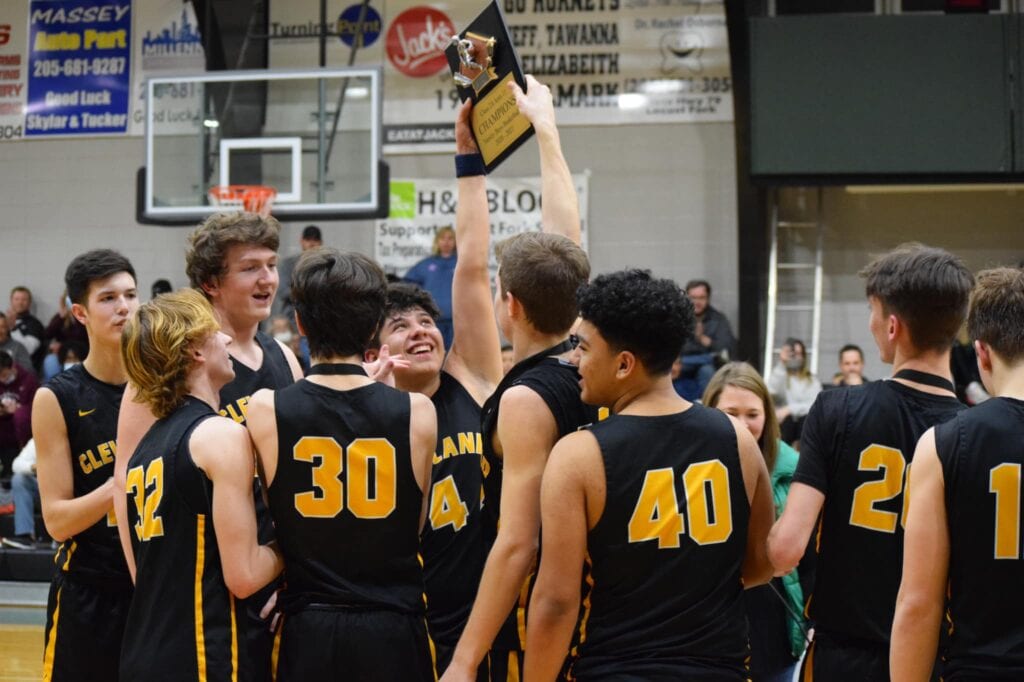 The Cleveland Panthers finished up their regular season with a 3-3 record in Class 2A Area 11 and were seeded third behind Locust Fork and Southeastern for the area tournament. In the semifinal round, the Panthers traveled to Southeastern where they knocked off the Mustangs ending their season.

Over the mountain in Locust Fork, the Hornets were hosting West End. By the time the final buzzer sounded, the Hornets had built a 19-point lead winning 76-57. Up next was the Panthers at home for the area title.

They exchanged shots in the first quarter with Cleveland up 14-13 at the end of one. Locust Fork began to pull away in the second quarter and headed into halftime with an 11-point advantage, 31-20. The Panthers clawed their way back in the third quarter outscoring Locust Fork 20-12 as they cut the deficit to 40-43. With under two minutes to go, the Panthers had added 20 more points while holding the Hornets to 9 giving Cleveland a 60-52 lead. When the clock hit :00, the score was Cleveland 66, Locust Fork 60.

The Panthers earned the 2A Area 11 Championship and a home game against Westminster in Sub Region play at 6:30 p.m. today, Feb. 17. The Hornets move on to Sub Regionals. They’ll travel to Midfield for a 3 p.m. tip off today, Feb. 17. 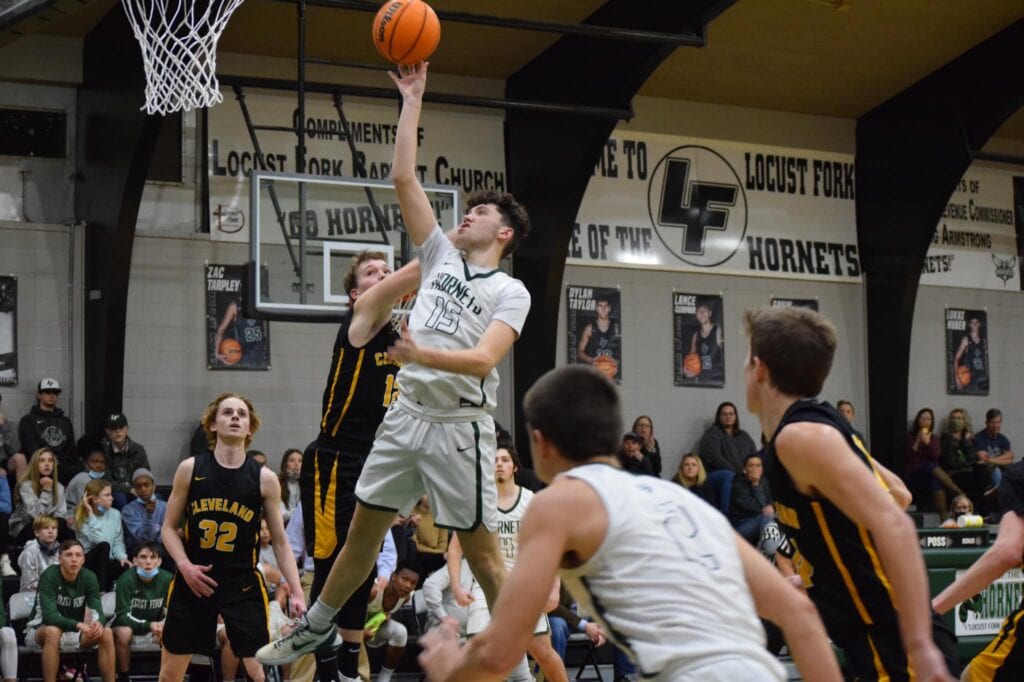 The Oneonta Redskins finished up the regular season just behind Good Hope. In semifinal action for 4A Area 11, the Redskins hosted Curry and cruised to a 43-33 victory. The Redskins and Raiders split their regular season games 1-1.

Throughout the season, the Redskins have been strong on the defensive end of the court giving them a chance to win each night. Friday’s championship was no different as the Redskins kept the high-scoring Raider offense in check. They held Good Hope to 50, but the Redskins found themselves a couple points short falling 48-50.

Oneonta travels to Haleyville for their Sub Region matchup. Tip off is 6:30 p.m. today, Feb. 17

The No. 2-seed Hayden Wildcats defeated the No. 3-seed Corner Yellow Jackets 72-56 in the opening round of the 5A Area 12 Tournament last Thursday. Hayden led 17-12 after the first period, but Corner took a 28-25 advantage into intermission. The Wildcats took control early in the third quarter with three-pointers from Collin Chappell and Nathan Morgan. When the dust settled at the end of the third quarter, Hayden was up 48-41. Hayden added 24 points in the fourth to seal the 16-point victory.

The win earned the Wildcats a trip to the Class 5A Area 12 Championship game Saturday night at No. 1 seed Center Point. Hayden kept it close in the first quarter. They were down by four, 13-17, heading into the second quarter. The Eagles outscored the Wildcats 13-7 in the second and took a 30-20 lead into halftime. Hayden came out strong in the third quarter scoring 17 points to Center Point’s 9. Heading into the final period, Hayden was only down by two, 37-39. Both teams fought throughout the fourth. The Wildcats put up 15 points, but the Eagles added 16. The Eagles claimed the title with a 55-52 win over Hayden.

Hayden travels to Fairfield today, Feb. 17, for their Sub Region game. Tip off is 6 p.m.