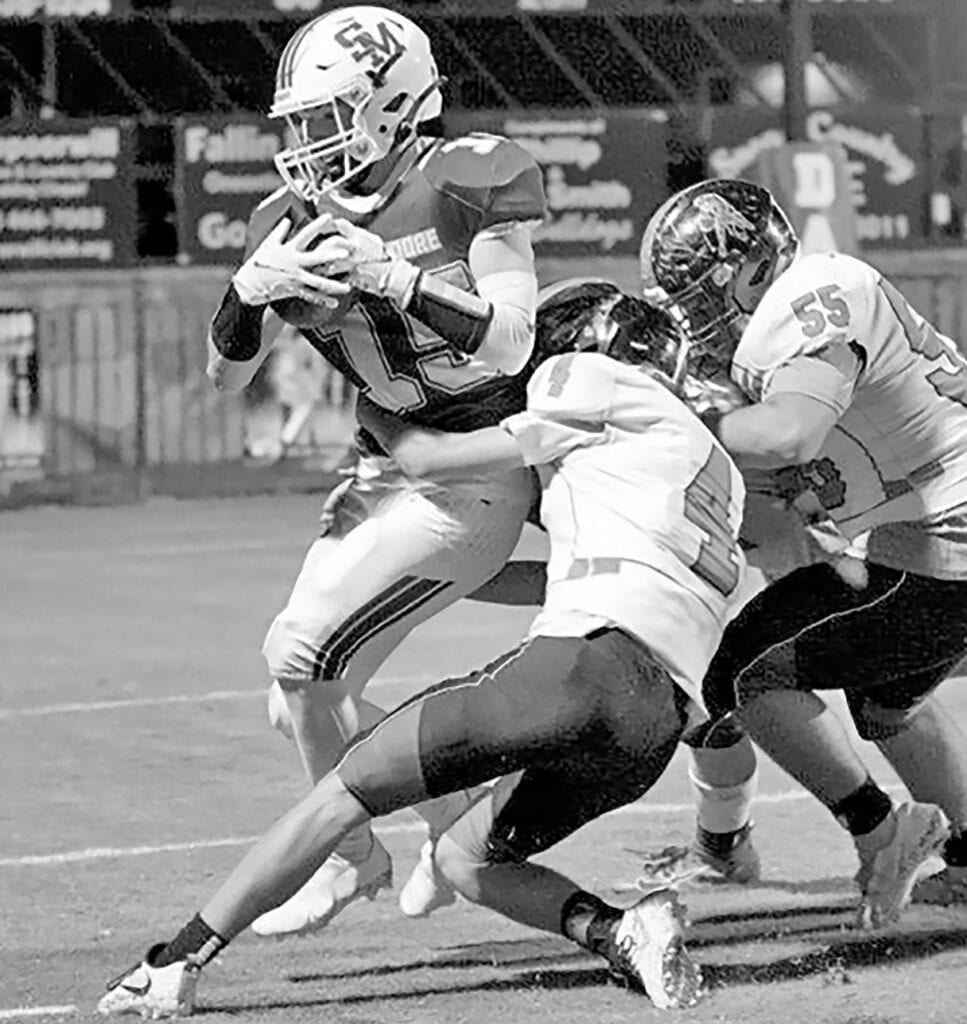 Back at home in the friendly confines of Larry “Pod” Patterson Stadium, the Susan Moore Bulldogs celebrated Homecoming 2020 as well as the end of a three-game road trip and a four-game losing streak with a big win over region rival Holly Pond. The 35 points they scored marked their second highest total while the defense held the Broncos to only 6.

Derek Doty got the Bulldogs on the board first crossing the goal line from 1-yard out with 3:02 left in the opening quarter. Sure-footed Axel Silva hit the extra point for the 7-0 lead. A determined Bulldog defense didn’t let up keeping the score at 7-0 as the quarter ended.

A little more than four minutes into the second quarter, Zach Smith broke through the line running it for a 12-yard score. Silva’s kick was good and Susan Moore was up by two scores. Later in the quarter, it was Doty’s turn again. This time he took off scoring on a 16-yard run. On the two-point conversion attempt, Camden Lackey’s 3-yard toss to Brody Miller gave Susan Moore a 22-0 lead at the half.

The Bulldogs didn’t waste any time as the third quarter got underway. When Doty caught Lackey’s 8-yard pass for Susan Moore’s fourth TD of the game, only two minutes had ticked off the clock. Silva’s miss on the extra point attempt was his first of the season, but the Bulldogs’ lead was 28-0. Holly Pond’s only score on the night came a couple of minutes later on Kadin Suryono’s 27-yard run. A failed two-point conversion attempt kept the score 28-6.

Before the third quarter ended, the Bulldogs found the end zone one more time as Doty’s 13- yard pass found Axel Calderon for Susan Moore’s sixth and final touchdown of the night. Silva’s kick was on the mark this time, giving the Bulldogs a 35-6 lead. From there, the Bulldog defense kept up the pressure and kept the Broncos out of the end zone.

Susan Moore’s defense held the Bronco’s to 204 total yards with 98 coming through the air and 106 on the ground. They picked off Holly Pond’s quarterback three times with Smith, Doty, and Jose Calderon each snagging one. Jose Calderon led the team in tackles with seven. Gavin Monroe recorded six tackles while Smith had five.

Lackey was 9-for-10 on the night with 131 yards through the air. He recorded one touchdown, converted one two-point conversion attempt, threw zero interceptions, and ran the ball for another 37 yards. Smith’s 39 rushing yards and 39 receiving yards gave him a total of 78 for the game along with his touchdown. Miller was the recipient of four Lackey passes ending the night with 60 yards plus the grab on the two-point conversion in the second quarter.