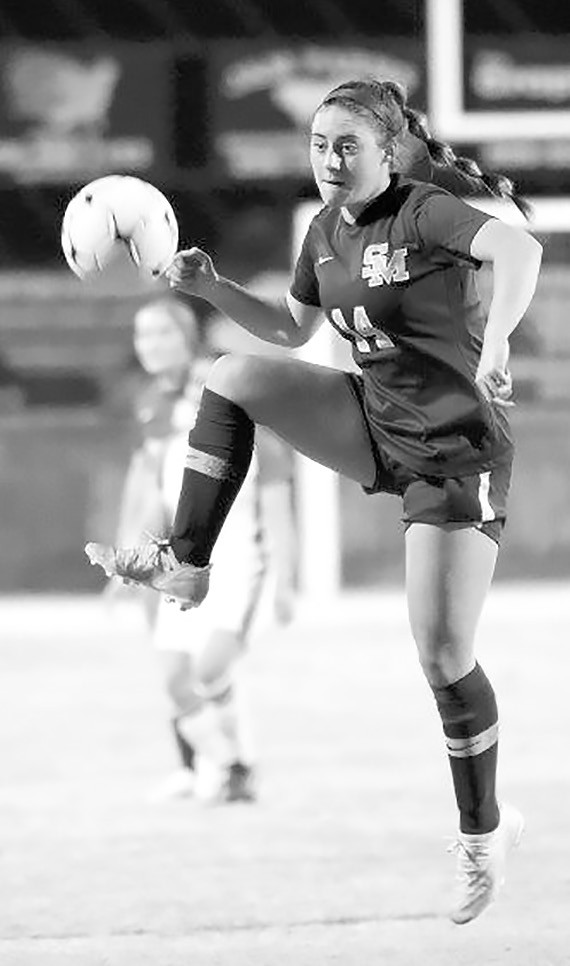 Susan Moore’s Claire Perkins is the current AHSAA girls record holder with 12 straight games with a hat trick (scoring three or more goals). During the Collinsville game, Perkins pulled off a perfect hat trick (a left-footed goal, a right-footed goal, and a header goal). -Sherry Abercrombie

Under the Friday night lights, Oneonta and Susan Moore battled it out on Larry “Pod” Patterson Field for two exciting games of futbol. Susan Moore boasts two top 10 teams in 1A-3A, not to mention some of the top female performers in the state.

The boys took the field first. While the Redskins aren’t ranked in 4A-5A, the boys have been playing good soccer this season. They came into the game with just one loss and a defense that’s given up only seven goals on the season.

Oneonta struck first with a goal in the first half of play. While the Bulldogs got a goal of their own in the second, Oneonta added a goal, too, giving the Redskins a 2-1 victory.

Game two featured the Lady Redskins and the Lady Bulldogs. Through 16 games, Susan Moore had scored 110 goals making them one of the state’s most prolific scoring squads. But the Lady Bulldogs also feature a top defense that had five shutouts coming into Friday’s game.

The Lady Bulldogs lived up to their reputation beating the Lady Redskins 6-0. Susan Moore’s Claire Perkins scored four goals. Claribel Robles scored one goal and had three assists. Two assists were credited to Perkins and one to Kristy Cervantes. Cervantes scored a goal and added one assist to Perkins. Maricarmen Gonzalez also had an assist.

Susan Moore’s defense got it’s sixth shutout. Coach Nick Butts said, “I like how our defense is playing right now. We have a lot speed on defense with Samantha Zavala, Audrey Lauderdale, Mia Martinez, Lizbeth Reyna, and goalkeeper Maricarmen Gonzalez. This group has been outstanding all year.”

Perkins, a junior, has been scoring goals at an amazing rate so far this season and has etched her name in the AHSAA Soccer Record Book in the process. Her streak of 12 straight games with a hat trick (three or more goals in a game) set a new AHSAA girls’ high school soccer record.

Her streak began Feb. 5 with four goals in a 9-2 victory over Douglas and was finally snapped on March 9. Her streak shattered the previously reported high of four straight matches set by Cullman’s Abby Branham in 2018. Then in the Lincoln tournament, she scored seven goals in a 10-0 win over Munford, three goals versus Hokes Bluff and Scottsboro, and five goals versus Lincoln.

During that stretch, teammate Briley Dutton had six assists to Perkins in the Calera win, and Kristy Cervantes had five assists versus Munford, Pennington, and Pinson Valley. Claribel Robles also had four assists in the 10-0 Pinson win.