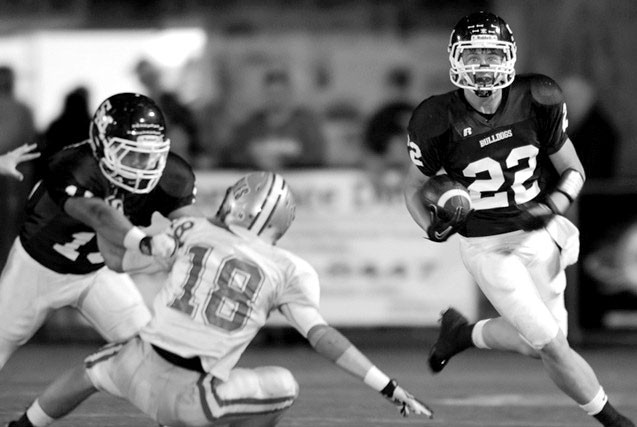 3A Region 6 to 3A Region 5. One would think that the Bulldogs would get a couple of new teams to play. One would be wrong.

Susan Moore makes the move and they bring all but one old region foe with them. Hokes Bluff moved from 3A to 4A and the Eagles have been replaced in the region by former 2A Cleveland.

That results in a schedule that should look awfully familiar to Bulldog fans.

Cleveland and West End are the only new teams on the schedule with the only other change being that the rivalry game with Oneonta is now slated for Week 5 instead of Week 10.

Something else that Bulldog fans will notice about this year’s schedule – four of the first five games are on the road and four of the last five are at home. Week 1

Susan Moore travels to West End to open the season in the renewal of a rivalry that hasn’t been played since 2007.

West End struggled to a 3-7 record a year ago under Hayden Stockton but the Patriots are looking to return to the winning ways of old this year. Randy Hallmark has returned to Walnut Grove to try to recapture some of the old magic.

The Bulldogs will travel to Cleveland in Week 2 for the Panthers first-ever region game in Class 3A.

The Panthers will be coming off the season opener with J.B. Pennington. Danny Adams’s team will look to grind the opponent into the ground with a Double-Wing offense that has just enough misdirection and play-action passing to make it tough to stack the line of scrimmage.

These teams have met 50 times and Susan Moore leads the series 31-19. Oddly enough – this game was the traditional season opener in the county but these teams haven’t met in the regular season since 2003 when the Panthers beat the Bulldogs 17-14. Week 3

Susan Moore will finally get a home game in Week 3 as Saks comes to the Pod.

Saks is one of the most athletic teams in the region and the Wildcats will be a handful this year. Quarterback Timothy Johnson (6’0 180) and running back Ladarius Young (5’9, 170) are a pair of dynamic skill players that will make things very tough on opposing defenses.

Susan Moore will try to do something it has not done before in Week 4 – beat Weaver. To make it even tougher, the game will be played at Weaver.

The Bearcats were a solid 7-4 last year and almost upset eventual state runnerup Madison Academy in the first round of the playoffs, losing 27-26.

Weaver has a ton of talented skill kids, led by 5’10, 170-lb. junior Chris English. He is a special talent with the ability to score from anywhere on the field.

The Bulldogs will play their fourth road game in five weeks when they travel to Oneonta’s Gilbreath Stadium for a non-region game on Sept. 28.

The Redskins return a lot of talent from last year’s 12-3, 4A runner-up. This will be an Oneonta team that will have already faced Pinson Valley (No. 3 in 5A), Guntersville, Locust Fork, and Crossville so the new starters should be pretty seasoned.

The Bulldogs begin the second half of the season hosting the dangerous Ashville Bulldogs.

E.J. Moss (6’4, 210 Jr) is a talented quarterback with a huge arm. He has several receivers to throw to that can make plays after the catch.

The problem for Ashville is up front. O’Bryant’s first task is to find some linemen on both sides of the ball.

A totally different set of Bulldogs will come to town in Week 7 when Piedmont invades the Pod.

Under sixth-year head coach Steve Smith, Piedmont has returned to the top of Class 3A. The Bulldogs were 12-1 a year ago and are picked No. 3 in the initial poll by the Alabama Sports Writers Association (ASWA).

Sixteen seniors graduated from last year’s team but the Bulldogs return their best player in Kerry Major (6’2, 210 Sr). He has plenty of talent around him.

These teams have met seven times and Piedmont leads the series 4-3, including last year’s 40-14 win at Piedmont. Susan Moore last win in the series was a 34-6 victory in 2003. Week 8

Susan Moore’s only road trip of the second half of the season will not be easy as the Bulldogs travel to Glencoe for a Week 8 showdown.

Graduation hit Glencoe hard but you can bet that the Yellow Jackets will still put a good defense on the field.

These teams have met just four times and Glencoe has won three times, including last year’s 20-10 victory at home. Susan Moore’s lone win was a 14- 10 victory in 2002. Week 9

The Bulldogs will close the region schedule with a visit from White Plains.

The Wildcats have been competitive under fifth-year head coach Heath Harmon and won their last three last year to finish 3-7.

White Plains has good skill kids returning but the Wildcats have struggled to find linemen on either side of the ball.

These teams have met four times over the years and Susan Moore has won all four, outscoring the Wildcats 115 to 19. Susan Moore won 34-7 last year. Week 10

Susan Moore will close out the 2012 regular season with an old rival when J.B. Pennington comes to town.

The Tigers have gone 1-9 and 0-10 the last two years but they are under a new head coach now as Keith Garner was hired in the spring.