Bull Fest 2014 kicks off this weekend 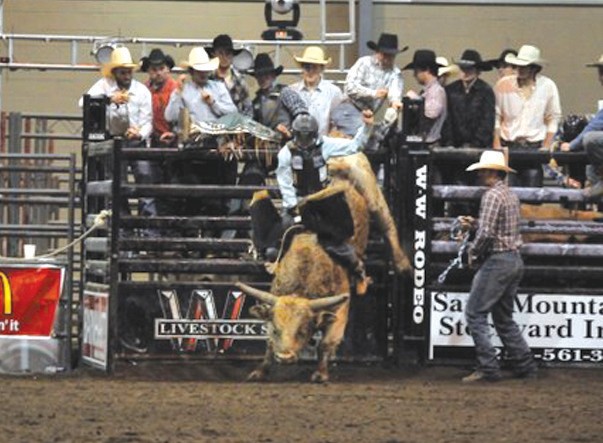 Josh Moorer of Cleveland is expected to compete this weekend.

This Friday and Saturday, at the Blount County- Oneonta Agri-Business Center, the first-ever Bull Fest, presented by JL Productions and The Hitchin Post Western Wear, is scheduled to begin at 7 p.m. Event producer Josh Latham, as a Blount County native, hopes to bring a high-quality event beneficial to this area.

“We’re presenting Blount County with a newer, bigger, and better production,” Latham says. “When our event-goers leave, we want them to leave talking about how entertained they were. I want people in this area to be proud to say this event is in their hometown and look forward to it each year. We have plans to take this event bigger and better in the future.”

While offering a better production, Latham is also using Bull Fest to help those in the community.

“We will award a scholarship to a technical school student and have a canned-food drive,” he says. “To purchase a presale ticket, stop by The Hitchin’ Post Western Wear, or the Hometown Bank locations in Pinson, Snead, or Oneonta. If you give a can of food while purchasing a presale ticket, your cost will be $12 for adults and $8 for children. Normal prices will be $15 for adults and $10 for children. Five and under get in free.”

Canned-food donations will also be taken during the event at the door, however, only presale ticket prices will be reduced if a can of food is provided. All cannedfood will go to local food banks. Professional entertainment

Latham says it was an important task to get wellrespected entertainers to participate in the event, and as someone who has been a part of Professional Bull Riding (PBR) events in the past, he used his connections to bring professional entertainment to Blount County.

Two of the more well known competitors will be Sid McKissick and Jon Roberts. McKissick, of Wetumpka, has performed on televised PBR events, and Roberts recently won the Oklahoma City Cowboy Protection Matches.

Luke Kaufman is set to announce the event. The North Carolina native, also a singer, has announced at Championship Bull Riding events, and the funny man, Matt Merritt, also from North Carolina, recently performed at the PBR Australian Finals.

Many of the bulls featured this weekend have been seen on television during the PBR Build Ford Tough Series, according to Latham.

Don’t forget local talent. Josh Moorer will be participating during Bull Fest. Moorer, of Cleveland, has been a Built Ford Tough Series participant.

The event will include 25 bull riders and 12 barrel racers each night, according to Latham.

An autograph signing will be conducted at The Hitchin’ Post in Oneonta on Saturday from 10 a.m. until noon. Kaufman, McKissick, Merritt, and bull riders will be available.