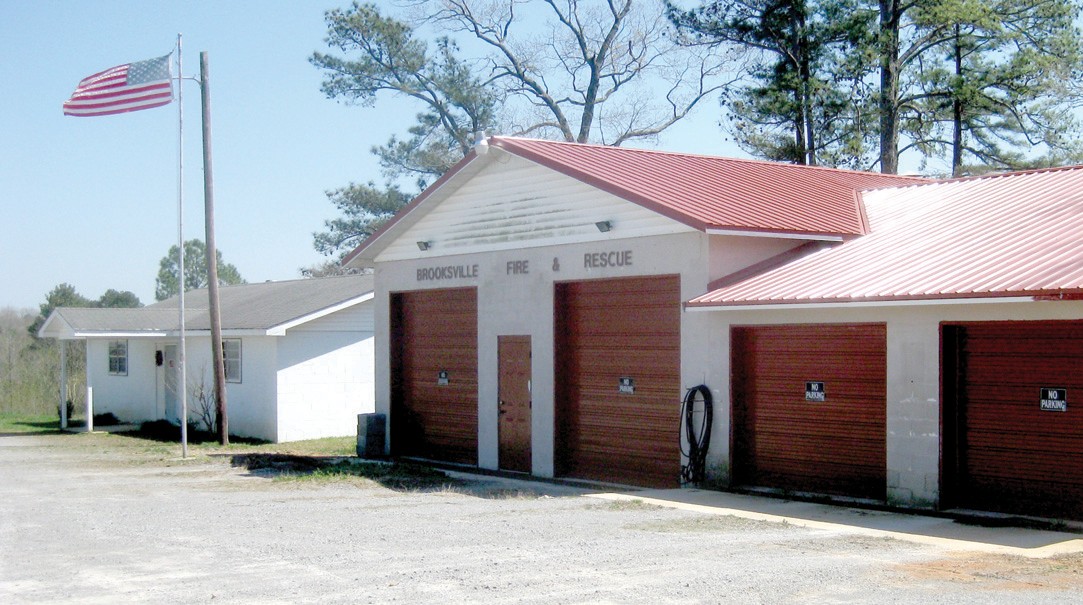 Too close for comfort? Brooksville Fire and Rescue building at right, with Brooksville Community Center shown nestled close by. Though buildings stand literally in each other’s shadow at different times during the day, any impression of coziness is misleading. Amid diverse charges of miscarriage of the public interest – including mishandling of funds and discrimination in membership practices – the two buildings symbolize the conflict that has seemingly become endemic to this small community as factions associated with each struggle to control the future of its predominant institution, the volunSee teer fire department.

Brooksville Volunteer Fire and Rescue Department’s revised membership requirements are apparently the most strenuous among county fire departments, based upon a spot check around the county.


The by-laws as revised in October also ban use of recording devices in business meetings, except that done for fire department purposes.

According to the by-laws, to become a member, a person must have paid $60 annual fire dues and must have completed a membership application. Fire dues once paid are not refundable, whether or not that person is subsequently accepted as a voting member of the department. A prospective member is subject to a background check, according to Brooksville fire department chief Lane Pettit, although that provision is not specified in the by-laws.

The prospective member is required to attend 18 consecutive monthly meetings before becoming a full, voting member of the organization.

Quoting from the by-laws: “New voting member: any member as stated in Article 3.9(A)” (the article requiring payment of fire dues and completing a membership application) “and is present at 18 consecutive monthly meetings. (At which time person is nonvoting, this is a probation period. During this time a person can be dismissed.) Loss of voting privileges will occur when the member has missed three consecutive monthly meetings, unless member is attending Fire or EMS Training.”

Pettit said the lengthy probationary period ensures candidates for membership are committed to becoming fully-qualified volunteer firefighters. The 18 months allows candidates ample time to attend the 160 hours of training required to receive state certification, or to make adequate progress toward that goal for the department to know they are committed.

He said the department must make a substantial investment of $1200 to $1500 per person to send them to the required training. That amount covers required turnout gear, books, materials and course fees.

“That gives us a chance to determine if the person is really interested in being a firefighter and whether he or she is going to stay with it or not,” he said.

Questions concerning membership requirements were raised by Brooksville area resident Larry Alldredge, who charged that 10 applicants were denied membership recently by vote of the department, merely because they were associated with what he calls “the community,” the group loosely identified with the Brooksville Community Center. That group has opposed the fire department’s plans to expand the station house location adjacent to the Community Center Building and has managed to prevent the expansion from taking place.

Pettit said none of the persons refused membership had paid their fire dues for the current year.

“That’s what they say, but they’re not going to let any of us in whether the fire dues are paid or not,” Alldredge said. “Those requirements are completely ridiculous and unreasonable. Nobody else requires 18 months’ probation. They’re changing the rules as they go to keep us out, whatever it takes,” he said. Alldredge said that one of the 10 people refused membership – Allen Jones – had paid his fire dues, and the department denied him membership anyway. He added that Jones then asked for his money back and it was refunded by the fire department.

“That’s when they put in the part about the fee being nonrefundable,” Alldredge said. He added that the fee was originally called a membership fee, but the department had changed the language to refer to it as “fire dues” to support the interpretation that it is nonrefundable.

Pettit said Jones had been refused membership because, in a public meeting before the county commission, he had spoken against the department’s effort to secure a grant through the commission. Subsequently, the grant was not approved. Other charges

Alldredge expressed his belief that The Blount
Countian’s
coverage of the conflict over the Brooksville Fire Department has been unfair, not based on facts, and misleading in its description of the situation as having its roots in a family feud of long standing.

“It’s not the Pettits against the Alldredges,” he said. “It’s the community against the Pettits. We’re just trying to straighten this mess out and stop some of what’s been going on and get a better insurance rating for homeowners in this area,” he said. He added the group has talked to the district attorney, the sheriff, the county commission, and lawyers in an attempt to get help to remedy the situation, all to no avail.

Alldredge said the community group is routinely denied access to public documents such as by-laws, meeting minutes and membership rosters. All such documents requested by The Blount Countian,
were provided without hesitation by the fire department.

“If he (Alldredge) asks you for copies of what you got, give’em to him. They’re open to the public,” Pettit said.

Recording devices could be withdrawn

On use of recording devices, article 5.4 of the Brooksville Fire and Rescue by-laws states: “Recording devices audio or video will not be allowed during business meetings. The only exception is for Fire Department record keeping.”

The Blount Countian
contacted Sheriff Loyd Arrington to ask if he would enforce the fire department’s ban if called upon to do so.

“That would be in violation of the Alabama Open Meetings law, as I understand it, so the ban wouldn’t be enforced if I was there,” Arrington said.

When questioned on the matter, Pettit said he would “look into that further,” referring to the recording devices ban. “I’ll consult with an attorney on that. We might have to look at changing that. I’ll look into it further and see,” he said.

In a follow-up conversation on Tuesday (yesterday), Pettit said the recording ban would be removed from the by-laws, with perhaps reasonable rules added to prevent people with video cameras from “aggravating you by getting right up in your face when you’re talking and trying to concentrate.”