Brindley adds another achievement to his long career 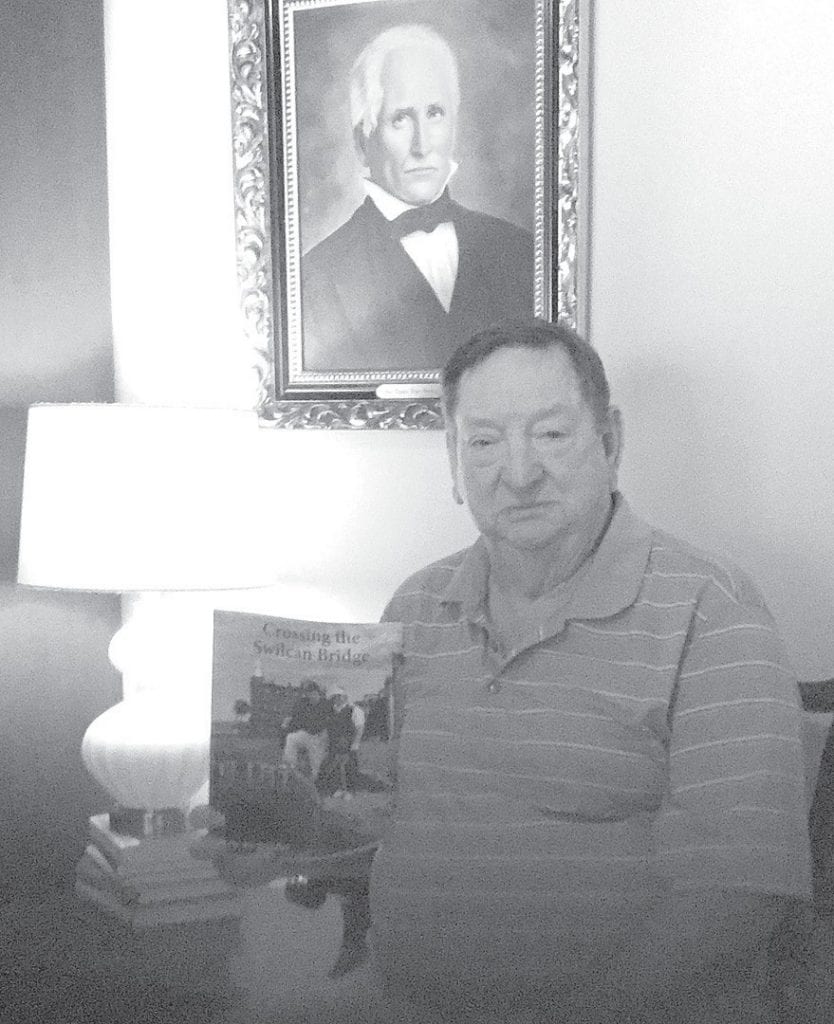 Dr. Joe Brindley sits in front of a portrait of his great-grandfather, Mace Thomas Payne Brindley, at Joe’s Limestone Springs home while holding a copy of his just released book, Crossing the Swilcan Bridge.

Oneonta advocate, public servant, and retired educator Dr. Joe Brindley has completed another item on his bucket or, as he might call it, his “crossing the Swilcan Bridge” list. Brindley has had his autobiography published.

The book Crossing the Swilcan Bridge provides vignettes in the life of this Blount County native – from his days as a hard-working farm boy, highly successful high school student-athlete, military recruit, college student, teacher-coach, husband-father, state lawmaker, PhD college administrator, private businessman, to philanthropist. He chose the title to emphasize a long-held dream of playing the Old Course at St. Andrews, Scotland, where that bridge is located, and as a metaphor for the goals in life he has set and achieved.

So many of the stories in the 128-page book include lessons learned for a man who comes from a family with long-held Christian values. That noted, many of these stories include enough humor to keep the reader chuckling at the escapades which have filled the almost octogenarian.

In meeting with Brindley, this reporter thumbed to the chapter listings and asked of the section titled “The Hole-in-the-Wall Gang.” Brindley retold that story, based on events covered in a 1980s Birmingham News article.

Reporter Faye Brewington coined the term as she learned of Joe and friend Dan Martin’s successful 1959 attempt to scale a wall at Legion Field, spend a night in sub-freezing cold, and view their beloved Crimson Tide football team defeat Auburn for the first time in a few years. They, along with additional friends, accomplished the same task each of the next two years, although under different circumstances with still more adventures.

After the story’s publication and upon Brindley meeting legendary Coach Paul “Bear” Bryant, Bryant reportedly told Brindley he wanted him at all the Alabama-Auburn games, since the Tide had won each during those three years.

Brindley’s personal sports love has morphed from football to golf over time. From days teaching and coaching at Oneonta, Brindley discovered golf through one of his players. He instituted the school’s first golf team and discovered his own infatuation. The book details some of his most pleasant golf memories, which he readily notes include touching times spent with his oldest child, Andy.

The work includes stories of wife Syble, daughter Beth, grandchildren and many other names Blount Countians will recognize. Filled with color photographs, those who love personal histories will find much to enjoy in the read.

Brindley will hold a book signing at the Oneonta Public Library Saturday, July 14, from 2 p.m until 4 p.m.