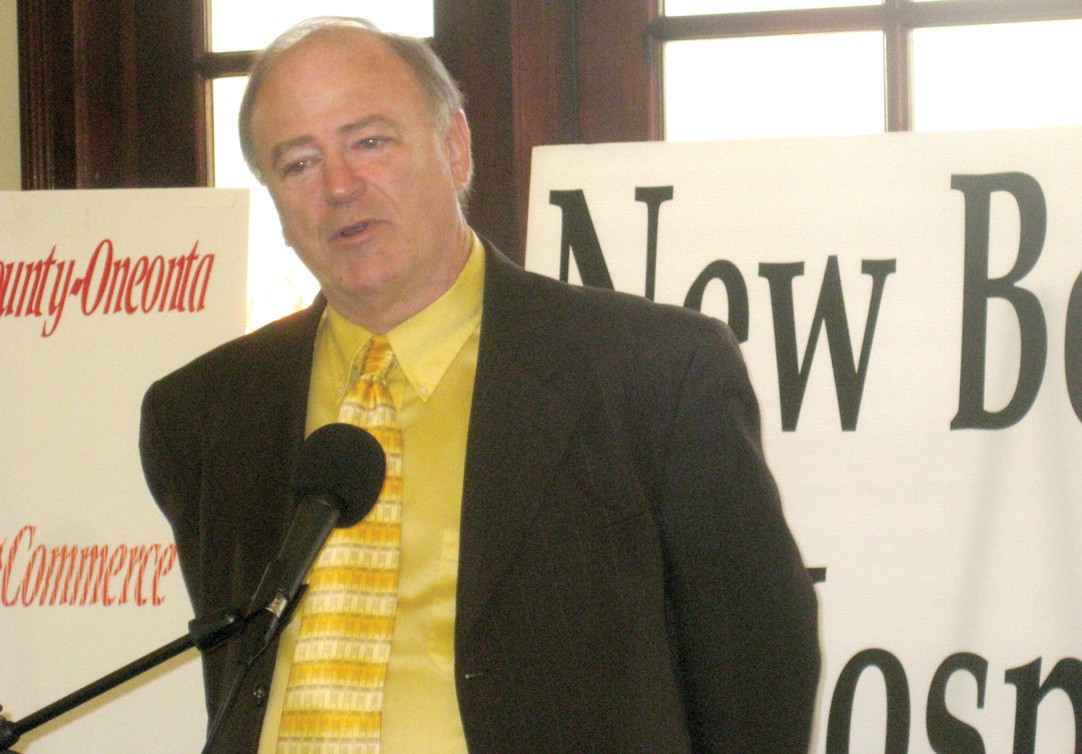 Chamber breakfast speaker Dr. Larry Powell cut through the fog of political posturings and pronouncements at last week’s breakfast with provocative observations on the post-election political landscape. Powell is professor of communications specializing in politics (not government, as he pointed out) at the University of Alabama at Birmingham. He was also the expert political commentator for NBC-13 during the recent election.


Among Powell’s observations was the comment that the Republican Party in Alabama “surprised themselves with their success” in the November elections. Powell said the party’s game plan was to win 18 or possibly 19 Senate seats in the Legislature. Instead, they won 22. He said their surprise was evident when several Republican candidates whose prospects were considered dim called the party organization headquarters in Montgomery to report their victory. Party functionaries did not at first believe them, Powell said. Ethics legislation a ‘must do’ for statehouse Republicans

He said Republicans in the Legislature are now in a strong position to pass ethics legislation. “They practically have to do it,” he said. “They’ve been introducing ethics bills for the last several sessions and sitting back watching the Democrats kill them. They’ve been calling for this so long, they have to act on it now.”

Powell noted that a significant number of Republican legislators don’t particularly like Governor- elect Robert Bentley because “he listens to only two voices: Paul Bryant Jr. and Paul Hubbert.” He said Bentley’s success as governor will depend on his ability to convincingly widen his circle of advisors. Benley’s cabinet appointments will signal the extent to which he understands the dynamics in play, he added.

Referring to the historic state election that saw Republicans gain control of the Legislature for the first time since the 1870s, Powell said “the message of this campaign is that if you’re gonna be a Democrat, you gotta be a liberal. If you’re moderate (and a Democrat), you lose.” He cited the case of U.S . District 2 Rep. Bobby Bright of Montgomery who lost his re-election bid to Republican challenger and former Montgomery City Council member Martha Roby.

“Why the Republicans opposed him is a mystery; they had his vote most of the time anyway,” Powell said, adding that Bright might have won the close election had he taken a liberal position on health care legislation.

Summarizing the state political scene following the election, Powell said “we now have a bipolar situation in the Legislature: strong liberals versus strong conservatives” with all that implies concerning prospects for gridlock.

Moving to national politics, Powell analyzed the scene as follows:

•President Obama’s approval ratings are quite low, but he’s still the most-liked political figure on the national scene, including Sarah Palin.

•Obama is the least qualified of recent presidents in terms of background and experience, even among several not-especially well qualified presidents of recent decades. It takes time and training to learn the job of president; Obama’s success depends on how quickly he learns the job. He hasn’t learned it yet, according to Powell.

•When asked the party’s national priorities for the coming two years, Republican leader Mitch McConnell said “to make sure that Obama is a one-term president.”

“Wrong answer,” Powell said. He should have answered more diplomatically by saying something like “to make things better for the American people.”

•“Anything legislators try to do to cut the deficit is going to make somebody mad,” Powell said. “I don’t think they’re going to be successful.” Powell added that when President Clinton got the national debt under control in the 1990s, he did it by “vetoing everything.”

•If the Republican nominating convention were held today, Sarah Palin would be the nominee and she would lose the election. The Palin faction is not a majority in the Republican party, it simply represents the largest plurality. That wouldn’t be sufficient to win a national election.

•Republicans are trying to recruit Jeb Bush for a 2012 run for the presidency. He’s a bright, competent person, “but would the American people want a third Bush in the presidency?” Powell thinks not.

•Audience question: What about Haley Barbour as nominee for president? Powell’s answer: “He has a major weakness – the strongest southern accent anywhere around.”

•Audience question: What about Florida’s Marco Rubio as Republican presidential nominee? Powell’s answer: “Not a chance. He’s got so many skeletons in his closet, there are bones sticking out.”

•After a historic victory in 2010, the Republicans are “set up to lose in 2012” according to Powell. “The Republican establishment doesn’t like the Tea Party. That’s the single biggest thing that will make them lose in 2012.” Predictions on other issues

•Constitutional reform is unlikely any time soon. “We’ve got the worst constitution around, but there’s so much cynicism about the process, no one’s going to be willing to put together a constitutional convention.”

•A number of unqualified candidates won election in Alabama this year. They’ll get knocked out in four years – not necessarily by Democrats, but by better Republican candidates.

•Commenting on Nancy Pelosi’s status as former majority and newly-chosen minority leader: “You need someone who knows what’s going on in the heartland of the country – the Great Lakes states, the south and the great midwest – not someone from California.
Those people are just weird
out there.”

After thanking Powell for his presentation, chamber president and breakfast master of ceremonies Charles Carr produced the quotation of the day, epitomizing the 2010 election, both nationally and especially in Alabama.

Carr quoted this wakeup call to Democratic Party leadership that appeared in The Birmingham News
the week after the election. It was attributed to long-time Limestone County Sheriff Mike Blakeley: “A one-legged child molester running as a Republican would have defeated Nick Saban running as a Democrat in Alabama this year,” he said.