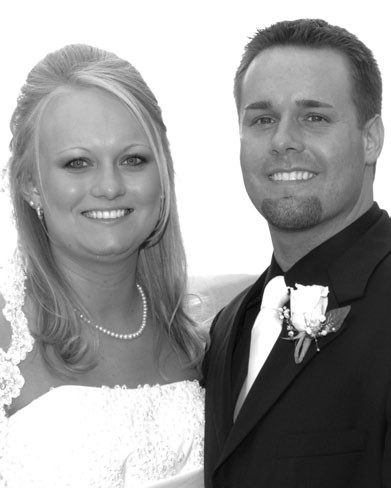 Haley Michelle Brannan and Brian Ashley Vick were married April 18, 2009, at 5 p.m. at Guntersville State Park Lodge in a ceremony officiated by Terry Hudson of Baileyton. The bride was given in marriage by her parents Brad and Robin Brannan of Holly Pond and Debbie Brannan of Cullman. The groom’s parents are Jimmy and Paula Vick of Oneonta; his father was best man.

Maid of honor was Briana Smith of Arab, and bridesmaids were the bride’s cousin Whitney Carroll of Goldridge, Heather Cobbs of Joppa, and Jessica White of Oxford.

Groomsmen were the groom’s brothers Clint Vick of Guntersville and Derrick Vick of Oneonta and a friend Brent White of Oxford. Ushers were the bride’s brothers Patrick Mattox and Paul Mattox.

Brad and Robin Brannan, the bride’s parents, furnished music for the ceremony and sang “Only God Could Love You More.” They also entertained attendees with a childhood-memory DVD of Brian and Haley during the reception.

Jan Barnett of Vinemont provided the bride’s and groom’s cakes for the reception, held in the lodge’s Golden Rod Ballroom.

The morning after the wedding the couple traveled to Riviera Maya, Mexico, for a five-day stay at the Aventura Spa Palace Resort. They now reside in Oxford with their puppy Molly.