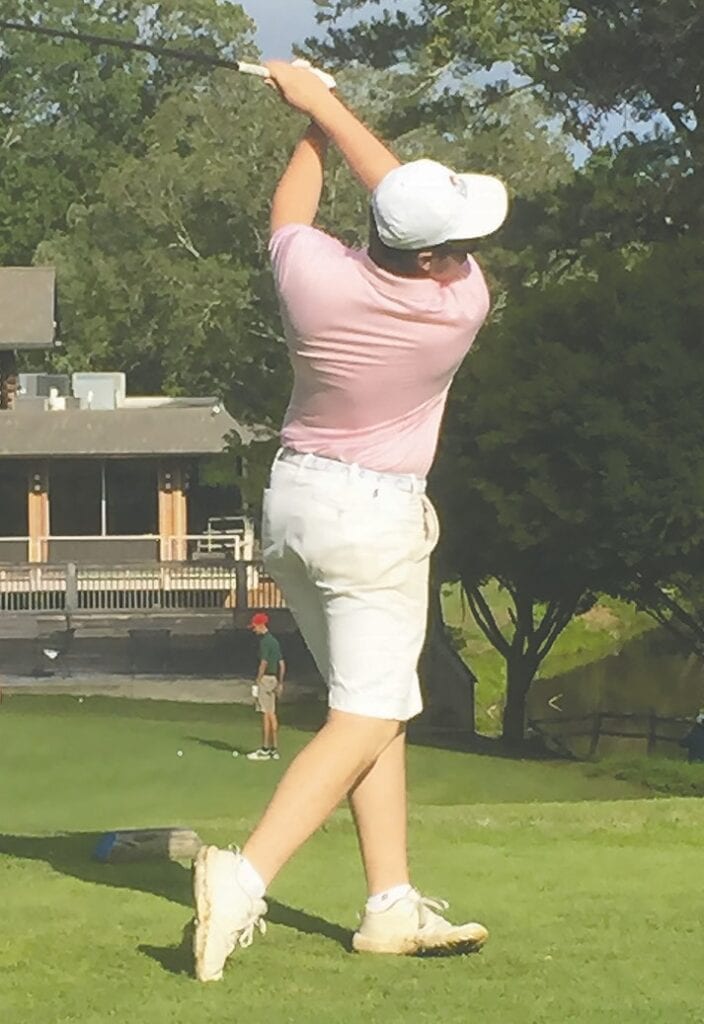 Oneonta’s Russell Boren III (right) teed off against some of the state’s best junior golfers earlier this month in one of Alabama’s oldest junior golf tournaments, the 50th annual Pigeon Dove Junior Championship at Musgrove Country Club in Jasper. After 36 holes, Boren had climbed the leaderboard and a birdie on the par-5 502-yard 18th hole put him in a three-way tie for first.

“I am very proud to have won, especially under so much pressure,” Boren said. “Every single shot counts.”

Boren finished round one with a 73, which left him in fifth place and four shots off the lead. He started round two with a par-bogey-par par just as he had on opening day. But, bogeys on five and nine left him with +3 on the front nine, one shot more than the previous round. He rebounded, though, with birdies on holes three and four. After pars on 12 and 13, Boren bogeyed the next three. After a par on 17, Boren was only one shot off the leaders. Just as he’d done in round one, Boren birdied the 502-yard par-5 18th hole.

“I did not give up, even at the very end,” Boren said. “Musgrove is a short course, but you had to hit it good off the tee. It had a lot of trees that came into play and would block your approach shot.”

The following is taken from the 1968 Junior World Program created by one of the event’s founders,

“The idea behind the Junior World Golf Championships is simply ‘YOUTH.’ The San Diego County Junior Golf Association is founded on the principle of serving young people in the hope that by doing so today’s youth will have a better chance of creating the world we all want.

“The Junior World tournament is an international extension of that principle. We believe that by bringing together young people from all parts of the world and all parts of our nation, we are helping to bring about greater understanding among people of differing cultures and values.”

“I am very excited about this opportunity,” Boren said. “It’s a big deal to get to play in the Junior World Championship. I’m the one kid that gets to play from Alabama, and I get to play kids from all over the world. It’s going to be an awesome experience.”

The four-round tournament will be played on Torrey Pine’s South Course, which is the site of this year’s U.S. Open that tees off tomorrow. Torrey Pines sits on the coastal cliffs overlooking the Pacific Ocean and boasts two picturesque 18-hole courses.

“It’s going to be tough,” Boren said. “I have to keep my head up and study hard. I want to represent Alabama well.

“The rough is thick and it’s very windy. I realize it’s going to be a challenge, but I’m up for the challenge.”

Boren is the son of Janie Boren and the late Russell Boren Jr. He is a rising junior at Oneonta High School and a member of the OHS golf team. He finished fifth in last month’s 4A State Golf Championship.