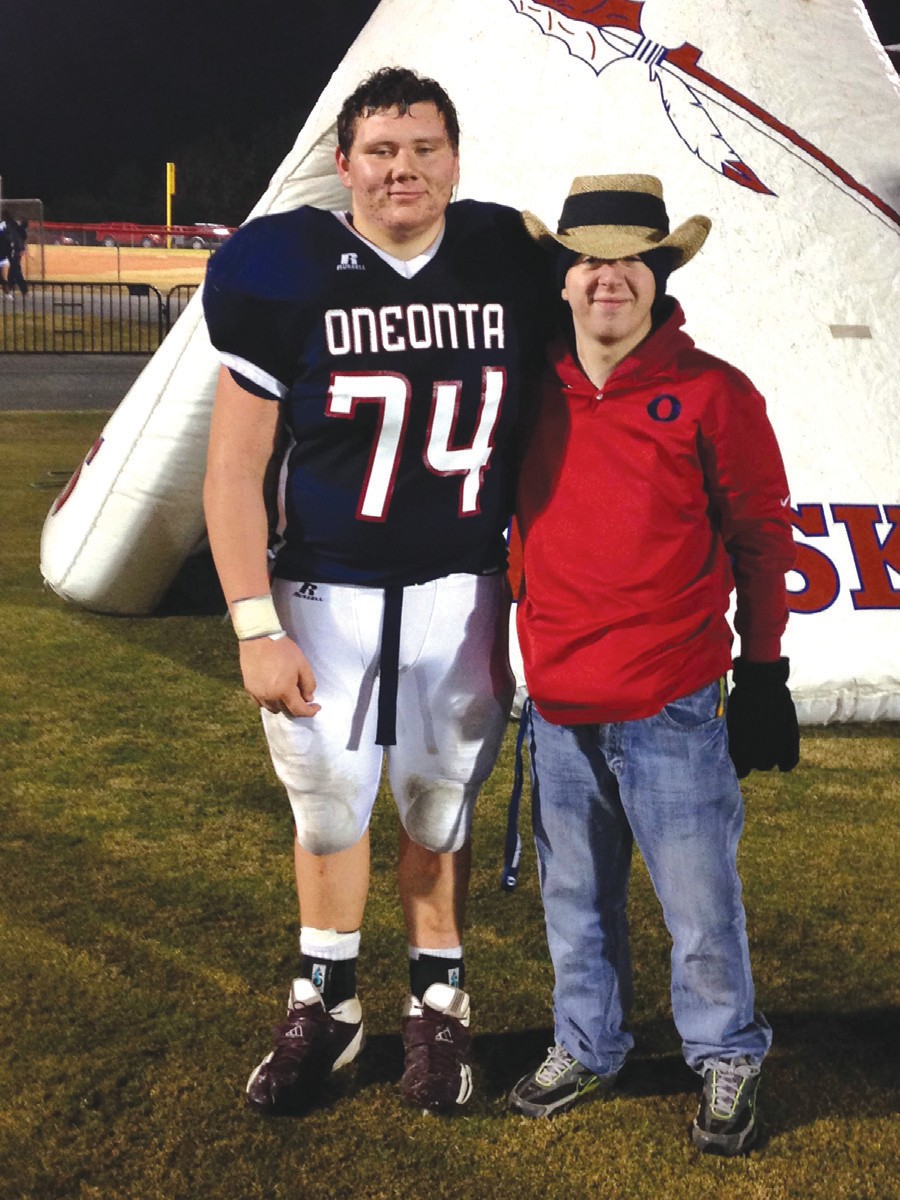 One of the best experiences Tyler Studdard has shared with his brother Austin occurred on the football field.

“Austin scored a touchdown, and I blocked for him,” Tyler said.

Paving the way for his brother’s success doesn’t just happen on the football field for Tyler; he’s been an advocate for Austin as long he can remember.

Austin, a 10th grader at Oneonta High School, had his first surgery when he was only five days old. Since then, he has endured 88. Austin suffers from a diaphragmatic hernia, a birth defect in which there is an opening into the diaphragm causing organs to move into the chest cavity. He has also suffered from a bleed on his brain that needed a ventricular atrial shunt.

Yet, through all of the doctor’s visits, hospital stays, and surgeries, Austin has remained true to one of his greatest passions – football.

With his condition, Austin isn’t able to play, but when Tyler began playing football at the age of 6, he wanted his brother to be by his side. Austin never left that position, he has been a football manager from recreation football to junior high to high school.

Oneonta football coach Don Jacobs went one step further once Austin became a high school football manager. Rather than just letting Austin stay on the sidelines, he made it possible for him score a touchdown during Oneonta’s junior high game with Appalachian.

“He had mentioned before how he wished he had the chance to do that,” Tyler said. “Coach made it possible.”

Whether Tyler is blocking for Austin’s touchdown run or Austin is cheering for Tyler on the sidelines, this brotherhood is unique.

“Everyone keeps saying their bond will change as they get older, but it hasn’t happened yet,” said Austin and Tyler’s mother, Crystal. “They still share a bedroom, and its a rare occurrence for them no to be with each other.”

During Austin’s latest surgery in December 2012, Tyler rarely left his brother’s bedside at the hospital. When Austin isn’t feeling well at school, Tyler is the one called for help. When his family needs help convincing Austin to do something, it’s Tyler they turn to.

According to Tyler, that won’t be changing any time soon. Not even college will separate these two.

Tyler is hopeful for a football scholarship and says he would like to attend The University of Alabama or Florida State University. Only one stipulation will come with that possibility.

“If Austin wants to go, I’m going to try to find a way to get him to go,” Tyler said. “Actually, he will be there, I will find a way.”

Tyler says he likes seeing how happy being a part of the team makes Austin.

“I knew he wouldn’t get to do as much as we do physically, but I wanted to be with him so we could experience it together, and him being the manager was the best way to accomplish that,” Tyler said. “Austin has always been a part of my life, and I think I’ve grown up quicker, but always being there for him made me smile knowing I was making him happy.”

Crystal said she loves how the players are so accepting of Austin, whether hugging him or giving him a high-five.

“He always calls them ‘his team,’” Crystal said. “They’re his Redskins.”

Austin has impacted his school in many ways, influencing others to show their appreciation for him.

Football trainer Sarah Clos provided him with a trainer shirt to wear on the sidelines, and referee Connie Butler gave him her own referee shirt during his time as a basketball manager.

Before his surgery last December, Oneonta vice principal Sharon Standridge arranged for a limo to pick Austin and his family up before heading to Logan’s.

“We are so thankful to the community for their support,” Crystal said. “It makes Austin so happy.”

Austin and Tyler are the sons of James and Crystal Studdard and the brothers of Courtney, 20, Faith, 9, and Adam, 7.