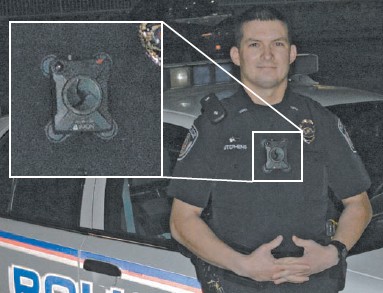 Snead Police Department’s recent acquisition of body cameras makes it the latest in the county to provide officers with the recording devices.

Blount County deputies and investigators have worn the devices for the last two years, according to Operations Officer Tim Kent. Oneonta Police Chief Charles Clifton said all his officers wear body cameras and have done so for several years. Cleveland Police Chief Tim Jones said they have used dash cameras for several years and in the past have used body cameras, but they were less expensive models that proved ineffective.

Blountsville has also had body cameras in the past, but they are old and no longer operational. Chief Robert Grissom, who was appointed in November of last year, had two priorities for his department. The first was replacing the officers’ out of date ballistic vests, which have been ordered. The next item on his list is acquiring body cameras.

The use of automobile dash-mounted cameras and body cameras by law enforcement agencies across the country increased dramatically in the last few years due, in large part, to some controversial encounters between law enforcement and the public.

One such confrontation happened in Ferguson, Mo., in 2014 when Officer Darren Wilson shot and killed Michael Brown. Wilson’s account of the event was he shot in self-defense, but some initial witnesses to the shooting alleged Brown was attempting to surrender. A 2015 U.S. Department of Justice (DOJ) report on the incident discredited those witnesses because they either gave inconsistent statements, recanted their previous statements or the forensic evidence did not support their version of events.

In the end, DOJ ruled prosecution of Wilson was not warranted, but that was months later. In the interim, some media outlets were reporting “eyewitnesses” saying Brown had his “hands up” when shot. Those reports may have led to the riots and civil unrest that occurred. The Ferguson Police Department did not employ cameras at the time, therefore officials had nothing to offer the media and the public other than pleas to be patient while the investigation unfolded. A video of the incident might have tempered the public’s response.

A report by the Community Oriented Police Support (COPS), a division of DOJ, notes cameras offer several benefits to law enforcement agencies, which include “documenting evidence; officer training; preventing and resolving complaints brought by members of the public; and strengthening police transparency, performance, and accountability.” The report goes further in saying an officer’s perspective is recorded.

That is important, says Chief Clifton, because in many cases the “public’s perspective isn’t the same as” a police officer’s. An event might look violent to the untrained citizen, but may in fact “follow the force continuum and be in policy.” He cautioned one should not make a judgment based on only a portion of a video or other evidence, but examine the totality of evidence.

Two studies by police departments involved the use of body cameras in 2012-2013, one in Rialto, Calif., and the other in Mesa, Ariz., produced positive results for proponents of cameras. In Rialto, there was a 60 percent reduction in “use of force incidents” and complaints against officers fell by 88 percent. In Mesa, complaints decreased by 40 percent.

There are issues departments must consider before deploying cameras.

One is the legality of recording others without their consent. In a few states, all persons recorded must be made aware, but not in Alabama. Only one person, in this case, the officer, has to know.

Cost is also a factor, not only the initial price tag of the camera, but also the equipment needed to store the videos that may be required, for evidentiary reasons, to be kept for years. Price ranges for a camera run from about $350 to over $1,000 each. There are grants available, however, there is not enough money to go around, and they usually require matching funds. Last year, DOJ awarded over $20 million to just 106 different agencies in the country for the purpose of implementing its Body Worn Camera Implementation Program.

In February, Alabama’s Department of Economic and Community Affairs (ADECA) issued $470,000 in grants to 41 law enforcement agencies (none in Blount County), but that was for all types of equipment and not limited to cameras. ADECA spokesman Josh Carples said a little over a $1 million in grants for police equipment will be available in FY2018, but it will be late this summer before grant applications will be accepted.

There are detractors who, as expressed by Bob Cherry of the Baltimore PD in 2014, said “the larger philosophical concern is whether these cameras send the wrong message about the trust we place in officers. What does it say about officer professionalism and credibility if the department has to arm every officer with a camera?”

Still, Chief Clifton believes, in terms of complaints, cameras have “saved more officers than they hurt.” Chief Grissom agrees, saying cameras “protect the officers, the department and the public. I fully support the use of cameras. They are good tools to have.”