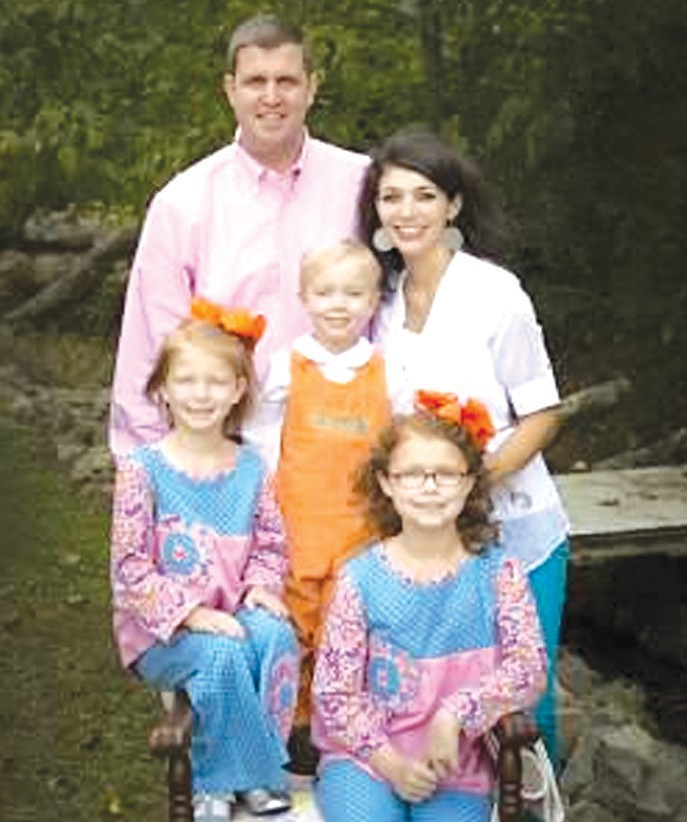 Dr. Stephen Douglas, new superintendent of Oneonta City Schools, with his family – from left, Harper Jane, 6; Jack, 4; wife Lindsey; and Mary Margaret, 10. The children will enter school here within the week, he said.

Oneonta City Board of Education members voted unanimously without discussion Monday night to offer the Oneonta City Schools superintendent job to Dr. Stephen Douglas, principal of Arab High School. School board chairman Don Maples contacted the candidates Monday night with the results, and said that the process of contract negotiation with Douglas would begin immediately. Douglas told The Blount Countian Tuesday that he has accepted the job.

The job offer will carry a salary of $115,000 per year with a $3,000 allowance for moving expenses. Reporting time to be on the job is negotiable, Maples said, but he will negotiate for the earliest date possible before Labor Day.

Douglas, 41, has spent the last seven years in principal and assistant principal jobs in the Arab and Albertville City systems. Before that he taught elementary school in Marshall County, Villa Rica, Ga., and Auburn. Oneonta will be his first superintendent job. He holds a doctorate degree in educational administration from The University of Alabama.

Douglas spoke to The Blount Countian briefly yesterday during an intermission in an in-service session in his current assignment.

“I was really impressed,” he said of his interview visit to Oneonta,“just how proud the faculty and staff was of the school you have here, and with the desire they obviously have to grow and get even better.”

Asked what he would most like parents and citizens to know about him as he comes to Oneonta, he gave this reply:“Two things – first, I will have an open door policy and I want to be accessible to everyone. I want to know what you’re thinking. Second, we want to become a part of this community. My family and I are making efforts to do that just as soon as time allows. We plan for our three children to enter school there later this week.”

Asked when he would be available to report to his new job, he said his hope is to be there by the first day of school (Aug. 13). He said he must be released officially from his current job in order do that.

“Dr. Douglas’s three-year tenure at Arab High School has been very successful,” said John Mullins, superintendent of Arab City Schools. “He has very strong interpersonal skills and is an effective instructional leader. He is the type administrator who can see what steps need to be taken to improve a program or situation, and he has the leadership skills to make needed changes in an inclusive manner. He developed a strong followership in the community and maintained it effectively while he was here. He’s going to do a wonderful job as superintendent in Oneonta.”