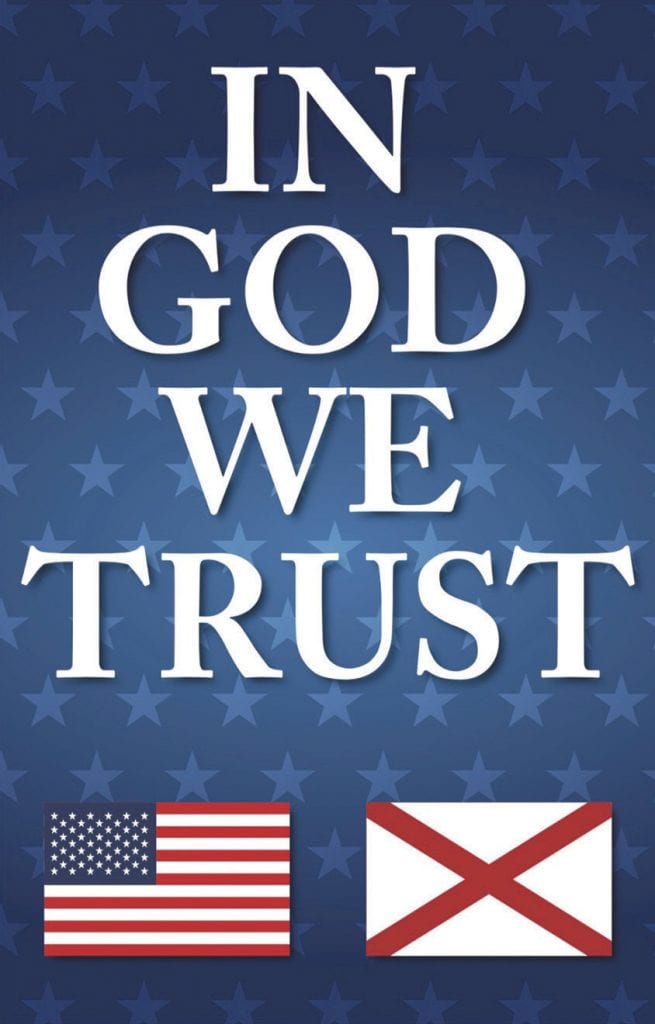 The Blount County Board of Education is considering passage of a resolution of support for state legislation enacted earlier this year permitting display of the national motto “In God We Trust” in public places, including public schools, according to Blount County Schools Superintendent Rodney Green. It will likely be formalized within the next month or two, he said.

The legislation, sponsored by District 34 Rep. David Standridge of Hayden, permits, but does not mandate, such display. Standridge made a presentation on the new law to the Board in early August, without requesting any action on their part, Green said. But the board was interested in the law and wished to offer their support, he said.

Green said that the system’s support of the law will take the form of a resolution favoring its provisions, not a school policy directing that it be implemented within the system, as has been suggested elsewhere.

“This is not about mandating anything, and it’s not about being first to do something, or any of that,” Green said. “What the board wanted to do was indicate its support of state law on this, and it asked me to get the counsel of our attorneys for it to consider before it makes a decision going forward.

“If the board passes the resolution, we’ll get word out to teachers about the law and the resolution letting them know that the “In God We Trust” sign may be displayed in schools, according to state law. Of course, we must continue to respect the separation of church and state concept, but it will give teachers the option of posting the motto and calling attention to it at their discretion.” He added that any enhancement of the motto itself, such as attaching other religious messages to it, would not be within the scope of their discretion.

“You know, kids learn respect and love for each other at home and at school, and that adds to their development and how we get along with each other as adults and citizens. It starts with learning that there is a higher authority to whom we all owe homage. That motto is a unifying theme. It teaches patriotism, it teaches respect for authority – for teachers, for government officials, for law enforcement – at a time when schools themselves are innocent targets of violence. It’s a simple and powerful statement that gives everyone – kids, parents, and others – reassurance that there’s something we all agree on and abide by.”