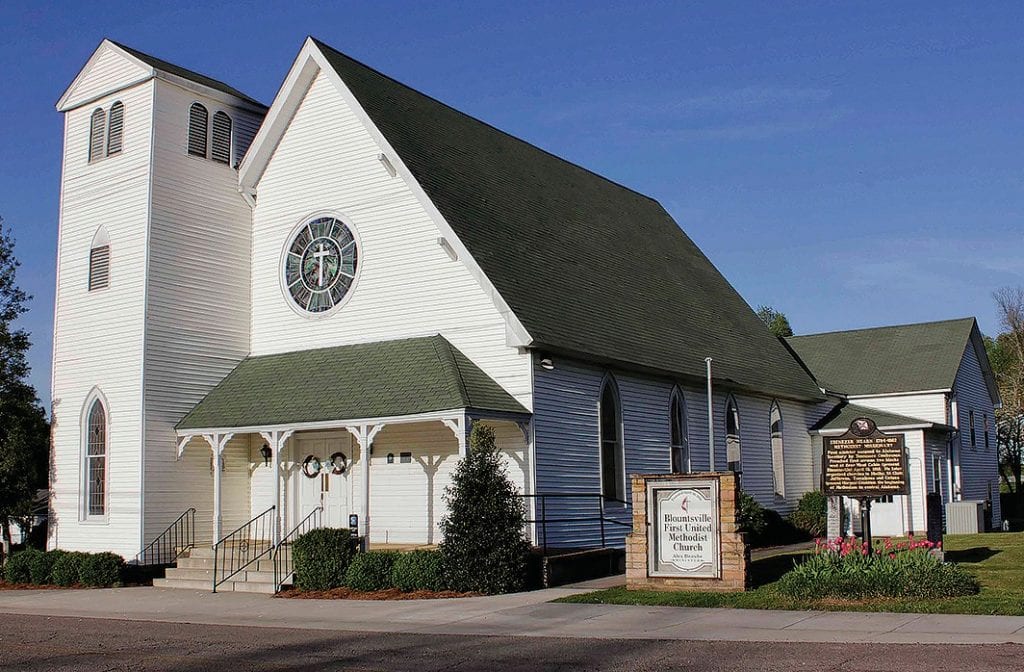 Blountsville United Methodist Church will celebrate it’s 200th anniversary this Sunday, April 15, harkening back to its roots in frontier times. In its main service at 11 a.m., Bishop of the North Alabama Conference of the United Methodist Church Debra Wallace-Padgett will deliver the sermon. A barbecue and pot luck luncheon will follow the service, and an afternoon singing will begin at or about 2 p.m. Recreation and games for children will be provided during the afternoon. The public is invited to share the historic celebration. 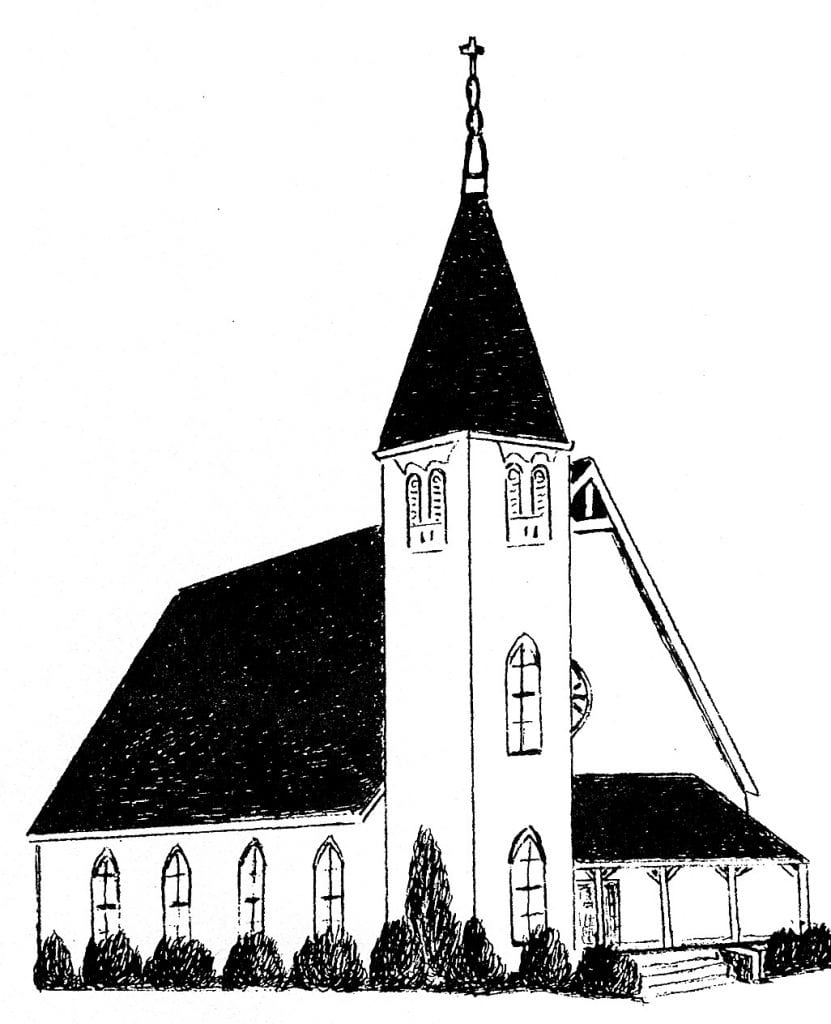 Blountsville Methodist Church as it looked before 1930, when the high steeple was removed.

First settled by two frontiersmen from Tennessee in 1816, the settlement was named Bear Meat Cabin, after the Creek/ Cherokee Indian who lived there. It first appeared on an early map in 1819 as Wassausey, apparently the Indian’s name in his native tongue, which translated to “Bear Meat.” By 1820, when it became the county seat of the recently-downsized Blount County, it had become Blountsville, and in 1827, it was incorporated under that name.

So, you see, Blountsville Methodist Church, founded April 18, 1818, was a charter member of the community going back to early settlement days. Was it the first church in the county? Perhaps, perhaps not. At least three more were started about the same time. Was it first in what became the town of Blountsville? Almost certainly.

Just to set the scene, recall what was happening in 1818. The Creek Indians had been dispossessed of their lands covering much of Alabama – but not removed from them. Removal would not be complete until more than a decade later. During the interim, white settlers and Indians occupied the area and lived side by side in scattered wilderness and lightly settled places. But white settlers by the thousands were migrating into the area, caught up in “Alabama fever” as the territory was opened to settlement following the Creek defeat at the Battle of Horseshoe Bend in 1814. The changing names of today’s Blountsville was a sign of those sea-changing times.

Blountsville Methodist Church was founded in April of 1818 by Ebenezer Hearn. He was sent by the Tennessee Conference of the Methodist Church to organize churches in the northern area of the recently-opened Alabama territory. He preached his first sermon at Bear Meat Cabin. The first church was a log building located near the present church. It had no steeple, and only one sizable room, with rough log benches – no backs. From all accounts, that building survived until 1886, when the present church was built.

Following a fundraising campaign in 1885, the present church was built in 1886 by Otto Puls, a German builder who had come to this country to help rebuild following the great fire of 1871 in Chicago. He subsequently came south, building several buildings in both Garden City and Blountsville. The original building had a high steeple, removed in 1930 because it was dangerous to maintain.

When The Methodist Church and the Evangelical United Brethren Church united in 1968 to form The United Methodist Church, the table was sent to Birmingham-Southern College to be used again in the signing ceremony. Then it returned to Blountsville where it stands before the pulpit today.

Back to the present

Having a venerable past is fascinating, but the church’s present and future is more so, according to pastor Alex Beaube, who has served the congregation for seven years.

Blountsville United Methodist Church’s current membership is about 250, with Sunday morning worship attendance for combined youth and traditional services of about 150 to 170. It has a contemporary service at 8:30 a.m. each Sunday in the fellowship hall across the street from the church, and a traditional service in the church sanctuary at 11 a.m.

Its outreach programs, Beaube said, include Wonderful Wednesdays, 5:30 p.m. to 7:30 p.m. weekly for children and youth (in the fellowship hall), a food pantry providing some 3,000 pounds of food monthly to those who need it, local missions of assistance to the elderly and other disadvantaged individuals, and foreign missions, with a church in Cuba as a special project. Mission trips to assist other churches with maintenance, repair, and other needs – both domestic and foreign – are a continuing aspect of outreach, he added. He emphasized youth programs, including a summer “beach reach,” as a special focus for the church. Other groups within the church have their own outreach projects and concerns, he said.

“It is my distinct honor to stand on the shoulders of all the pastors and parishioners who have walked this road before me for the last 200 years,” Beaube said. “This great heritage of faith is evident in our church still today. From the church sanctuary to the altar rail, I can feel the great cloud of witnesses looking down upon us….I look forward to the next years of ministry here, as we entertain the idea of expansion of our facilities, our continued growth in our ministries, and spreading God’s grace throughout the world.”