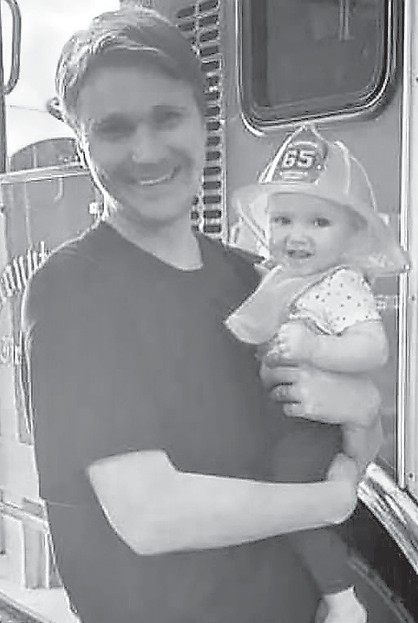 As Blountsville firefighter Jody Cottingham (pictured below with his daughter) headed home from his fulltime job on Nov. 12, he was looking forward to spending time with his family and doing some of the mundane chores that keep people busy on weekends. Cottingham was traveling with normal traffic on I-65 near the Gardendale exit when he came upon a car stopped on the interstate. Because it was too late to stop, Cottingham rear-ended the car.

The accident caused his airbag to deploy, breaking a rib, a few toes, and his left clavicle completely in half. Initially Cottingham was told recovery time would be about six to eight weeks. After a follow-up visit this week, the collar bone does not appear to be healing properly, and Cottingham will likely face surgery to repair it. He will be following up with an orthopedic surgeon in a couple of weeks. Surgery will tack on several more weeks of recovery time.

Cottingham’s car was totaled, and he has since found out that his medical insurance had lapsed. Cottingham also had to be unenrolled from the last block of rookie firefighter school; he will not able to complete the required physical assignments to become fully certified. Cottingham is thankful that he has already passed three of the four mandated classes and will have to take only the last class over. Once healed, that should take about one month’s time.

Even though Cottingham lives in Cullman, he is a Blountsville firefighter and loves serving the community. He likes the fact that Blountsville Fire has many training opportunities to better prepare first responders for emergencies. With his injuries, Cottingham cannot assist on medical calls at this time. He does look forward to returning as soon as possible.

Cottingham is facing more than $30,000 in uncovered medical bills, expense of replacing a car, and figuring out how to pay routine monthly bills. It is unclear how much higher the medical bills will soar with this impending surgery. Meeting these financial challenges is going to be difficult, but Cottingham is trying to remain optimistic.

To help ease some of the financial burden over the next few months, a fellow Blountsville firefighter has created a GoFund me account on Facebook. Although the desired goal is $50,000, Cottingham is appreciative for any assistance. He just wants to be able to pay his bills and support his wife and 1-year-old baby girl, along with his 9-year-old son who has visitation privileges with his father.

Life has been temporarily changed for the Cottingham family, but Jody is glad to be alive. Because he is unable to physically pick up anything at this time, holding his baby girl is out of the question. He hates to have to tell her “no” when she asks to be held. Cottingham is taking it one day at a time and praying things will somehow work out.

Blountsville Fire Chief Sam Johnson said that Cottingham is a true asset to the Blountsville Fire Department and the Blountsville community. His time and efforts to help serve the community have not gone unnoticed. They, too, look forward to having him back on board once he has recovered. Anyone wanting to make a contribution can visit the GoFund me page Firefighter in Need on Facebook.