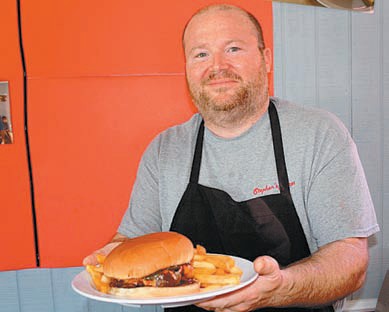 Here’s the 411 (OK, information)…an 8-ounce patty (that’s half a pound) of ground chuck, slices of American and Swiss cheese, grilled onions and jalapeños with homemade barbecue sauce, all between a soft, toasted bun. It’s a flavor explosion with a snappy kick of jalapeño at the end. It comes with a side of choice – onion rings, fries or homemade chips – and it’s just $6.99 plus tax.

The Southwest beat out some stiff competition, namely the bacon cheeseburger from D&R Barbecue (south of Locust Fork on Ala 79), and it’s definitely a worthy champion.

Stephen says he normally sells about four or five Southwest Burgers per day – as opposed to say 25 to 30 regular burgers – but by Monday perhaps word had gotten out…he sold 20.