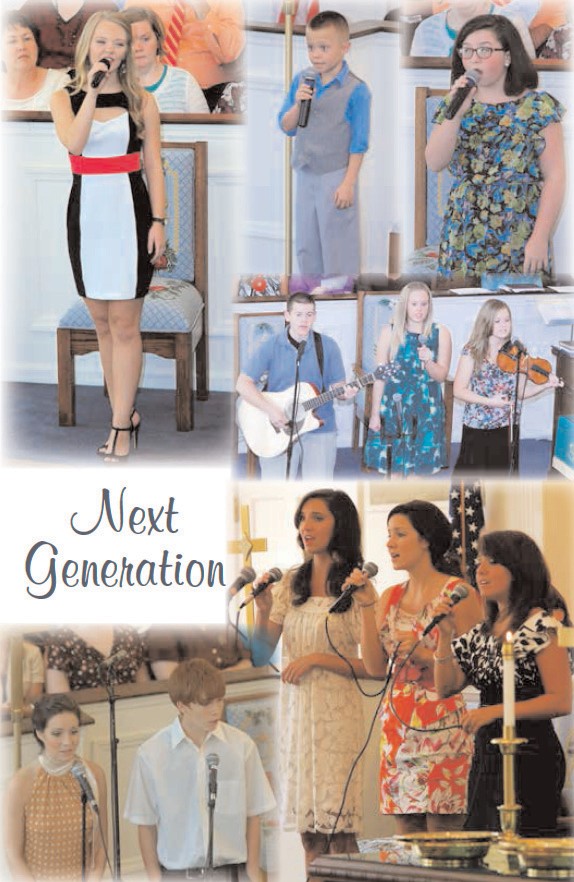 To young people and others like these is left the burden to carry the gospel singing tradition into the future as the current generation of singers ages. From top left, clockwise: Morgan Green; John Martin; Kenzie Cox; the Daily family: Houston, Savannah (Walker), and Madison; the Beauty Queen Trio: Stephanie Shelton, Erica Gholson, Jordan Ratliff; and Erica and Stephen Gholson.

The event will feature a 48-page illustrated, commemorative songbook to be given to all attending. Along with photos of past singings, the book contains all the songs the choir will perform at this year’s concert, which is a reprise of 21 all-time favorite songs performed each third Sunday in August over the last nine years.

As in years past, the concert will consist of several sets of mainly old-time gospel songs by the full choir, interspersed with songs by featured ensembles.

Some of the classics from years past include “O The Glory Did Roll,”“Turn Your Radio On,”“Where the Shades of Love Lie Deep,”“What Sins Are You Talking About?” “Come and Meet Me,”“Heaven’s Jubilee,” and more, along with beloved hymns.

Featured appearances include area family ensembles from past years: the Green family, the Burtram family, the Thomas/Ratliff family, and the Gholsons. Also featured are the Shaped Note Singers Ensemble and solos by Katrinka Bryant, Danny Gunter, and Mark Green.

Initially created and directed ever since by Chris Green, the concert has included the most revered songs from the gospel canon of the past century, sung by many of those who have grown up and grown old polishing their delivery of fondly-remembered words and musical figures from the old songbooks used in country churches around the county.

The choir itself numbers 50-odd singers from more than 20 Blount County churches, including a handful from surrounding counties. It reflects the influence of the times as do many area choirs. It’s an older group of singers, many if not most of whom sung in the original concert in 2006, and several of whom sang in the funeral service that resulted in the choir’s creation.

Average age for tenors and basses (men) in the choir is in the 60s; average age of sopranos and altos (women) is slightly less, in the 50s. Notwithstanding their ages, Green says replacements are not a concern for the forseeable future. There are still more singers who would like to join than there are openings from attrition, he said.

Still, the choir’s sustained emphasis over the years on including young singers, especially in its featured ensembles, assumes great importance in continuing the gospel tradition here.

The gospel choir concert had its inception 10 years ago in the funeral service of Tom Vaughan, a gospel music lover and member of Lester Memorial United Methodist Church. A group of singers assembled by Green for that service, at Vaughan’s widow’s request, made such an impression that he was asked by the community to repeat and expand the service into a concert. Lester Memorial’s music director Beverly Ellis, volunteered the church for the event. Ten years later, the concert has become a legacy event in the county, and at the church where it was born.

“It’s been a tremendous delight and honor to have directed this group for the last 10 years,” Green said.“It’s been a lot of work, but it’s been a labor of love. I hope it will continue for generations to come. I will continue as director as long as I’m able, and will be delighted to help someone else take the reins when the time comes. We want to keep on singing until the last trumpet sounds.”

Ellis says the church welcomes gospel music lovers of all denominations to the concert.