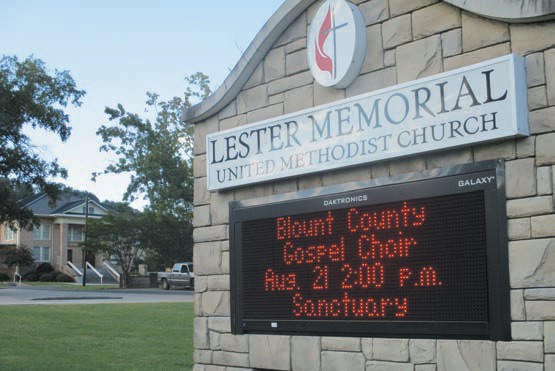 The choir is essentially the same choir that first performed 11 years ago. The venue is the same. And the membership is virtually the same. Only four members have left the choir, all by urgent call to the Great Beyond, of which the choir so earnestly sings.

The songs, however, are not the same. According to director Chris Green, who first assembled the choir in 2006, the group has yet to repeat a song, among the 140 or more favorites sung over the years.

There’s usually a special reason for some (maybe most) of the songs chosen each year. This year, two featured songs were written by Vep Ellis, a prolific gospel songwriter born in Oneonta in 1917, who went on to gospel fame during his 50-year career of preaching (Church of God), songwriting, performing, recording, and publishing.

Ellis served as music director and crusade soloist for Oral Roberts ministries in Tulsa, Okla., and recorded more than 200 gospel songs during the 1960s, according to Green. He died in 1988 in Tulsa, where he is buried.

Two of his songs included in the program this year are “When He Calls Me I’ll Fly Away” and “I Know He Heard My Prayer.”

Gospel classics by other songwriters include “Everybody Will Be Happy Over There,” “Where the Milk and Honey Flow,” and “Hallelujah, I’m Going Home.” Featured soloists are Benny Green, Jennifer Horton, and Gregg Armstrong. Special guests

Four special groups will perform at intervals throughout the concert. The Pine Grove Trio, featuring Rodney Green, will perform “God on the Mountain.” The Union Hill Quartet will sing “I Call It Home” in a special tribute to Pat Wadsworth, gospel choir piano accompanyist who will miss her first concert since its beginning. She passed away earlier this summer. The unnamed men’s quartet that has convened annually in recent years just for this concert will sing “Glory Road,” Chris Green officiating at the piano. Randy Burtram will close the concert with his traditional solo.

Lester Memorial United Methodist has hosted the concert since it’s inception. Lester Memorial choir director Beverly Ellis, who played a role in the events at the time, describes the circumstances that led to a legacy.

“Everyone who knew Sylvia and Don Fowler remembers them as a goal-oriented couple,” Ellis said. “Not knowing them well 11 years ago, I didn’t realize what a force they could be, but we have them to thank for this wonderful tradition.

“It started with the funeral service of Tom Vaughan, another Lester Memorial member. Sylvia called me soon after the funeral to tell me that Chris Green had organized an ‘amazing’ choir that sang at the funeral, and that we had to have them sing at Lester Memorial. I was not raised on singings or gospel music and I didn’t know Chris Green, so I hesitated. She talked to me several more times to encourage me to get busy. Then she called and said that she had talked to Chris and he had agreed to do it. All he needed was an invitation.

“So, I called Chris and invited him, he enlarged the funeral ensemble and expanded the repertoire, and the rest is history. Don got in on things a few years later when he ordered the fans we gave out at a subsequent singing. Maybe the air conditioning wasn’t quite up to the challenge the previous year!”

“Everyone is invited to enjoy the wonderful music Sunday at 2 p.m. in the Lester Memorial UMC sanctuary. We are dedicating this singing to the memory of Sylvia and Don Fowler and to Pat Wadsworth, who accompanied the choir for the first 10 years.”