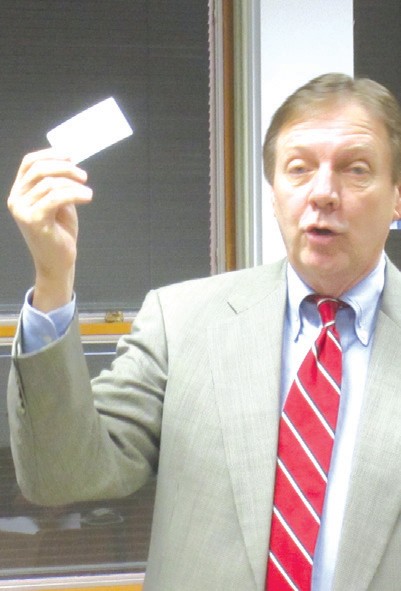 The Blount County Commission’s first business meeting for 2013 was an unusually busy one, both for length and significance. Key highlights included votes to advertise for a county administrator to fill that job vacancy, accepting road paving schedules from three districts, requests to the county legislative delegation for assistance in passing three local laws, and other resolutions.

Operating without a county administrator since early last August, and in the wake of the Blount County Merit Board’s decision up-holding the firing of former county administrator Ralph Mitchell, the commission authorized advertising to fill that position. The motion passed on a tie vote of the commissioners, with Commission Chairman Chris Green breaking the tie in favor of placing the advertisement for the merit position. Voting against the motion were District 1 Commissioner Allen Armstrong and District 2 Commissioner Carthal Self. After the meeting Armstrong said he did not oppose hiring a new administrator – he agreed one is needed – but he opposed hiring the administrator as a merit system employee instead of as a contract services provider. He said most counties in the state use a contract employee in the county administrator job. The amended motion offered by District 3 Commissioner Dean Calvert specified that the job was to be filled as a merit system position.

In a development requiring no commission action, a new prescription discount card providing up to 75 percent in savings on prescriptions will be distributed this week to pharmacies and county buildings around the county. The program, sponsored by Coast 2 Coast Rx, was approved for use in the county last August, but is only now being implemented. The new discount card replaces the previous card made available under the commission’s auspices. It also provides improved coverage. To qualify, Blount County citizens can find a supply of the cards at their local pharmacy, enter their 10-digit telephone number on the card and present it to their pharmacist.

The commission approved road-paving schedules submitted by districts 2, 3, and 4 for the 2013 paving season beginning in the spring, with specific dates subject to weather conditions. Armstrong said the paving schedule for District 1 will be submitted later when he knows which ATRIP projects submitted for his district have been accepted. If one or more projects covered by the state/federal funding program are authorized, it will free up more district funds to be used on local paving projects.The Blount Countian will cover district paving schedules later in a separate article.

The commission also approved a resolution requesting the state legislative delegation to introduce a local law giving it the authority to pass an ordinance imposing restrictions on use of covered bridges and fines on those violating them in order to ensure public safety and preserve a valuable part of the county’s heritage. The request was given impetus by significant damage to both bridges – Easley and Swann – within days of their having been opened to vehicular traffic after being closed since 2009. Repairs on the third bridge – Horton Mill – are expected to be completed by the end of February, with its reopening soon after. It had been subject to extensive damage by vandals shortly before it was closed to traffic in 2009. Other resolutions:

•requesting the Blount County legislative delegation pass a local law providing for a $5 driver’s license issuance fee for out-of-county license purchases and renewals; the measure is designed to discourage out-ofcounty residents from coming to Blount County, causing long lines and waiting times for local residents; a similar local bill last year failed to pass in the Legislature; $4 of the fee would go to the county general fund; $1 of the fee would go to support Blount County volunteer fire and rescue departments.

•committing the required 20-percent match to a Recreational Trails Program grant for Palisades Park to complete a $30,000 project to upgrade and repair damaged hiking trails; matching funds will be provided from Palisades Park operating proceeds.

•committing the required 50-percent match to a Land and Water Conservation grant to Palisades Park for a $40,000 project to renovate a natural stone amphitheater at the park; matching funds will be provided from Palisades Park operating proceeds; in a related action, the commission authorized the chairman to execute a contract for renovation of the amphitheater.

•vacating right-of-way for a section of Acton Bend Circle, having held a public hearing and carried out other necessary steps to surrender the right-of-way; the road is located off county road 5, west of Ricetown. In other business, the commission:

•approved a memorandum of understanding allowing local municipalities to participate in the county contract for debris removal services, if they wish to do so; authorized chairman to execute contract.

•agreed to request former District 4 Commissioner Waymon Pitts to assist on a volunteer basis with implementation of polling location improvements in connection with the Handicap Accessibility Voting Act (HAVA) grant.

•authorized the commission chairman to identify suitable office space in a county building to be made available for use when needed by members of the Blount County state legislative delegation and federal legislators.

•approved Community Services Fund grant for Appalachian School in the amount of $5,475.75, the amount remaining in the account, at the request of former State Rep. Elwyn Thomas, who established the fund.

•appointed District 4 Commissioner Gary Stricklin to represent the Blount County Commission with the Metropolitan Planning Organization, and authorized him to appoint proxies as needed.

•appointed District 1 Commissioner Allen Armstrong to represent the Blount County Transportation Program with the Metropolitan Planning Organization, and authorized him to appoint proxies as needed.

•declared four Blount County Transportation buses surplus and authorized the chairman to sell them; three are 2005 models, one is a 2006 model

•postponed indefinitely action on an item of old business – the matter of going forward with a program to update and upgrade all energy usage systems in county buildings; pending is selection of a consultant to evaluate proposals submitted by three energy consultants on the multi-year project and the evaluation process itself.

•received a status report from head librarian Gail Sheldon of the Oneonta Public Library on library usage (12,000 to 13,000 items in circulation in an average month) and innovative and little-known services now provided by the library to support math and science learning, among other subjects. Sheldon said she would provide the commission with a similar report each month “to show that we’re trying to spend wisely the money the commission appropriates each year for the library and to accommodate as many residents in as many ways as we can.”

•$1,186.79 to the maintenance department from Progress Rail Engineering items

At the recommendation of county engineer Winston Sitton, the commission approved establishing a maximum speed limit of 20 m.p.h. on Moman Road in District 2.

In an update on Alabama Transportation Rehabilitation and Improvement Program (ATRIP) projects in progress, Sitton reported that one project, county road 27, has been approved for resurfacing and that applications for four other county roads have been submitted for approval: county roads 8, 9, 26, and 29.

On covered bridge matters, he told the commission that although progress has slowed somewhat on final repairs to Horton Mill Bridge, he still expects the contractor to complete the project by the end of February. Executive session

At the conclusion of the meeting agenda, county attorney Jeff Sherrer requested that the commission enter executive session to discuss pending litigation. Attending the session with commissioners were Tom Prickett, local counsel for the county on the lawsuit filed against Blount County and Allen Armstrong concerning use of county roads by TD Farms (now River Bend Plantation), and other parties having logging interests in the county. Also present was Craig Dilliard of the Webb and Ealy law firm in Montgomery, lead counsel for the county on the same matter.

All commissioners and the commission chairman were present at the Monday business meeting.

The next commission work session will be Thursday, Feb. 7, at 9 a.m. The next monthly business meeting will be Monday, Feb. 11, at 9 a.m. Both will be in the commission boardroom at the courthouse.