‘No-kill’ vs. ‘low-kill’: agreement on policy direction but bumps in the road remain 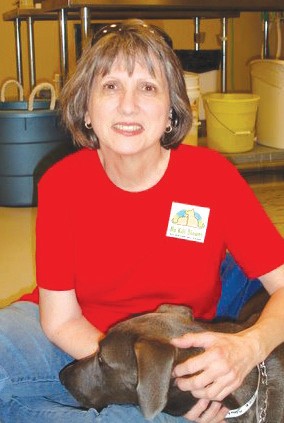 Jo Chamblee, spokesperson for No- Kill Blount, and friend.

The Animal Adoption Center of Blount County – often called the “animal shelter” – is not now a “No-Kill” facility.

About 68 percent of animals taken there in 2009 and 2010 were killed. Statistics for the first half of 2011 suggest the kill percentage may drop somewhat this year.

However, the shelter took in 553 animals in June, its highest monthly intake since its inception. Some attribute that increase to the public’s perception that the county policy has changed, and that all or most animals taken to the shelter will be adopted.

“But that’s not the case,” said Jo Chamblee, spokesperson for No-Kill Blount County, a group spearheading a movement to change county animal shelter policy and practice.

County administrator Ralph Mitchell will prepare recommendation for the transition of the Animal Adoption Center of Blount County to a ‘minimum-kill’ facility.

The county administration, according to several of its members, is sympathetic to the no-kill point of view. It has been asked to pass a resolution to adopt the no-kill model at the county animal shelter, but so far it has not done so.

County administrator Ralph Mitchell has been charged to present his own recommendation to the Blount County Commission later this year. The recommendation will lay out steps the county should follow to reduce the kill rate at the animal shelter and will attempt to project both the initial costs and future savings associated with the program, which is expected to save the county significant dollars in the next three to five years as parts of the multifaceted approach involved are implemented.

The commission will evaluate the recommendation during budget hearings in September to decide what level of funding to allocate to the program for the coming fiscal year. The funding will determine the number of spay/neuter procedures the county will help fund and could be based on providing the service free to people who adopt animals or providing it at a substantially discounted rate. Mitchell says ‘mimium kill’

“Here’s what I want to emphasize about this discussion,” said Mitchell. “The whole thing is about the animals. It’s not about what we call it, whether it’s “no-kill” or “minimum kill,” which is what I call it. It’s really about what we do.

“And what we are going to do is concentrate on putting down as few animals as possible. We do that by developing a strong spay/neuter program, limiting the intake of animals at the shelter, and increasing the number of animals adopted.

“We can’t do that overnight because the program is cumulative. The more animals you spay and neuter, the more you limit the puppies and kittens and dogs and cats that are brought in to the shelter, but it takes time for that process to take effect. I think we’re going to see a three- to five-year period to get there.

“We want to get to a point where we’re taking in a lot fewer animals and adoping out a majority of what we’re taking in, and I don’t want to quantify those terms to give someone a target to shoot at. But we don’t want to put these animals down. I would like to see that necessity minimized as much as possible, and spay/neuter is the key. It breaks my heart to put animals down. I am passionate about making this work.”

Mitchell said that some steps have already been taken. The number of animals taken in at the shelter was reduced from 4305 in 2009 to 3562 in 2010. The reduction is attributed to aggressive spay/neuter programs launched in 2010 including the “Fix Your Mama” program; 743 fewer animals were taken in and 511 fewer (a total of 2421) were killed as a result.

Mitchell said greater emphasis on promoting adoptions has resulted in opening the shelter (by appointment only) on Sunday afternoons to allow more citizens to visit the adoption center.

Asked whether the commission would pass the no-kill resolution requested by animal advocates, Mitchell said: “That’s up to the commissioners, but it’s probably not going to happen. But the principles of the no-kill philosophy – we’re already starting to put those into effect.” ‘Can’t kill your way out’ of problem

No-Kill Blount has petitioned the county commission to make the transition to the no-kill model and to fund a countywide spay/neuter to assist low-income residents. According to spokesperson Chamblee, most abandoned and unaltered animals and animals turned in to the shelter come from low income households. Furthermore, for every animal that is spayed or neutered, she said, $3.15 is saved in recurring costs to the animal shelter.

“You can’t kill your way out of an animal-overpopulation problem. You have to reduce the number of unwanted animals out there, and the key to that is an aggressive, community-wide, spay/neuter program,” Chamblee said.

“It’s not as simple as pushing for a no-kill shelter. We’ve got to have a no-kill community – businesses, schools, churches, civic clubs, county and city governments – everybody’s got to pitch in. This is a big problem, and it requires a big solution,” she added.

Chamblee makes the point further: it takes a lot of work by a lot of people. Below are some of the elements needed in a successful no-kill program. Blount County already has some of these elements in place, according to Chamblee, but they need to be expanded.

Feral cat program. Cats that have gone wild are trapped, neutered, and returned to the area where they were caught.

Foster care. Individuals act as a placement option to expand the capacity of shelters and rescue groups by taking in and rehabilitating sick and injured animals or simply by relieving crowding at other locations.

Pet retention. Some of the reasons people surrender animals to shelters are unavoidable, but others can be prevented if shelters or other volunteers are willing to work with people to help them solve the problems.

Volunteers. Volunteers make the difference between success and failure of a no-kill program. There is never enough staff, never enough dollars, to meet all the needs with paid workers. Volunteers enable efforts to be leveraged at many points in the system: rescue groups, foster care, fundraising, and shelter operations.

Proactive redemptions. Too little effort is made to identify owners of lost animals allowing a significant reduction in shelter population simply by restoring them to owners who want them back. Significant improvement is possible through a more proactive approach.

Both sides seem to recognize that a no-kill policy doesn’t literally mean no animals would ever be put down. There will always be a certain number of vicious dogs, aggressive animals, and animals with untreatable medical conditions that cannot be saved.

No-Kill Blount thinks that number would be in the neighborhood of 10 percent of animals turned in to the shelter. The county administration prefers not to commit itself to a certain target number, but to work diligently toward reducing the kill rate and the number of animals brought to the shelter and increasing the number of adoptions.

What would the two sides like to see happen next?

Jo Chamblee: “We want to be invited in to help carry out the changes that are necessary. So far, we haven’t been. We can provide volunteers to help meet many different needs. For example, we’d like to set up a help line – a phone number people could call that we would man to try to give them help with any problem they have with their pets.”

Ralph Mitchell: “I would like the animal advocates to step up and provide more help – specifically with the matter of transporting animals back and forth between here and the spay/neuter clinic in Irondale. So far, they’ve tried to help us with that, but it hasn’t worked out too well so far.” Pitts: approaching ‘worst financial crunch’

The Blount Countian spoke to District 4 Commissioner Waymon Pitts to get an indication of a commissioner’s point of view on the matter. Pitts covered several aspects of the subject. His comments are summarized here.

“First, you’ll have animals that aren’t going to be adopted – not just sick and vicious animals, but older ones and animals that just aren’t attractive.

“The animal control officer is doing an excellent job, but we’re still having a lot of dogs dropped, especially along the southern county line. These aren’t all Blount County animals.

“And lastly, next year, we’re going to be facing the worst financial crunch since I’ve been in office. I think we’re willing to spend some money to get to a limited-kill situation and I’d love to see it, but the question is going to be how much money is needed and where’s it going to come from.

“Here’s the real problem as I see it: I think anybody who’s sorry enough to throw out an animal on the side of the road is too sorry to take the trouble to get them spayed and taken care of. The animal group has done a good job selling us the concept, now they have to help us determine how to do it – they’ve got the expertise and resources for that – and that’s going to be the hard part.”