Blalock beats the drum for justice 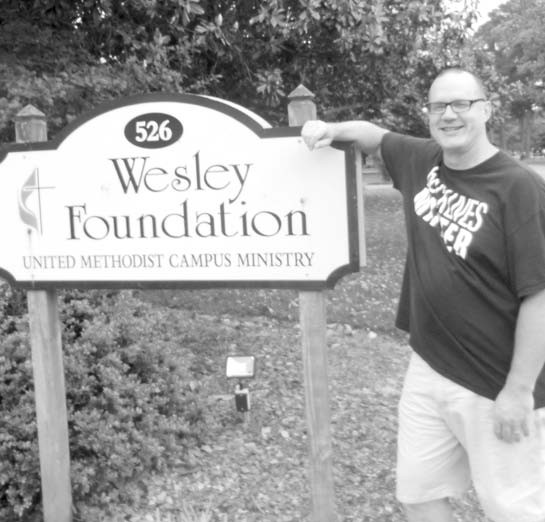 Serving often as a billboard for his views, William and Mary Campus Wesleyan Minister Max Blalock sports his ‘Black Lives Matter’ shirt outside the foundation house at the Williamsburg campus.

Oneonta native Max Blalock, Wesleyan Campus minister at the College of William and Mary, holds a tender heart for those who have suffered historic marginalization in American society. He has aligned with movements seeking to welcome all into the tent he envisions encompassing God’s human creations.

Blalock posts often on his Facebook account and accepts regular invitations to address audiences on topics related to his views. During a recent college visit, Blalock spoke of the Wesleyan community’s previous 18-month journey to develop a mission statement at the Williamsburg campus. He began by noting his past disdain for mission statements but explained that outlook changed in this process.

That statement appears to address much of what Blalock and his fellowship community share. It reads: “We believe God creates a human family; every person is a recipient of God’s grace; and God intends for us to be a community that embodies love, reconciliation, and justice. Thus, we welcome people of all races, nationalities, sexual orientations, gender identities, faiths, and theological identities. Through following Jesus, we embrace God’s radical hospitality towards all.”

The Oneonta High School “Mr. Everything” (valedictorian, class president, quarterback, school musical lead, Best All-Around and many other titles) views Oneonta City School and his church (Lester Memorial United Methodist) as the foundations for his beliefs.

Of those, he relates: “[School] was the only place in the community where we experienced something approaching equality and equity of relationships and responsibilities. Our classes, our athletic teams, and our meals were the most diverse experiences that I had living in Oneonta….

“American history class my junior year changed my life. I had never been given the opportunity to engage history the way that I did in that class. I was invited to engage my whole self into the study of history. What we learned and the way that it was taught not only prepared me for further study in college and seminary, but continues to challenge me to engage history and faith in new and exciting ways…

“I still remember… one of the exam questions asked us to imagine what it was like to be a Japanese citizen after the dropping of the atomic bombs on Hiroshima and Nagasaki. I had never been asked to empathize with ‘the enemy,’ much less use my imagination and empathy in a history class. I have never been the same since.

“Lester Memorial UMC was always a sanctuary of sorts, whether it was in worship, the youth group, the youth choir, or simply being with the folks there. It was a community where we knew that we didn’t all believe the same way, and that was OK. We were challenged to listen and learn from each other. We were also deeply committed to compassion and community with one another.

“That is the community that journeyed with me through Daddy dying the summer between my junior and senior year in high school. Furthermore, the times that I returned as an adult to serve at Lester Memorial were invaluable to me and my family. The journey with mother as she became more and more disabled with Alzheimer’s would have been unimaginably more difficult if not for the community at Lester Memorial; and year’s later at her death, what a celebration of her life we had in the sanctuary.

“In Oneonta, there are people there who are, and always will be, family. There are so many people who raised me, taught me, encouraged me, wept with me, cared for me and my mom, and who continue to cheer for me and encourage me and pray for me, even though I haven’t lived there in 17 years.”

A National Merit Scholarship finalist, Blalock graduated from Birmingham- Southern College. He entered medical school at UAB before concluding that was not what he wanted. He has said of that direction that many had told him because he had enjoyed such academic success he was destined to be a doctor.

He held various positions in education and other fields surrounding his obtaining a master of divinity degree from California’s Claremont School of Theology. He says he chose Claremont to view perspectives which might differ from those of his Southern Bible Belt past.

He served Lester as associate pastor from 1997-2000 and shepherded other North Alabama churches between 2005 and 2010. Prior to William and Mary, Blalock served as campus minister at Union College in Barbourville, Ky., (2000-03) and the University of Southern Mississippi (2003-05).

Following his marriage to Becky Trask in 2006, the couple welcomed son James in 2007, moved to Williamsburg in 2010, and added son Daniel to the family in 2011. Blalock refers to his Wesley Foundation position as his “dream job” but declines to say he would never leave it. “I know that life has a way of taking twists and turns that we don’t expect for ourselves and those we love. I have to have the faith and courage to do what is best for my family, for others, and for me, even if it’s not what I had planned.”

As for the “dream” nature of the job, Blalock reports, “I get the privilege of partnering with and learning from students each and every day.” He notes his best friend is a local rabbi originally from Brooklyn and that the group with whom the Wesleyan Foundation works closest is the Muslim Student Association. He finds the stimulation and diversity invigorating.

Blalock has strong feelings when asked of religion and politics. “They’re inseparable…. I support full equality in our nation and our laws for everyone, particularly all folks who are immigrants, LGBTQIA and African-Americans. That all flows from the teachings of Jesus, ‘Love your neighbor as yourself. Love your enemies.'”

He proceeds to refer to the parables of the Good Samaritan and the Sheep and the Goats, contending Paul goes further in Galatians writing, “For the entire law is fulfilled in keeping this one command: ‘Love your neighbor as yourself.'” In a condensed version of some of Blalock’s extended written response to proposed questions he writes, “I view it as my responsibility as a person, a Christian and a pastor to speak out and act to try and make our nation, our communities, and our world more just, loving, and compassionate.”

Blalock’s United Methodists have struggled recently with theological questions revolving around openness to homosexual marriages and leadership. Of that he notes, “I do believe that there will be some kind of split, primarily because the folks who prefer the status quo of excluding and marginalizing folks who are LGBTQIA are already making plans to split if the direction of the church doesn’t go in the way that they wish. The UMC is the only mainline protestant denomination that doesn’t welcome [LGBTQIA] fully into the life and leadership of the church….

“Much of the talk about this is about biblical interpretation, and I believe that is primarily a cover story for people’s fear and prejudice. As a denomination, we allow divorce, even though Jesus speaks out forcefully against [it] except for the cause of marital infidelity.

“We celebrate the ordination of women as pastors and have for over 60 years, even though the Bible clearly says women are to keep silent in church. We don’t still support slavery, even though in every case where slavery is discussed it is never spoken of in the Bible as in need of being abolished.”

Blalock closes that topic with, “Doesn’t the witness of Jesus and the love and grace of God compel us to welcome and celebrate everyone and take stands in the name of compassion and community, not in favor of condemnation, exclusion, and judgment?”