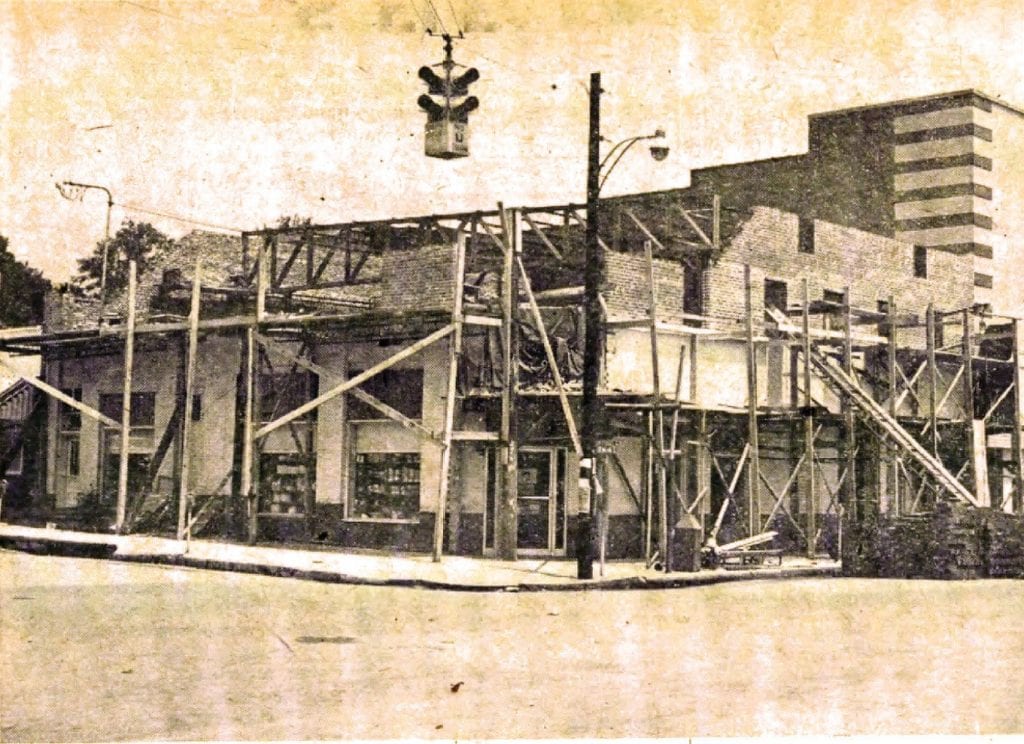 ‘Nearing completion is the new construction on Bill Wittmeier Supply Company on the corner of 1st avenue and 3rd street. This photograph, made at the mid-point in the addition of the second floor to the structure, shows the heavy steel beams being erected.’ -The Southern Democrat, August 25, 1955

[This month’s segment deals with businesses in the beginning half of the 300 block of First Avenue, East, over 1955. Once again, I explain that I obtained a 1955 telephone directory as a key source for this series and that 1955 falls almost mid-way between Oneonta’s 1891 incorporation and 2018. Any readers who have appropriate additional information or corrections, please contact The Blount Countian.] 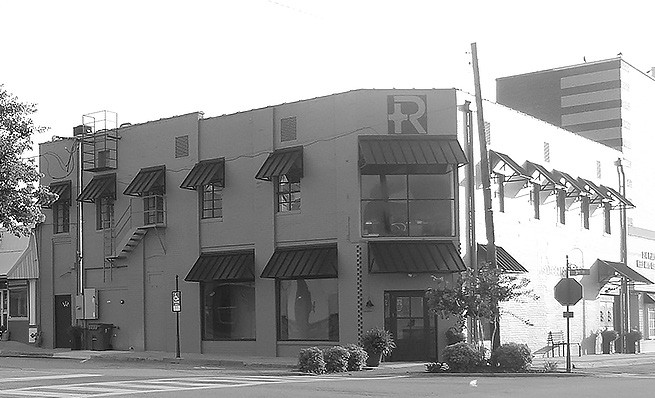 The 300 block of First Avenue East underwent a skyline change in 1955 as Bill Wittmeier added a second story to his Bill Wittmeier Supply Company. The Southern Democrat covered that addition with article updates and, at least one photograph of the construction. According to a front-page story on Oct. 13, over 5,000 people attended the three-day open house featuring the second floor which housed toy, gift, and houseware departments. 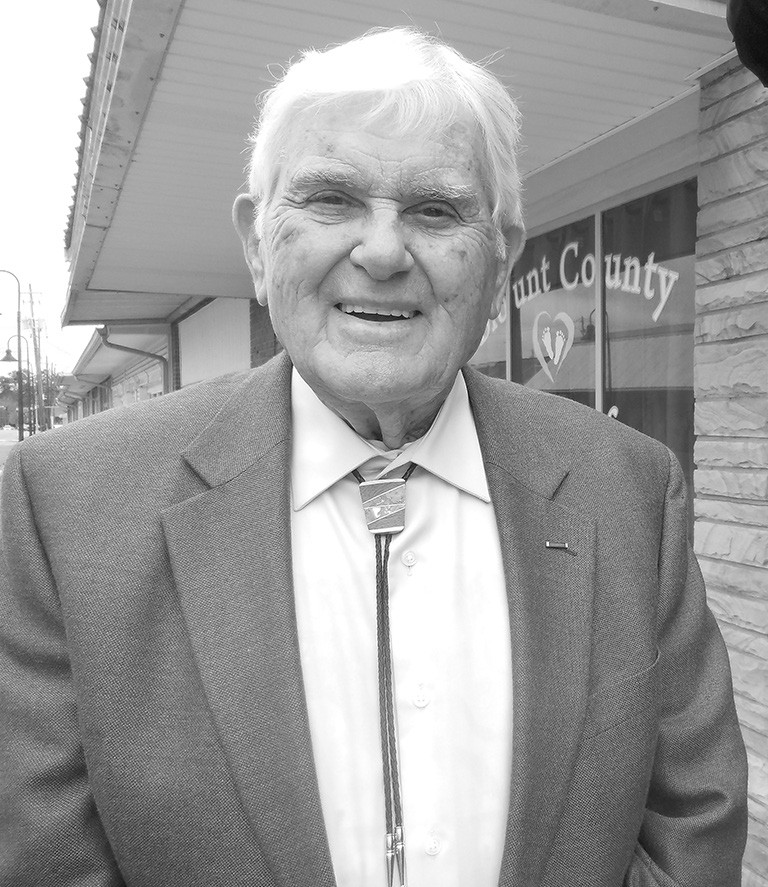 The listing under William Stodghill Wittmeier, in the 1976 edition of the Heritage of Blount County, records his education as including Marion Military Institute and The University of Alabama. During World War II, he served in the U.S. Army Air Corps, Burma-China Operations.

The entry notes his marriage to Nedra Roberts, who would serve many years as the grammar school librarian, and his farming operations along with his later Ace Hardware. According to Leto Curl, whose father W.E. operated a grocery store in the block, in its early days the hardware offered a variety of Army surplus items. 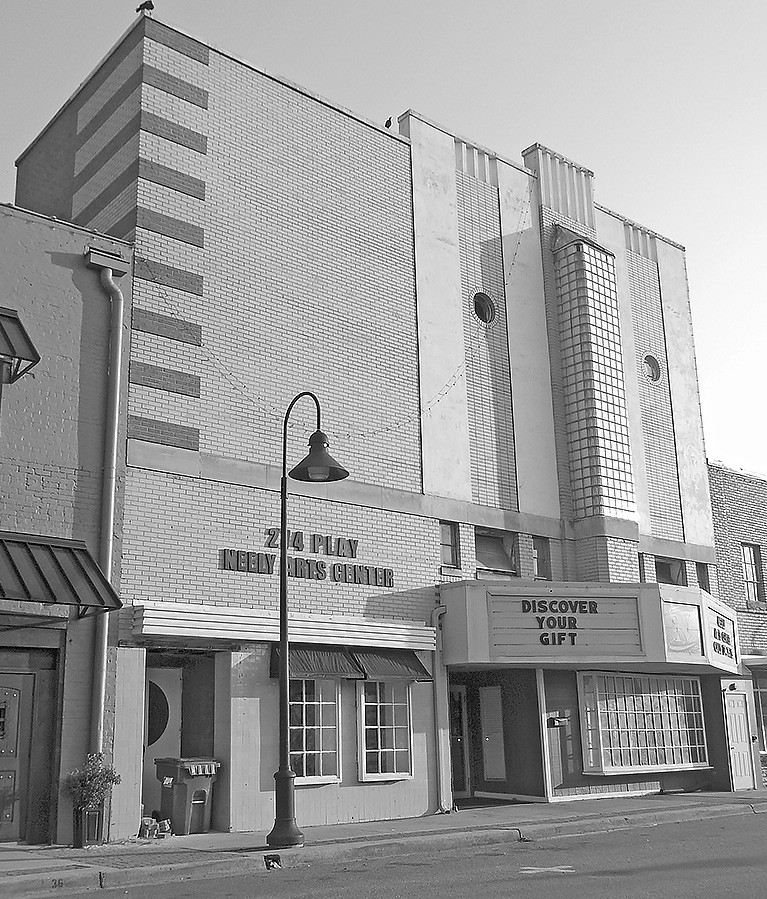 That business would move to its present location on the corner of Second Avenue East and Second Street North, after Oneonta Motor Company vacated there. The building on First Avenue housed various other businesses over the years before its present use as The Redeemer Church (below).

Some say a small shop existed between Wittmeier’s and the Neely Theatre (306) at some point, but by 1955, the Neely adjoined the hardware. Charlie Hendrix recalls some controversy over construction of the Neely during the war period.

He says farmer-rancher, businessman, doctor, politician, and at the time probate judge J. S. (Joseph Schoolfield) Wittmeier built the building, getting hard to obtain steel, while the planned bridge over the railroad leading into town from Spout Springs languished. Some questioned how that came about, but the theatre did serve the public good, providing important rationing and post-wartime diversions.

At 308, Mary B. Engle had her dress shop. Engle, herself, offers an interesting story. As recorded in Heritage of Blount County, Mary Bowerman Engle enjoyed achievements beyond that of most women of her day. That account notes she valued education and would, as a child on each Monday of the school year, walk from her home in the Joy Community to Blountsville, board there, and then walk home each Friday afternoon. 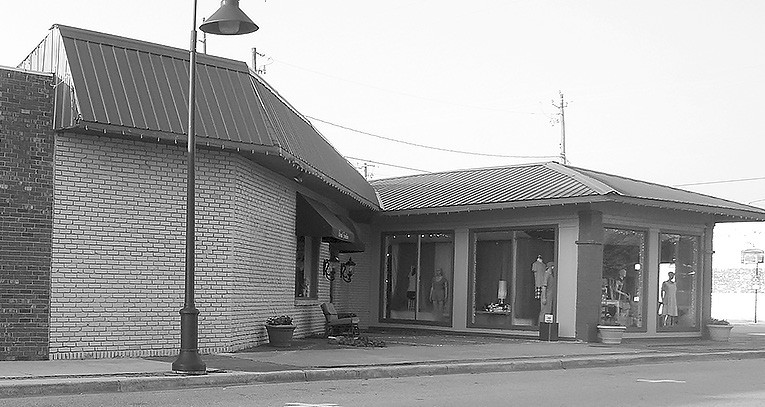 The biography continues, crediting her brothers with helping her to attend and graduate from Alabama College (Montevallo) in 1931. She worked variously as a teacher, home economists for the Farm Security Administration and, later, Alabama Power, as well as operating her dress shop. Childless herself, she became mother to husband William G. Engle’s daughter Billie Ann (Mrs. Donald Standridge). After William’s death, Engle had a second marriage to a Rev. J.W. Askew.

Brothers Everett M. and (Henry) David Peck operated Peck’s Variety, Gifts, and Jewelry at 310. Betty Musick Smith, who worked for a time at Peck’s, and Curl recall the variety or dime store, managed by David, occupied the front of the shop and the jewelry, under Everett, the back.

Smith says she has a silver or possibly silver-plated filigree ring and bracelet, which are two of her favorite pieces and which she purchased in a yard sale from the wife of one of the Pecks. Asked for more details of the shop, Smith professes lack of recall and jokes her main interest as a teenager was in meeting boys working at other shops.

Several have confirmed that in the past days of parent purchased textbooks, Peck’s served as the local supplier. That practice ended in Governor George Wallace’s first term (1963-67), when the state began furnishing most of the books.

Chambers Hardware covered 312-316 on the street. Albertville native William M. Chambers had established the business which by 1955 included Coach C. (Clair) Strickland. The 1976 edition of Heritage of Blount County reveals Chambers as an Albertville native married first to Vera Birdsong and later to (Elizabeth) Nell Brown. His and Vera’s son, William Glennis Chambers, briefly owned the funeral home at 100 First Avenue East, as noted in the earlier material on that block.

According to Strickland’s 1979 obituary in The Southern Democrat, that Marshall County native, won local recognition for his years in education. Coming to Blount County High School in 1938, Strickland coached, taught, and served as principal prior to his retirement in 1950. The World War I veteran reportedly enjoyed five undefeated seasons while coaching football at the school.

According to Curl, Robert Ellington Clowdus took over operation at one point, before James Whited would eventually claim and rename it Whited’s Hardware.

Behind Chambers lay a blacksmith shop at one time, important when some Oneonta shoppers still arrived on Saturdays in buggies.

Back on First Avenue or Main Street as many so called it and adjoining Chambers, one would have found Herb Masters’s American Shoe Shop at 318. By 1955, Herbert R. “Hub” Masters had completed his 11th year in business at the shop.

Growing up in Vincent, Ala., according to a Jan. 8, 1978, article in The Birmingham News, Masters had seen most of his neighbors pursue farming as vocations but he wanted something else. Visiting a cousin in Talladega who owned a shoe repair business there, Masters decided to enter that trade.

A Dec. 28, 1977, article in The Southern Democrat, reads, “’I had 30 days of teaching from Gene Turner in Vincent,’ the shoe repairman says, and his wife Mildred adds, ‘and then he learned the rest on his own.’”

That piece relates Masters’s evaluation of shoes and differences in men and women’s attitudes toward repair. The article claims he felt women preferred to buy their relatively inexpensive shoes and pursue changing fashions rather than bring in any which might need repair.

Men might have their shoes resoled several times. The article alleges Masters credited Oneonta general merchandiser John Hyde with “the record for half-sole repairs having had one pair of shoes half-soled six times. ‘I think he must have liked them,’ [he] says with a grin ‘because he had a store full of shoes.’”

Present Oneonta Mayor Ross Norris recalls Masters would repair shoes for young ballplayers and never take payment. In his own case, Norris tells the craftsman took a regular catcher’s mitt, carefully removed the stitches, turned it inside out, and then re-stitched it for the southpaw Norris, asking no pay.

Curl, who notes he and Masters’s son (Donald) Ray were the same age, recalls the shop had a mechanical buffer he would frequent to shine his shoes. He reports “Hub” sold the shop to Calvin Tuck, who, at his retirement, sold to another who relatively quickly liquidated the assets and closed the business.

Across the street and heading back toward its beginning on Third Street North, Dr. C.V. (Clive Vernon) Hendrix had his office at 315. The Parsons, Tenn., native graduated from the University of Tennessee Medical School in Memphis in 1927, according to the 1976 edition of the Heritage of Blount County. That entry reports Hendrix came to Oneonta in 1929 as the county health officer and would later go into private practice.

The year after his arrival, he married Florence Denton, daughter of Dr. N. C. Denton who died in 1955. Hendrix, a U.S. Army and World War II veteran, served in the military from 1940 into 1942 and for a time as medical examiner for the Selective Service (Draft) Board. He retired from active medical practice in 1969.

Beside his office at 313, stood Vera’s Beauty Shop. Unfortunately, efforts to learn more of the shop have failed.

W. E. (William Edward “Ed”) Curl operated his grocery at 311. Son, Leto, explains the store operated from 1951 to around 1957 or 1958. He says his dad had worked at Worth Ratliff’s store in Blountsville and then began cutting meat for long-time Oneonta-Blount County grocer Homer Morton. According to the retired postal worker, Joe Tidwell, of Little Joe Restaurant fame, had started his own store at the location and that his dad bought the store and stock from him.

Leto recalls that most of the residents of the Cheney Lime Company-town bought groceries from his dad. He says he would usually make runs to the area on Fridays and Saturdays to deliver the groceries.

Customers would telephone their orders, each of which would then be put in wooden bread trays. Curl would then take those in a driver-seat-only panel delivery truck to the quarry-area houses. His dad left the grocery business in the later 1950s, becoming a Church of the Nazarene minister.

Curl recalls two barbers, Birl King and a Mr. Brooks, at the Ace Barber Shop, which he says lay adjacent (309) to his dad’s store. While Curl may be fuzzy on one of the barber names, he remembers well William Stockdale, who had the sidewalk shoeshine stand in front of the shop. He offers that great compliment for any shoeblack, “He could really pop a rag.”

One account had listed the local chamber of commerce at 309, but none have been able to confirm that or any other address for the chamber at the time. The 1955 telephone directory lists Farm Bureau at 311. Curl, again, assures that Farm Bureau did not operate out of his dad’s grocery.

Dick Guyton’s Farm Bureau advertisements in The Southern Democrat at the time placed his office “across from the Neely.” So, too, did advertisements for the Sportsmen’s Billiard Parlor. The Blount Countian solicits readers who have information on those businesses or address clarifications to contact the newspaper.

Bains Service Station occupied the southwestern corner of the First Avenue and Third Street intersection at 301. A. S. (Albert Sidney) Bains III, owned the station and the Bains Oil Company. His entry in the Heritage of Blount County 1976 edition lists him as petroleum consultant, marketer, and president of Bains Oil Company.

The building itself held various tenants following its use as a service station. A few years ago owners enclosed the previous drive-through which had allowed protection from rainy weather as attendants pumped gas for their customers. Many residents still refer to the building by their common memory as the old Dogwood Inn, and now DD’s Place (below).