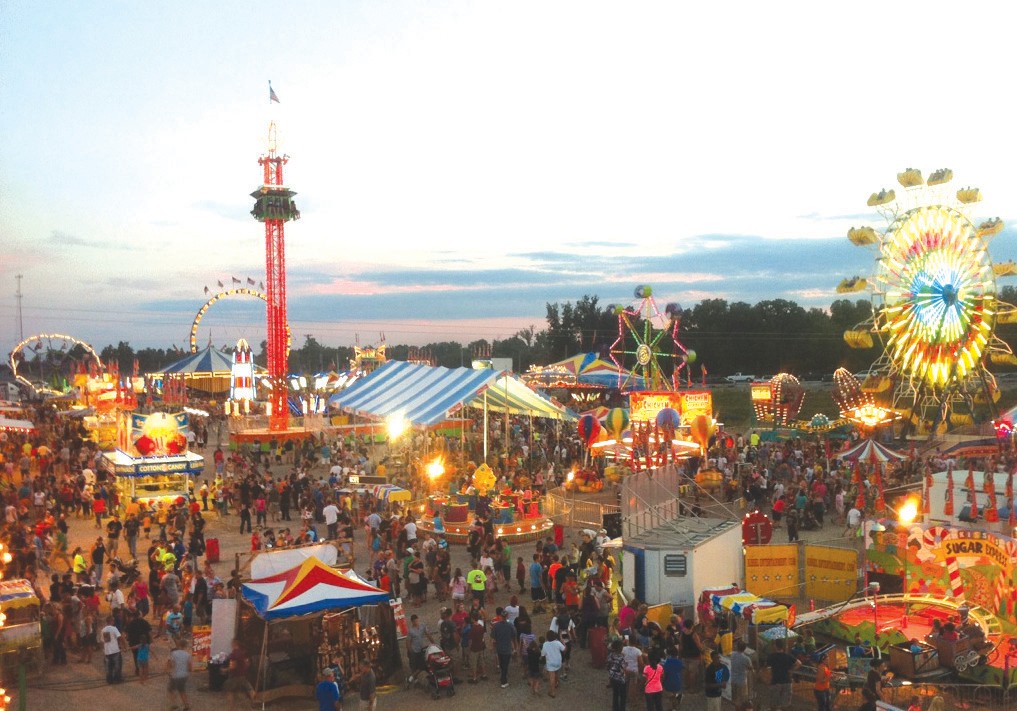 That’s how Blount County – Oneonta Agribusiness Center director Keith Hamby describes the Blount County Fair, scheduled for Sept 18 – 22 this year. That’s next week, folks – starting Tuesday afternoon at 5 p.m. (and each afternoon thereafter) and running through Saturday at 11 p.m. or whenever the last partyers leave! Don’t miss the fun. Below are some reasons to come, and some things to be sure to seem (They’re all mixed in together. Sort’em out for yourself.) l. Everybody’s there: from your favorite BFFLs to your gag-a-buzzard frenemies. Translation for the older generation: your best buds and lifelong mainstays to the guys and gals you love to hate. Hey, it’s a big-time social occasion.

2. It’s budget-sensitive: $10 a head on Tuesday and Wednesday and $12 a head Thursday through Saturday, gets you in the gate, access to unlimited rides, and a welcoming smile to a dizzying variety of events. It’s cheap (everyone hates that word when applied to their own events but loves it when deciding how to spend their time and money) considering the fantastic range of activities it admits you to.

3. Speaking of which – the fantastic range: livestock and assorted exhibits and competitions, like an old timey fair: 1,608 exhibits* including produce, canned goods, sewing, flowers, art, crafts, photographs, hobbies, and more animals than you could ever imagine, not to mention actual entertainment performances – all tended to and presented by more than 600 people. And that’s ALL FREE once you pay the admission charge at the gate.

4. You can only get fair food at the fair. You do have to pay separately for it, but considering you can only eat this way once in awhile, it’s well worth it. Need a reminder? Funnel cakes, chicken on a stick, meatball subs, polish sausage dogs, Philly cheese steak, chicken pizza, candy apples, cotton candy. And there’s lots of Mexican and bar-be-que, too. Research has shown it all tastes better at the fair.

5. It’s astoundingly clean, safe – and bigger ‘n better than fairs in surrounding counties, even in larger cities. That’s why it brings in folks from all around. That’s why you should enjoy it – because it’s so convenient. Research has shown – nevermind – we’ve already used that one.

6. See the world! Come to the fair! See the world of Blount County in microcosm (Ya like that? Means “the whole world in miniature-like”). Seriously, almost everything going on in the county is reflected in some way at the fair. There’s participation, not just from the aggie types, but from garden clubs, civic clubs, culture clubs, river clubs, bridge clubs, covered bridge clubs, a quilters club, women’s clubs, golf clubs, oops, forget that one, fire departments, school boards, and an array of government entities and agencies – not to mention a gazillion volunteers from all walks (and clubs) of life. And so on.

7. Rides and games. Lotsa rides and games. Kids don’t need a bunch of fancy details. Just tell’em rides and games. And more rides and games. You do pay-as-you-go for games, but the rides come with the cost of admission. Just throw the kids a 10 (maybe a 20 if there’s several of them) and cut’em loose and go enjoy yourself. It’s a safe place for family fun. May cost you more than that one bill to keep the kids happy, but hey, give it a try.

8. It may be your lucky night. Drawing for a $100 cash prize held 10 TIMES every night. You got a real shot! No questions asked if you’ve got the lucky ticket number.

Do yourself a favor; show up at the fair. * There’s some old time carney gimcrackery involved in that number, but hey, figure it out for yourself! Hint: every jar of candied okra counts toward that total!