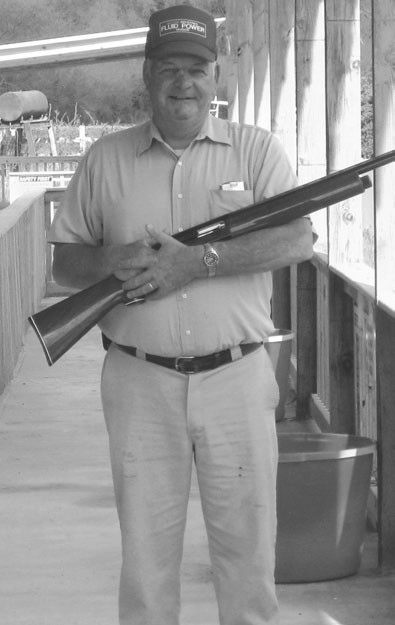 Owner Robert Bullard welcomes shooters to his new shooting range and game preserve in Big Spring Valley. Visible in the background is part of the preserve’s 500 acres, with the Sand Mountain escarpment as backdrop.

A new sporting clays shooting range will open Saturday, April 4, located off Ala 79 north of Brooksville, near the Marshall County line. Two shelter buildings provide 10 shooting stands, with seven traps serving one building and a wobble trap serving the other. The wobble trap is mounted to provide eccentric release positions whereby various, impossibleto anticipate flight paths can be simulated from a single machine.

The setup makes it possible to simulate incoming waterfowl, high-flushing pheasants, or a quail covey rise, as well as popular games like Make-or-Break. The range will be open from 8 a.m. to dusk Fridays and Saturdays and 9 a.m. to dusk on Sundays.

Proprietor Robert Bullard of Brooksville said that following the opening of the shotgun range this Saturday, he will add both a rifle range and a pistol range to the 500- acre complex. The rifle range will have targets stationed at 100, 200, and 300 yards. Both the rifle and pistol ranges will be open by June or July, he said.

Quail hunting is also available and a deer-hunting area will be ready for the fall deer season. The deer area will allow bow hunting only. The preserve will also provide dove-shooting in season, and pheasant hunting year-round when it becomes fully operational.

Bullard said the nearest similar range is located in DeKalb County, adding he expects to have significant business from the Birmingham area, as well as from neighboring towns of Guntersville, Albertville, Arab, and Oneonta. Cullman and Gadsden are also within easy driving distance.

“People in towns don’t have any place to shoot their guns any more,” he said. “This will give’em a place to come and shoot as much as they like. It’s also a good place for kids to learn to shoot, and I know we’ll have the 4-H and Boy Scouts coming out here with their leaders to teach them. I really like working with the kids even better than the adults,” he said.

The price for 50 shots at clay targets is $20. Ammunition is sold on site, and vending machines are available for snacks and drinks. The course brochure says it will support the community by hosting charity and benefit events.

Asked why he decided to open the business, Bullard replied: “I’ve worked all my life and I reckon I’ll work ’til I die. When I retire as commissioner, this will give me something to do to keep me occupied and make a little money at the same time to help out with my retirement. I won’t make no killing on it – that’s not why I’m in it – but it’ll help us keep the bills paid.”

To reach Big Springs Hunting Preserve and Sporting Clays, drive north on Ala 79 for about 5 miles beyond its intersection with U.S. 278 at Brooksville. Turn right on Vaughn Road. The range is on the left less than a quarter mile beyond the turn.