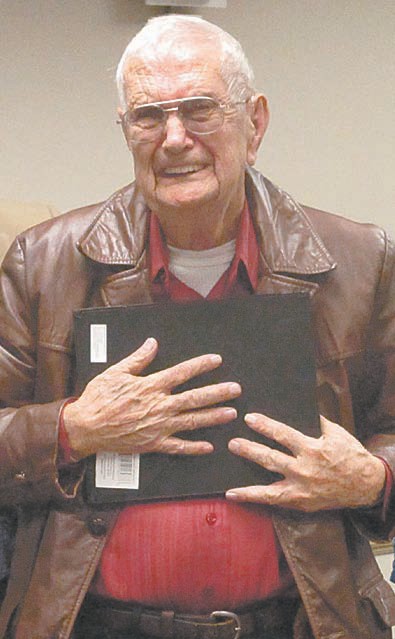 Dewey Yarbrough received his high school diploma Monday – at the age of 87. You might say it was a little late – nearly 60 years – through no fault of his own. He attended Walter Junior High School in Cullman County, until being drafted in 1950 to serve in the Korean War.

After returning from the war in 1952, he met and married his wife Yvonne and attended Cleveland High School to earn his diploma, which he did in 1957, courtesy of the U. S. Army, and while working at Hays Aircraft in Birmingham. ‘I graduated and I paid $15 for it,’ he said stoutly, referring to his diploma, ‘but I never got it.’ It doesn’t look like it hampered him much.

He later transferred to Huntsville where he worked as an electrician and inspector on the Saturn 5 spacecraft. He and Yvonne have been married 64 years, retiring from the restaurant business after owning and operating three restaurants.

The diploma, while a little late, was a big surprise. He thought he had been invited to the school board meeting to see his great grandson, Zak Hand, an ace golfer, receive a golfing award.

Assistant Superintendent Stoney Beavers broke the news to Dewey this way: ‘Mr. Yarbrough, we actually brought you here today under false pretenses. Although Zak is a teriffic golfer, he is not receiving any awards today. We are here today to honor you.’ Judging by Dewey’s look as he accepted the diploma, he was certainly surprised. The Yarbroughs reside in Cullman.