A LOOK INTO THE WORKDAY OF AN ONEONTA FIREFIGHTER 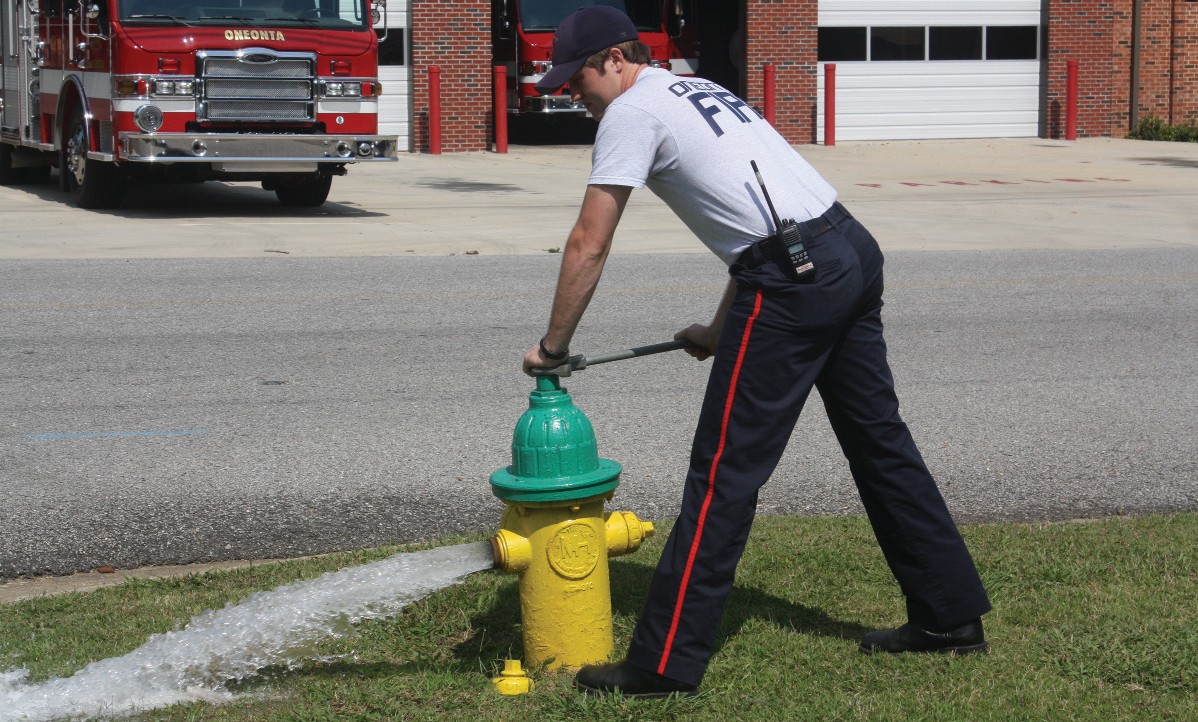 At certain times in the dead of the night, while the rest of Oneonta sleeps, a select few are willing to answer our community’s call for help. These individuals could be responding to a medical call, extracting a person from a wrecked vehicle, or fighting to save a family’s home from being burned to the ground.

Firefighters spend hours studying and undergo strenuous training to prepare for what may lie ahead of them when they receive a call, and in those rare cases when we are in trouble and in need of help, they may be the ones we depend on to save our lives.

However, amidst the stress and hustle of a firefighter’s life after they receive a call for help, the rest of their day remains somewhat calm. A better explanation of this would be their daily chores. 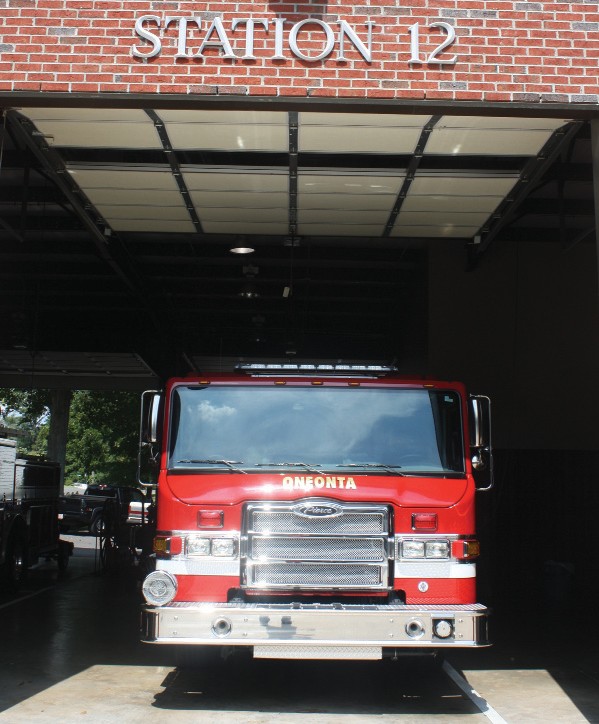 The Oneonta Fire Department houses two fire trucks at the main station and another at the Limestone Springs station.

Mondays are for pre-planning. Firefighters go to different businesses and churches and venture through the building deciding what the best plan of action would be if a fire occurred there. On Tuesdays, they wash and sterilize their two 22-ton firetrucks. Wednesdays and Thursdays are designated for various cleaning activities, and on Friday they work outside, mowing grass and doing other work around the station.

The firemen have plenty of time to finish their daily chores. At the Oneonta Fire Department, firefighters work for 24 hours and are off for 48 hours, 7 a.m. – 7 a.m. Amazingly, even though those hours already seem rough, most firefighters choose to work another job in a firefighting or paramedic-related field with the same working hours. With two jobs this leaves them working 48 hours on and only 24 off.

The Oneonta Fire Department has two stations, one on 3rd Avenue East and one located in Limestone Springs. Three separate shifts – A, B, and C – consists of five different firefighters who rotate at the department. Every firefighter must train for 10 weeks while studying everything from pump operation and climbing ladders to survival techniques. At Oneonta, the department strives for every firefighter to also be a registered paramedic, according to assistant fire Chief Brandon Horton. Therefore, those individuals must attend paramedic school which consists of four semesters. Even if an Oneonta firefighter isn’t a paramedic or is currently going through training, when the department receives a call, at least one person on the truck is a paramedic and trained in advanced cardiac life support. Oneonta firetrucks are as medically well-equipped as an ambulance. Everything needed to care for a person is on the truck.

“We can do everything an ambulance can do except we don’t have the cot in the back,” Horton said.

Another task the firefighters will soon be undertaking is hydrotesting. The department hydrotests every two years, which is required by the Insurance Services Organization (ISO). In Oneonta, there are four different-colored hydrant tops – red, orange, green, and blue. Each of these colors represents a certain amount of water pressure that a hydrant contains. Red is the lowest pressure with 500 gallons of water per minute, orange is 500 to 1000 per minute, green is 1000 to 1500 per minute, and blue contains the highest pressure of at least 1500 gallons a minute.

From Sept. 3 to Sept. 28, Oneonta firefighters will be testing these hydrants. Firefighters will check for functionality, and this procedure flushes out old water and allows new water to come in. By doing this, the department is also able to determine the availability of the water supply in each area of the city. Therefore, the firefighters are able to determine how much pressure they can be expected to have if they were to need to fight a fire in each area, and they can determine how much water will be available during different times considering more water pressure is expected at night than in the morning.

“We take overall average to determine what pressure will be given at any given time,” Horton said.

In turn, the insurance companies are able to decide how much fire insurance each house should have to pay.

Considering each shift is on duty for a 24-hour period, Horton says it is important for the firefighters to pace themselves. After the crew finishes their daily chores, they are free to relax and rest until they receive a call for help. At the Oneonta Fire Department, the firefighters have a large living area with a television, kitchen, table, and a sitting area. However, even on their downtime the firefighters may be finishing paperwork or doing something fire related, according to Horton.

The job doesn’t consist of a continuous 24-hour working day; plenty of time is left in the day to unwind and just hang out. Horton says the group is a family, and they act like it, whether that be confiding in each other or playing practical jokes.

Horseplay is a staple at the fire station, and the group has graduated from the whoopee cushion into full-fledged jokesters. Definitely don’t leave a drink sitting around. That’s basically asking for someone to do something to it. But when that siren sounds, all horsing around ceases.

In the last five years, the department has rescued two people from a burning building. The emotional toll that comes with being in this field can be overwhelming, but the crew is able to overcome that.

“You have to deal with it in your own way or it will eat you up,” said Anthony Colafrancesco, a 15-year Oneonta fireman.

That’s where the family atmosphere is helpful again. The guys say they rely on each other for support after a bad day or even weeks, and not only is their firefighting family behind them, but Horton praises the wives of the firefighters for always supporting them.

“We couldn’t do what we did if our wives weren’t there,” he said.

The fire department has come a long way since it was established in 1924. Now, the department operates 24 hours with five firefighters, who are in most cases trained paramedics. In 1938, the fire chief was paid $3 a month and there were eight firemen who were paid $1 per call.

The department also advocates other important causes. In the coming month, the group will be changing their normal gray “Oneonta Fire” attire to a breast cancer awareness shirt. After one month of the new look, the shirts will be for on sale to the public with proceeds going to cure breast cancer.

“We want to reach out to the public and help them as much as we possibly can,” Horton said.