Bean selected finalist for Lineman of the Year 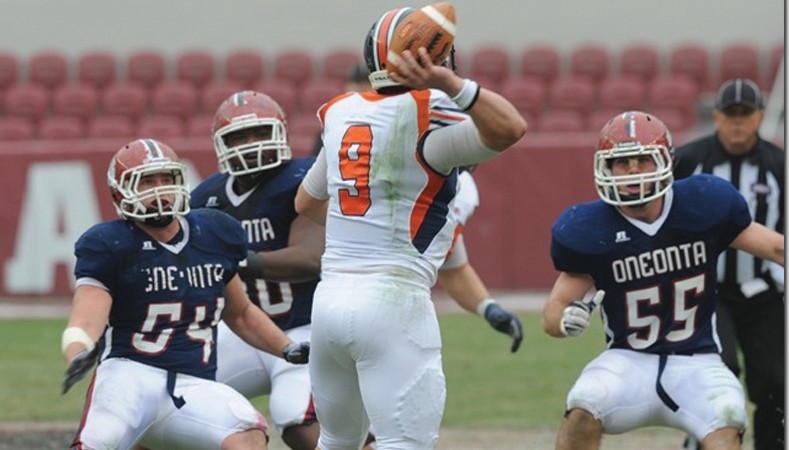 Redskin defensive lineman Blake Bean (54) is a two-time all-state selection and nominee for 4A Lineman of the Year.

“We learned our lesson last year,” said one head coach about Oneonta senior defensive lineman Blake Bean. “We avoided him and if we did run to his side we had two (blockers) assigned to him.”

Bean was named a finalist for 4A Lineman of the Year by the Alabama Sports Writers Association (ASWA). It is the second year in a row that Bean has been selected as a finalist and also the second straight year that he has been a first team all-state selection.

He finished the 2013 season with 103 tackles (third on the team) and his 24 tackles for loss was second highest among Redskin defenders. Despite playing through double-teams, he finished with seven sacks which tied for the team lead.

“He plays harder than anybody up front,” said Oneonta coach Don Jacobs. “He plays hard every play – he never takes a play off. He just simply does things the right way and a lot of coaches noticed him. His numbers were not what they were last year but there was a reason for that. Every team we faced put a tight end on his side most of the time and doubled him (with a tackle).”

Bean might not have had the statistics this year but his impact was felt by opposing offenses.

“He was the one defensive lineman that we felt we had to scheme against,” said another opposing head coach. “He’s not the biggest lineman we faced – although he probably has the frame to add another 30 pounds in college – but he was definitely the total package. He is quick off the ball and strong and he plays with great leverage.”

Charles Henderson linebacker Richard McBryde and Dora defensive lineman A.J. Smoot, both juniors, are the other finalists for 4A Lineman of the Year.

The winners in each class – along with the ASWA’s annual Mr. Football and the Super 12 team – will be announced Jan. 15 at the annual banquet in Montgomery, sponsored by the Alabama High School Athletic Directors and Coaches Association.